An Old World vampire comes to modern day Manhattan in the first season of FX's hit series The Strain. It's a genuinely creepy and provocative series with a slightly different conception for the bloodsucking that is tantamount for vampire lore. Conceived by director Guillermo Del Toro over a couple of decades and adapted by Del Toro and Chuck Hogan from their book series for television, the television series will seem both novel and familiar to viewers with antecedents to vampire legends of old yet modernized for the New Millennium. In fitting with its status on cable, the series is also uber-violent, but it also earns honest suspense to go along with some nasty shocks along the way. Horror fans should be thrilled with it. 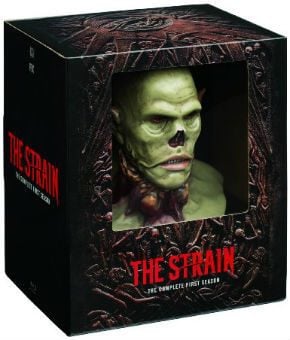 When a jetliner lands in New York City with almost its entire passenger and crew contingent dead, the Center for Disease Control suspects an airborne pathogen of some kind onboard the plane. Sent to investigate are doctors Ephraim Goodweather (Corey Stoll) and Nora Martinez (Mía Maestro) along with their associate Jim Kent (Sean Astin) who find peculiar looking worm-like parasites on board and a huge carved wooden box along with four survivors who had appeared at first to be dead. An old man at the airport, Abraham Setrakian (David Bradley), claims to know exactly what’s going on with these strange “living dead” survivors, but he’s passed off as a crackpot and arrested for carrying a concealed sword in his walking stick. It turns out, however, that the survivors are indeed carriers of a special kind of toxin and that the other dead bodies on the plane aren’t really dead either. As the season develops, the story turns into a modernized vampire saga with the Master (voice by Robin Atkin Downes, physical presence by Robert Maillet), his right hand man Thomas Eichorst (Richard Sammel) and an elaborate plan to infest the city with these creatures financed by dying billionaire Eldritch Palmer (Jonathan Hyde) with our protagonists trying desperately to stop them.

Fans of the Dracula legend will see counterparts for Dracula, Renfield, Van Helsing, and the like in the storytelling for these thirteen episodes, but the method for vampire conversion is a fresh approach to bodily invasion, and the plan which involves the Master counting on the strength of love to help his scenario to succeed is rather ingenious. The episodes each contain at least one big “boo” moment and lots of sequences where suspense is cranked to the max (though the trope of a person alone and unarmed wandering around a place thought to be infested with creatures and then being surprised by one or more of them gets really old the tenth or twelfth time it’s done). Certainly, during the thirteen episodes, there are some other infuriating moments when people hesitate to believe what they’re seeing even with the evidence right before them or hesitation to act when their own lives are on the line and physical ailments happening at the worst possible times (but then recovering almost immediately). The show’s writers do an excellent job setting up all of the major characters’ story arcs, each of them with massive family problems (a deteriorating marriage, a mother with Alzheimer’s, a wife with cancer) which color their actions throughout the season along with providing backstory on the show’s Van Helsing stand-in Abraham Setrakian who first came into contact with the Master in a Nazi concentration camp in 1944 and again in 1967 and has been preparing to do final battle ever since. The series is not above killing series regulars long before the end of the season making certain the audience realizes that no one is safe from harm.

Casting for the series is mostly superb with Corey Stoll as the CDC doctor trying first for containment of the vampires and later simply fighting for his life and David Bradley as the aged vampire hunter tops in the acting department. As the Master’s human representative Thomas Eichorst, Richard Sammel couldn’t be more suavely creepy relishing his every moment on-screen while carrying out the nefarious plan. Kevin Durand as a pest exterminator who gets caught up in the search for the creatures is also strong along with Ben Hyland as the young son of Eph Goodweather and Mia Maestro who has fallen in love with her fellow doctor during his separation from his wife (though a torrid love scene between the two seems ill-conceived halfway through the season). A subplot featuring promising boxer Gus Elizalde (Miguel Gomez) seems tacked on throughout the season, but his purpose becomes clear in the season’s final episodes.

Here are the thirteen episodes contained on three Blu-ray discs in the first season set. The names in parentheses refer to the commentator for that episode’s audio commentary.

The series is framed in its widescreen television aspect ratio of 1.78:1 and is presented in 1080p resolution using the AVC codec. The pilot “Night Zero” runs seventy-one minutes and is of feature film quality in look and sound, but subsequent episodes look just as spectacular. Sharpness is superb (even with all of the CG work which is necessary for the “vampire” special effects to work), and color is rich and deep with accurate skin tones except in the 1944 and 1967 flashbacks where color has been desaturated to reflect a different period of time. Contrast is consistently maintained, and black levels are awe-inspiring, necessary for a series where nighttime visuals and scenes shot in dark spaces are plentiful. When they're used, subtitles are in white and are very easy to read.

All of the episodes have a DTS-HD Master Audio 5.1 sound mix, superior to broadcast quality and among the best available soundtracks for a television series on home video. The pilot’s mix was feature film reference quality, and while regular episodes don’t always contain the same amount of surround elements (more front effects and less attention to the rear channels), what’s provided is fine indeed with dialogue easy to understand and placed in the center channel, and Ramin Djawadi’s unusually suspenseful score getting nice spread throughout the soundstage.

Audio Commentary: creator-director Guillermo Del Toro takes the pilot and producer Carlton Cuse takes the finale episode, both describing in detail how they came to work on the series and their hopes for its quality and for the future. Cuse runs out of background and begins describing scenes from the show before it’s finished, but Del Toro’s comments are quite interesting.

Deleted Scenes (24:34, HD): twenty scenes spread across the three Blu-ray discs are presented in montage on each disc.

A Novel Approach (9:38, HD): Guillermo Del Toro and Chuck Hogan describe their three-volume The Strain book series on which the series is based and then discuss how they’re able to enrich their original efforts with new characters and more background on already established ones. Also speaking about the books and their relationship to the series are producer Carlton Cuse and actors Corey Stoll, Sean Astin, David Bradley, and Richard Sammel.

He Is Here (9:22, HD): a discussion about the creation of The Master character for the series, making him a mixture of a living actor (Robert Maillet) and digital and make-up effects (which take four hours to apply). Also commenting are Carlton Cuse, Guillermo Del Toro, Corey Stoll, Sean Astin, Richard Sammel, and Jack Kesy (who plays a rock singer who’s turned).

Setrakian’s Lair (9:47, HD): actors David Bradley and Mia Maestro give a tour of the underground armory set where vampire hunter Abraham Setrakian has accumulated weapons and equipment for killing and protection.

Packaging/Figurine: in this special promotional release of season one (the regular season one Blu-ray set was released in December 2014), a container modeled on the heavily carved wooden coffin for The Master and containing a rubber bust of The Master’s upper torso is included.

A much more effective horror series on FX than the more heavily publicized American Horror Story, The Strain had a very successful first season. It will be interesting to see if the second season which picks back up in July can sustain the storytelling so deliciously accomplished in season one. For those who are horror aficionados and who want a slightly different take on vampire stories, The Strain is for you.

Thx for sharing. Can't wait to order one.
You must log in or register to reply here.