That title is on my want list too, so I wish I knew the "algorithm" they use to decide when to release something on BD vs streaming. Hopefully with the Paramount Presents line that means we won't be waiting almost 5 years to see a BD release, as we did with Roman Holiday. I'm in for this -excellent movie .
Reactions: battlebeast

Dick said:
Yup, and I'm glad you're happy with those as opposed to owning physical discs. Guess I'm just an old dog.
Click to expand...

battlebeast said:
Some of us PREFER physical media.
Click to expand...

I never said I wouldn't buy those titles on Blu-ray so don't give me this crap about not preferring physical media.

StarDestroyer52 said:
I think Robert was just trying to point out what titles could be likely to come to BluRay since there in HD. I’m wondering myself if A Place in the Sun could be a Paramount Presents title which would save me from getting the Imprint version.
Click to expand...

Exactly! There are several Paramount titles having Blu-ray releases on September, 15th. Today, I pre-ordered five of them even though I previously purchased them digitally in HD.

Robert Crawford said:
I never said I wouldn't buy those titles on Blu-ray so don't give me this crap about not preferring physical media.

Exactly! There are several Paramount titles having Blu-ray releases on September, 15th. Today, I pre-ordered five of them even though I previously purchased them digitally in HD.
Click to expand...

Which ones are those? Where can I find the list of Paramount releases and release dates?

battlebeast said:
Which ones are those? Where can I find the list of Paramount releases and release dates?
Click to expand...

Look at my signature as the Pre-Order Listing is right there at the top of it.

In order to correctly credit Dalton Trumbo, do they have to create a whole new screen card with his name on it, or can they fix the scene digitally? How would they do that?

battlebeast said:
In order to correctly credit Dalton Trumbo, do they have to create a whole new screen card with his name on it, or can they fix the scene digitally? How would they do that?
Click to expand...

I don't know, but I just watched the opening credits on iTunes and it is seamless from the rest of the credits. If I had to assume, they did something digitally.
Reactions: battlebeast

I was watching the video on the 2002 restoration (was that more of a digital cleanup?) and starting around 5:00 mark they say to fix the Dalton Trumbo story credit then, they were able to access the same stock footage and recreate the titles that way. I'm presuming the same method was used to add the additional co-screenwriter credit.

I went to a Fathom screening of Roman Holiday a couple of years ago. It looked beautiful; it had the Trumbo credit restored as well. How will this translate to a BD, who knows.
Many decades ago I saw a 35mm print in NYC. It looked beautiful then.
Reactions: Osato

Ronald Epstein said:
Have never seen this film and am looking forward to buying it on Blu-ray! Glad Paramount is digging through their archives. I think due to this pandemic and a lack of new films being made, we will perhaps see more great gems from this studio finally released in HD.
Click to expand...

Ooh! I envy you getting to see Roman Holiday for the first time. Peck and Hepburn at the top of their game.

Timeless Classic is Latest Addition to the Paramount Presents Line​

HOLLYWOOD, Calif. – The treasured and enduring classic ROMAN HOLIDAY debuts on Blu-ray for the first time ever as part of the Paramount Presents line on September 15, 2020 from Paramount Home Entertainment.

The exquisite Audrey Hepburn lights up the screen in her first starring role opposite the charismatic Gregory Peck in this funny, beautiful, and intoxicating romantic comedy. Ranked as the #4 greatest love story of all time by the American Film Institute, ROMAN HOLIDAY earned 10 Academy Award® nominations, including Best Picture, and won Best Actress for Hepburn, Best Costume Design for legendary designer Edith Head, and Best Writing for Dalton Trumbo.

Director William Wyler’s 1953 fairy tale was one of Hollywood’s first on-location motion pictures and memorably captures the bustling streets and iconic sites of Rome. ROMAN HOLIDAY expresses the exhilaration of joyously breaking free as the lead character escapes her royal obligations against the backdrop of post-war Europe embracing long-awaited peace.

Screenwriter Dalton Trumbo was blacklisted for refusing to cooperate with the House Un-American Activities Committee and his name was not included in the film’s original credits. In 1992 the Board of Governors of the Academy voted to finally credit Trumbo for the “Story Writing” Oscar and his widow received a statuette in 1993. In 2011, the WGA restored Trumbo’s name to the screenwriting credits. This is the first physical home entertainment release to correctly credit Dalton Trumbo with both the screenplay and story by credits both on packaging and the film itself.

The original negative was processed at a local film lab in Rome and was unfortunately badly scratched and damaged. The film had to be pieced back together, but the splices were so weak due to the damage that extensive amounts of tape had to be used to allow the negative to make it through a printing machine. Because of the fragile state of the negative, a Dupe Negative was made and then blown up a few thousandths of an inch to cover all the splice tape that held the original negative together.

In anticipation of this new Blu-ray release, the film was digitally restored using the Dupe Negative and a Fine Grain element to capture the best possible image. Every frame was reviewed, and the film received extensive clean up to remove thousands of scratches, bits of dirt, and other damage. Because audio elements to properly up-mix to 5.1 do not exist, the original mono track was remastered, and minor anomalies were corrected. The result is a film returned to its original vibrancy and beauty that remains true to director William Wyler’s vision.

The limited-edition Paramount Presents Blu-ray Disc™ is presented in collectible packaging that includes a foldout image of the film’s theatrical re-release poster, and an interior spread with key movie moments. Newly remastered from a 4K film transfer, the ROMAN HOLIDAY Blu-ray also includes a new Filmmaker Focus with film historian Leonard Maltin, access to a Digital copy of the film, as well as previously released featurettes on Academy Award®-winner Audrey Hepburn, Edith Head’s Oscar®-winning* costumes, the blacklisting of screenwriter Dalton Trumbo, and much more.

“ACADEMY AWARD” and “OSCAR” are the registered trademarks and service marks of the Academy of Motion Picture Arts and Sciences.
Click to expand...

I’ll buy the iTunes version and wait for the free 4k upgrade.

Paramount is making mistakes with this line of presents films but not offering 4K UHd blu rays.
Reactions: Britton 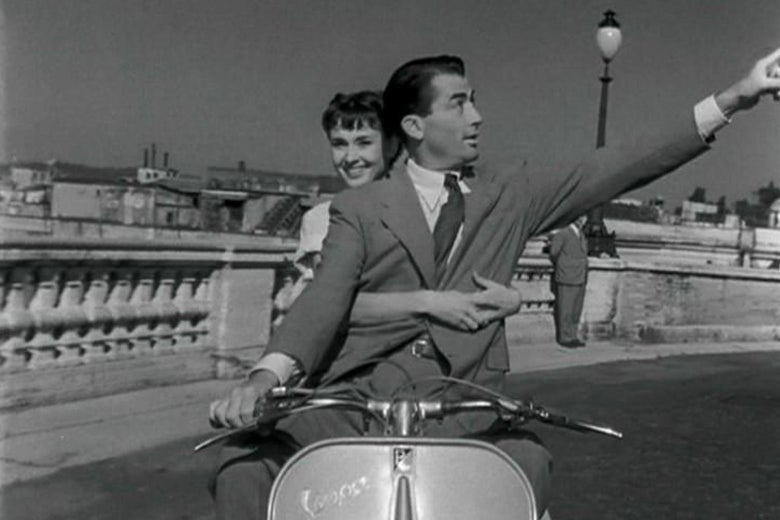 In this merry romantic comedy, Audrey Hepburn and Gregory Peck show that she and he who have the best hijinks together are the ones that belong together.

In this merry romantic comedy, Audrey Hepburn and Gregory Peck show that she and he who have the best hijinks together are the ones that belong together.

Sam, thanks for the heads-up. The page wants me to sign up for a free trial account. While it's free, I don't want to risk the spam mail I'll be getting post-sign-up.
Reactions: Jack K, Sam Posten and Johnny Angell

The price of this on Amazon just dropped to 17.99 after lingering at 22.99 since its first appearance. Follow the link, the module may still show the previous price of $22.99.

If you're interested, I wrote something about how I became an Audrey Hepburn fan after watching Roman Holiday. If you heard the HTF podcast about desert island discs, this would be a more thorough explanation.

Reflections on a posthumous discovery of the actress in her first starring role When Audrey Hepburn passed away on January 20, 1993, I was 19 and a sophomore in college. In that nascent Internet er…

Cameron, that was an excellent read. I can understand being teased about your idols at a young age. I went through the same thing. Having a love for film and its stars is a very uncommon trait when everyone else is constantly gabbing about sports and its players. Film was always my obsession. I never gave a second thought to sports. For that, I was socially distanced from the jocks. No loss.

Thanks for taking the time to write your reflections on Audrey Hepburn. ROMAN HOLIDAY was a real eye-opener and gave me newly found love and respect for Audrey.

Thanks also for the mention
Reactions: Osato, B-ROLL and usrunnr

Thank and you're welcome, Ron!

Some of the teasing from my friends was because I was rather religious at the time, so the notion of having an "idol" was a bit frowned upon.

I understand having no affinity for team sports during my teen years. I've developed more of an interest as I've gotten older (doesn't hurt to have one of the best college women's basketball teams in the country in my town), but still tend to favor the teams and sports that don't get a huge amount of attention (my own tendency to root for underdogs). My former supervisor is also a high school basketball coach in her spare time, so I have a lot of respect for the work she's doing with those young women, and she's been kind of an example of someone who loves sports, but doesn't really expect other people to.
Reactions: Osato

This video came up in my YouTube suggestions, and I found it quite interesting for putting the 1954 Oscars race for Best Actress into a bit of context. It seems to suggest if Deborah Kerr's role in From Here to Eternity had been more substantial, she would have been more of a contender against Hepburn. Indeed, I was rather impressed by the names in the running, with Kerr and that film standing out most.