It’s hard to believe it’s been 25 years since Mystery Science Theater 3000 first hit the airwaves. Shout! Factory is celebrating with a big 25th anniversary set, which includes four new-to-DVD episodes, along with two back-to-back episodes that have been long out of print, plus a 3-part retrospective documentary and additional bonus materials, all housed in a limited-edition collector’s tin. 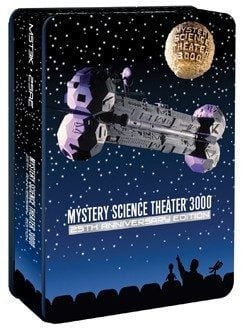 As I’ve stated in my previous reviews of these sets, judging the video quality of an episode of MST3K is difficult. The movies are usually in fairly bad shape, with sub-par transfers that the series’ producers had to contend with.The only fair thing to do is to judge the host segments, and the quality improves as you get later into the series. Disc one has some minor softness to it, but colors are consistent. The remaining discs are excellent, with increased detail and well-defined colors. Throughout all five discs, however, there are some brief minor anomalies inherent in the broadcast masters, such as dropouts, but these are few and far between.

As with Shout! Factory’s other MST3K boxed sets, the menu designs on each disc are themed with the episode, with decent CG animation, and are very funny. Also included in the set are a set of original comic book style mini-posters for each episode, identical to the DVD covers, created by Steve Vance. All five discs come housed in four THIN-Pak keepcases (Gorgo shares a keepcase with the two bonus episodes) within a nicely designed tin case.Disc One (Moon Zero Two):Introduction by Hammer Films Historian Constantine Nasr (9:37): Nasr discusses the history behind the film.Return to Eden Prairie, Part I: The Crew (12:21): The first of a three-part documentary retrospective on the series, produced by Ballyhoo Motion Pictures.Theatrical Trailer (2:25)Disc Two (The Day The Earth Froze):Return to Eden Prairie, Part II: The Locations (30:02): The second of a three-part documentary retrospective on the series, produced by Ballyhoo Motion Pictures.MST Hour Wraps (5:13): Mystery Science Theater Hour was a short-lived hour-long version of the series for syndication (splitting each original episode in half), with Mike Nelson, in his Jack Perkins character, bracketing each episode.Theatrical Trailer (2:32)Disc Three (The Leech Woman):Return to Eden Prairie, Part III: The Characters (31:28): The third of a three-part documentary retrospective on the series, produced by Ballyhoo Motion Pictures.Life After MST3K: Mary Jo Pehl (7:44): Mary Jo Pehl discusses her career on the series and what she’s been up to since the show went off the air.Theatrical Trailer (1:51)Disc Four (Gorgo):Ninth Wonder of the World: The Making of Gorgo (MST3K Edition) (31:11) This is a very interesting look at the background behind the movie and how it got made. Not sure if this is an edited version or not (hence the MST3K Edition subtitle).Leonard Maltin Explains Something (0:35): Maltin pokes some fun at his intro segment from the episode, and wishes MST3K a happy 25th.Theatrical Trailer (2:31)Disc Five (Mitchell / The Brain That Wouldn’t Die):Last Flight of Joel Robinson (10:37): Joel Hodgson discusses his final episode as host of MST3K.Interview With Actress Marilyn (Hanold) Neilson (4:16): The actress, who appears very briefly in The Brain That Wouldn’t Die, discuses her career.

Shout! Factory celebrates the 25th anniversary of MST3K in style with a decent set of episodes, throws in two bonus episodes along with two documentaries, interviews, and trailers in a decorative tin case. Fans will likely eat this up.