After the success of Steven Spielberg’s Jaws, Universal wanted another summer blockbuster in the same vein, this time a shark on land. The result is the often silly (and derivative of another Universal/Spielberg classic) thriller, The Car, wherein a driverless sedan comes out of nowhere to terrorize a small desert town. 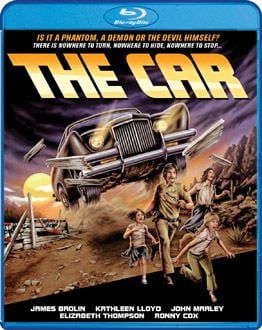 A young couple are enjoying a bicycle ride through the high desert until they come face to face with a sedan, blaring its horn and eventually running them off the road and into the ravine below. Later that day, a young hitchhiker (John Rubinstein) is almost run off the road by a horn-blaring black sedan. After taunting the car, he is run over and killed. The Sheriff (John Marley) and his deputies Wade (James Brolin) and Luke (Ronny Cox) begin investigating, only to find that they have a killer car on their hands, ordering roadblocks at all roads leading out of town. When the car guns down the Sheriff, Deputy Wade assumes command, working with the other deputies and the town bully to devise a plan to stop the car in its tracks.

Combining elements from two of Steven Spielberg’s early Universal films (Duel and Jaws), The Car is a movie that is better than it deserves to be, with solid performances by its leads, including James Brolin, Kathleen Lloyd (as Brolin’s love interest), John Marley, and Ronny Cox as the deputy struggling with alcoholism. The film never explains how the car became possessed or why it is on a killing spree, but this is one of those movies where it is best to check your brain at the front door and just sit back and enjoy the ride.

The 1080p transfer used on this Shout! Factory release is stellar, with well-defined and consistent colors, excellent detail (you can see the textures in the fine desert sand), and contrast is also excellent with minimal crushing in the blacks and whites that don’t clip. Grain is evident and faithfully represented, never appearing as a distraction.

As with most Shout! Factory releases, the disc offers both a 5.1 and 2.0 stereo mix in DTS-HD Master Audio. The 5.1 mix offers a wider soundstage, a more discrete surround presence, and a stronger LFE channel, particularly when the car is revving its engine or the low bass notes of Leonard Rosenman’s score.

Mystery of The Car with Elliot Silverstein (1080p; 9:16): The director discusses the production of the film and is quite honest that The Car is not a great movie.

The Navajo Connection with Geraldine Keams (1080p; 12:10): The actress who played one of the deputies discusses her involvement with the film and her background.

Just Like Riding a Bike with Melody Thomas Scott (1080p; 11:52): The actress who plays one of the bicycle victims discusses her career, working in the desert on The Car, and one of the pranks she pulled on a group of tourists while shooting on location.

Still Gallery (1080p; 10:32): A collection of promotional stills, lobby cards, posters, and even an ad for a children’s game based on the movie.

The Car is a fun, yet derivative and often silly thriller that looks great on Blu-ray thanks to Shout! Factory. The extras are a bit weak here, with only interviews with the director and two very minor characters, but still makes a nice package for fans of the film.

Ditto! I've always had a soft spot for this movie. It never quite delivers as much as you want it too but there's something about it that always brings me back to it.


TravisR said:
I'm a big fan of this movie. Partly because it's a cool little movie and partly because of nostalgia.
Click to expand...

I have never seen this in 2.35. Looking forward to it!

KPmusmag said:
I have never seen this in 2.35. Looking forward to it!
Click to expand...

Thanks to all the great looking desert locations and widescreen photography, the movie looks really good.

Makes a perfect double feature with:

My review of the unnecessary and needless sequel, The Car: Road to Revenge is now available.

I loved The Car as a kid. Creeped me out back then.

Todd Erwin said:
My review of the unnecessary and needless sequel, The Car: Road to Revenge is now available.
Click to expand...

I never heard of the sequel and glad I haven’t. Now I’ll forget I read this.

I enjoy it as a nice slice of '70s cheese. Why anyone felt it needed a sequel 42 years later is a mystery.
You must log in or register to reply here.