Master Japanese director Masaki Kobayashi was as much a social and political critic as he was a celebrated filmmaker. He used every opportunity in his work to make comments on the necessity of political and social reform in Japan, sometimes to the detriment of his career and the fortunes of his studio (who, for example, waited three years to release the scathing indictment offered in the first film in this set). Removed from their political venting, however, the films in Masaki Kobayashi Against the System remain imminently watchable and relatable, proof positive that a master was at work. 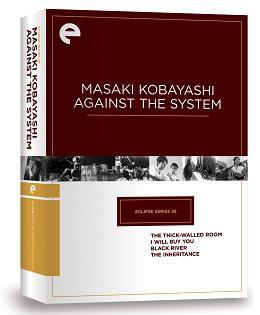 four slimline cases in a slipcover

The Thick-Walled Room – 3/5The Dolby Digital 1.0 sound mix features soft hiss throughout and some distorted crackle on occasion. There is more bass here than one might expect in the mix, but otherwise the sound is very flat owing to the post-synching of dialogue that was done for the film.I Will Buy You, Black River – 3.5/5The sound mix for each film is once again Dolby Digital 1.0. There is hiss present throughout I Will Buy You but is less present (though still there particularly in the film’s second half) of Black River. But the transfers have decent fidelity even with the post-synched sound.The Inheritance – 3.5/5The Dolby Digital 1.0 sound mix is a mixture of post-synched and live recording, and the contrast is very noticeable between the two. There is hiss present fairly regularly, and there is also some flutter and some muffled crackle to distract on occasion. Otherwise, the fidelity is decent for a film of this period.

There are no bonus features on Criterion’s Eclipse releases, but each of the four enclosed slimline cases contain interesting liner notes by film historian Michael Koresky.

The four films which make up Masaki Kobayashi Against the System are all entertaining films apart from their social criticisms and sometimes heavy-handed satirical swipes at social and governmental norms. Fans of the director or of this period of Japanese cinema will welcome this new set with open arms with two films (The Inheritance and I Will Buy You) especially noteworthy.