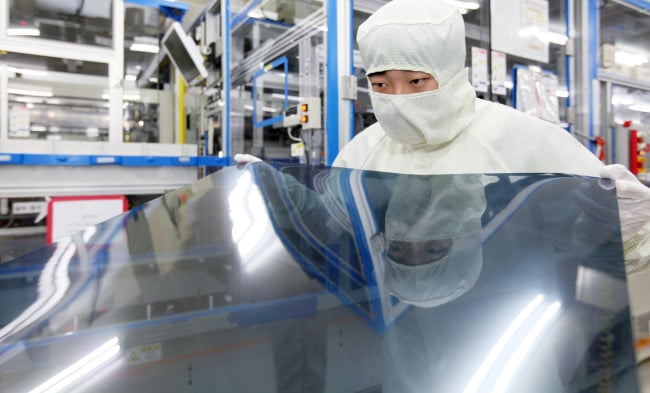 LG, which has poured more resources into the still-nascent but more lucrative organic light-emitting diode TV, now has come up with its own upgraded version of the LCD, the Nano Cell.

LG said its Nano Cell uses 1-nanometer uniform particles to create more subtle, accurate colors that retain their integrity from wider viewing angles -- up to 60 degrees -- than other LCD TVs, including Samsung’s Quantum Dot that uses 2- to 11-nanometer particles.

“Due to the cost effectiveness compared to Quantum Dot films, orders are already soaring especially from Chinese TV makers such as Skyworks and Kongga,” the researcher added.

LG plans to launch some 30 new TV models this year, with those featuring Nano Cell making up almost half.

Despite the overall benefits, LG would not say Nano Cell is an alternative to OLED.

“Still, OLED is the most premium model for LG TVs. OLED’s color contrast is of different level from LCD,” said Lee Hee-young, the team leader at product planning.

LG appears to be avoiding having its OLED TVs rival Samsung’s Quantum Dot by positioning the latest Nano Cell in between models.

Currently, the OLED is considered the most advanced display technology despite Samsung’s claims that its LCD-based Quantum Dot competes head-on with the OLED. Samsung suspended OLED TV production in 2013 due to high costs and low yields.

With the two-track strategy, LG has been aiming to expand its presence in the premium TV market. Last year, the company topped $2,500-plus TV sales thanks to high-priced OLED models.

Prices doubled from last year? Demand must be skyrocketing especially in China.

Very nice article, hitting all of the important points clearly.

Looking forward to reading professional reviews on LG and Samsung's 2017 Nano cell TVs and to see them butt-to-butt at our 2017 TV Shootout with Joel Silver and Kevin Miller calibrating and presenting the picture quality attributes with test patterns and content.

If they want to sell tvs, how about having 3D as an option?

Not sure that's feasible, but I and many other would like that.

Sony's XBR-74Z9D is the only TV this year that is 3D capable.

Wouldn't they be better to try and reduce the price of OLED so that LCD could be consigned to history like the CRT.

Keith Cobby said:
Wouldn't they be better to try and reduce the price of OLED so that LCD could be consigned to history like the CRT.
Click to expand...

It's not that simple. There are literally very few OLED manufacturing machines in the world. And you can't just pop out new ones on spec. These are multi deca-billion dollar investments.