The third year of HBO’s ridiculously popular fantasy series was its best yet, addressing the main problem area of the first two seasons and properly setting the stage for a phenomenal fourth. 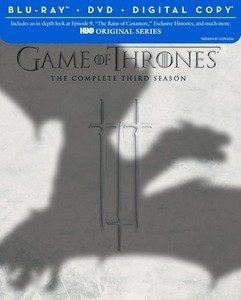 Presented in its original broadcast aspect ratio of 1.78:1, the 1080p, AVC-encoded transfer doesn’t look much different from past releases with its inky blacks and uncompromised contrast. Some forest scenes can seem a bit drab in comparison to the other locations, especially the high contrast environment of the Wildlings, but there’s no doubt that’s by design. Color is incredibly rich, most notably in the sunny settings of the eastern territories and King’s Landing, where the pastel hues of the Tyrell wardrobe come through beautifully. Detail is likewise impeccable, though there are some hints of noise in more challenging images like the tightly concentrated, high contrast patterns in the North. Still, the picture is often quite breathtaking and no doubt superior to either broadcast or streaming presentations.

Dialogue in the English language 5.1 DTS-HD Master Audio track is consistently crisp, detailed, and intelligible. Surround effects can be fairly aggressive, and the various pans and environmental effects are consistently balanced and seamless. By comparison, LFE does not have as much of a presence, except for a few choice battle sequences, but the track has a consistent, pleasing depth and fullness throughout.

The highlights of the bonus material are the In-Episode Guide interactive feature and the "Rains of Castamere" picture-in-picture commentary. The rest of the items – including 12 audio commentaries, behind-the-scenes featurettes, and alternate viewing formats – complete another impressive collection of extras.Previews and Recaps: Episodes include the "previously" and "next" on promos that originally aired with them.In-Episode Guide: The exhaustive compendium provides descriptions of the show’s characters, locations, and history in context with events of each episode. Most of the information is in text form, but the histories come in video form and are unlocked as one progresses through the episodes (hint: if you don’t want to bother with the unlocking part, all the videos can be accessed on Disc 5)Audio Commentaries[DISC ONE]A Gathering Storm (14:00, HD): The cast and crew recap the previous season.New Characters (9:41, HD): Newcomers to the series talk about their characters, such as Olena Tyrell (Diana Rigg), Missandei (Nathalie Emmanuel), and Mance Rayder (Ciaran Hinds).[DISC FOUR]The Rains of Castamere (46:36, HD): A picture-in-picture commentary feature for the pivotal ninth episode includes interviews with the cast and crew, character and story analysis, and behind-the-scenes video from production.[DISC FIVE]The Roots of Westeros: The exhaustive interactive guide provides information (mostly textual) on each of Westeros' major regions, including the North, the Westerlands, the Riverlands, the Stormlands, the Vale, the Reach, the Wall and Beyond, and Across the Narrow Sea. Each region is further subdivided into geographical locations, the noble houses, and major events in their history. Considering there are entire wikis dedicated to the Game of Thrones mythology, the feature doesn't offer anything new, but the amount of information is impressive nonetheless.Histories and Lore: Animated illustrations with character voice overs recount tales from key events in Westeros history. The items are also incorporated in the In-Episode Guide, but obviously they’re more easily accessible here.Inside the Wildlings (6:21, HD): Takes a look at the legendary people living north of the Wall.The Politics of Marriage (8:38, HD): Examines the season's various unions made for political gain, from Joffrey and Margaery to Tyrion and Sansa, as well as the fallout from breaking one’s vow.Deleted/Extended Scenes (14:28, HD)Printed Episode Guide: Summaries of the season’s 10 episodes includes an illustration of the Red Keep on the reverse side.DVDs: The season’s 10 episodes are spread across two double-sided DVDs.Digital Copy: Available via iTunes or Ultraviolet, the offer expires on February 29, 2016.

The strongest season of Game of Thrones yet gets more of the same stellar HBO Blu-ray treatment, from presentation to supplements. Followers of the show should have no qualms rounding out their collection with this latest release.

Completely agree with your review Cameron! The more I see GoT unfold onscreen, the more I'm convinced that the comment I made many years ago (probably on an older version of HTF) would have worked: that they filmed The Lord of the Rings as an episodic television series as opposed to the three movie format. At it's heart, LoTR is a character driven story, not an action story. If you read LoTR, Tolkien describes action/war scenes in very brief passages, having been through both world wars he was not to glorify battle, and spends the majority of the time building story arc and character relationship. This would have been well served with smaller,shorter action set pieces, and more focus on the characters, like GoT is doing. If in the future anyone ever decides to take another stab at LoTR (and the Hobbit) I think that the GoT format is the way to go.

I love The Lord of the Rings novel way more than I do A Song of Ice and Fire, but I am way more engrossed by the HBO series than I ever was by PJ's trilogy, and it's because I care about the characters in GoT due to how much time the show spends getting you invested in the characters as opposed to just staging epic battles. And they actually cast Brits in the leads (sorry Elijah Wood and Sean Astin, your accents did not cut it, they may as well have pulled a "Kevin Costner" from Robin Hood), what a novel concept!

The only bummer for me for GoT is that I don't get HBO so I have to wait a year between getting BD season sets after everyone else has already seen the show.

Looking forward to seeing this. It's on Sky Atlantic in the UK & I don't get that, so I'll have to wait a year for season four as well... & stay away from spoilers (which means staying away from G.O.T. threads). I'm going to re-view seasons 1 & 2 before starting on three. I've just finished season one (& I can easily re-watch these every year) it just gets better with every viewing.

The only bummer for me for GoT is that I don't get HBO so I have to wait a year between getting BD season sets after everyone else has already seen the show.
Click to expand...

So. . .what was the "main problem area of the first two seasons?"

Daenerys' story, which tended to languish in past seasons...
Click to expand...

Although I understand that's by design or the nature of things. I knew things would have to build to what we get with season three, but I always found it a bit of a slog following her around the desert.

I had a slight problem with series two, in that it kept jumping around from story to story every few minutes. I suppose when there's a lot going on it really can't be helped, that's why the siege episode was so good, as it didn't jump anywhere else. I'll probably start re-watching season two next week, but no rush, it'll probably be summer before I finish three.

I don't know what's wrong with you guys. I can watch Daenarys watching paint dry. As long as it's in the "right attire".

She hasn't worn that outfit in a long time.But if following Daenerys means seeing more of Missandei, then I won't complain.
You must log in or register to reply here.