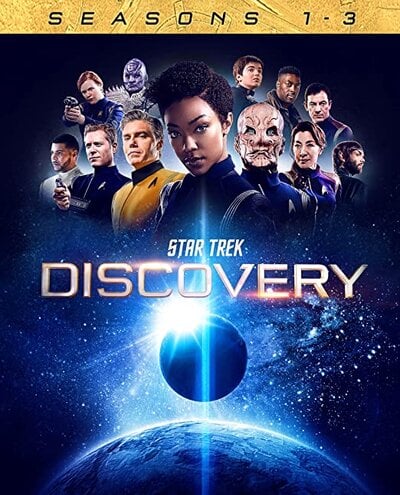 Marking the return of one of the most iconic and influential global television franchises in history, STAR TREK: DISCOVERYTM: SEASON ONE follows the voyages of Starfleet on their missions to discover new worlds and new life forms, and one Starfleet officer who must learn that to truly understand all things alien, you must first understand yourself. The series features a new ship and new characters, while embracing the same ideology and hope for the future that inspired a generation of dreamers and doers.

After answering a distress signal from the U.S.S. Enterprise, STAR TREKTM: DISCOVERY: SEASON TWO finds the crew of the U.S.S. Discovery joining forces with Captain Christopher Pike (Anson Mount) on a new mission to investigate seven mysterious red signals and the appearance of an unknown being called the Red Angel. While the crew must work together to unravel their meaning and origin, First Officer Michael Burnham (Sonequa Martin-Green) is forced to face her past with the return of her estranged brother, Spock (Ethan Peck). STAR TREKTM: DISCOVERY: SEASON THREE finds the crew of the U.S.S. Discovery landing in an unknown future far from the home they once knew. Now living in a time filled with uncertainty, the U.S.S. Discovery crew, along with the help of some new friends, must work together to restore hope to the Federation.

○ DISCOVERING DISCOVERY: THE CONCEPTS AND CASTING OF STAR TREK: DISCOVERY – Interviews with producers, writers and stars of Star Trek: Discovery about casting of the debut season.
○ STANDING IN THE SHADOW OF GIANTS: CREATING THE SOUND OF DISCOVERY – A discussion with Executive Producer Alex Kurtzman and Composer Jeff Russo about creating the Discovery theme and score for the show.
○ CREATURE COMFORTS – A behind-the-scenes look at the makeup and prosthetics department on Star Trek: Discovery, as they both modernize well-known Star Trek species like the Klingons, Vulcans and the Andorians, and bring to life a new species, the Kelpiens.
○ DESIGNING DISCOVERY – Insight into the production design department led by Tamara Deverell as they create the planets, the world within those worlds and the starships to travel amongst them.
○ CREATING SPACE – An exploration of how the VFX team, headed by Jason Zimmerman, pushes the envelope to create the reality of space, planets, and starships for Star Trek: Discovery.
○ PROP ME UP – Led by Propmaster Mario Moreira, a voyage through the world of Discovery props, providing an inside look at the design process from inception to set.
○ FEEDING FRENZY – Exclusive to the Blu-ray and DVD collections, a fascinating look at the on-set food stylist who creates a galaxy of cuisine.
○ A WOMAN’S JOURNEY – With strong female producers and writers off-screen and powerful female characters on-screen, Discovery exemplifies the groundbreaking inclusionary theme first put forth in the original series.
○ DRESS FOR SUCCESS – Costume Designer Gersha Phillips and her team create a spectacular array of clothing, uniforms and armor for every kind of species in the galaxy.
○ STAR TREK DISCOVERY: THE VOYAGE OF SEASON ONE – A look at the adventures and plot twists encountered in the first season by the crew of the Discovery.
○ DELETED / EXTENDED SCENES

○ ENTER THE ENTERPRISE – Captain Pike shepherds U.S.S. Discovery through Season Two, but must return to his original command on the U.S.S. Enterprise. The production designer, builders, actors and producers discuss the daunting task of reviving the iconic ship’s bridge.
○ PUTTING IT TOGETHER – Follow the real life Discovery crew through preparation, shooting and posting the amazing Season Two finale. A true in-depth look at the many talents that come together to bring Discovery to life.
○ THE RED ANGEL – A major plot point of the season is the Red Angel. Go behind-the- scenes with producers, directors and Sonequa Martin-Green, along with the craftspeople that created it and made it come to life.
○ DESIGNING DISCOVERY: SEASON TWO – On a show where no location exists in our world, the production and lighting design teams must create every space. Look at the locations and spaces created for Season Two.
○ PROP ME UP: SEASON TWO – Propmaster Mario Moreira takes fans through the world of Discovery props.
○ DRESS FOR SUCCESS: SEASON TWO – Each species has its own fashion style dictated by both culture and physical attributes. Gersha Phillips and her team discuss how costumes inform a character and how they create a spectacular array of clothing, uniforms and armor for every kind of species.
○ CREATURE COMFORTS: SEASON TWO – Producers, craftsmen and actors discuss the design process, the implementation and the performance required to bring characters to life. Fans can also catch a one-on-one discussion with makeup artist James McKinnon and L’Rell actress, Mary Chieffo.
○ CREATING SPACE – There are some shots that simply can’t be done practically when you are set in space. The VFX team, headed by Jason Zimmerman, pushes the envelope every week to create amazing computer graphics to give fans a realistic feel of space.
○ STAR TREK DISCOVERY: THE VOYAGE OF SEASON TWO – A look at the adventures and plot twists encountered in Season 2 by the crew of the Discovery.
○ AUDIO COMMENTARIES (Select Episodes)
○ DELETED / EXTENDED SCENES
○ GAG REEL

○ STAR TREK DISCOVERY: THE VOYAGE OF SEASON 3 – Jump to the future
with the crew of the Discovery as they discuss the new adventures with writers and producers, and dive into how their visions were realized by the cast, sets, costumes and props.
○ STUNTED – Featuring interviews with cast and stunt coordinator Christopher McGuire, fans get a behind-the-scenes look at the creation of the stunts from rehearsal to the expertise required to make them safe, believable and executed to perfection.
○ BEING MICHAEL BURNHAM – Sonequa Martin-Green takes fans on her season-long journey as Michael Burnham with her personal record of the season and this beloved character.
○ KENNETH MITCHELL: TO BOLDLY GO – Featuring cast and crew interviews, this emotional and intimate look touches on Kenneth Mitchell’s life with ALS. Discussed on camera for the first time, the featurette highlights how Kenneth's wheelchair was included for his on-screen character, his own take on the various roles he played in Discovery and what those roles mean to the show.
○ BRIDGE BUILDING – Fans have been intrigued by Starship Discovery’s Bridge Crew for three seasons. Now, they can immerse themselves in all things crew-related in this behind-the-scenes look showcasing the characters and actors who bring them to life each week.
○ WRITER’S LOG: MICHELLE PARADISE – Showrunner Michelle Paradise provides a personal log about shooting the beginning of season three in Iceland.
○ DELETED SCENES
○ GAG REEL

Seasons one, two and three of STAR TREK: DISCOVERYTM are currently available on Blu-ray and DVD, and available to stream now on Paramount+. The series is distributed concurrently by ViacomCBS Global Distribution Group on Netflix in 188 countries and in Canada on Bell Media’s CTV Sci-Fi Channel and OTT service Crave, and produced by CBS Studios in association with Secret Hideout and Roddenberry Entertainment.


Thank you for supporting HTF when you preorder using the link below. If you are using an adblocker you will not see link. As an Amazon Associate HTF earns from qualifying purchases
​
Last edited: Aug 16, 2021

Whoever wrote that Decider quote needs to be shot out of a canon.

Looks like a decent pick up for anyone who doesn't have the seasons yet, but come on...was anyone actually asking for this release?

Lord Dalek said:
Whoever wrote that Decider quote needs to be shot out of a canon.
Click to expand...

Intentional? If so, I nominate it for best true pun of the year.

Since all of the new Treks have been airing on cable and streaming via Crave in Canada, I haven't felt compelled to buy the Blu-rays (I still need to pick up TAS and TNG S6 on Blu), but the new set is tempting!

I’m happy CBS Paramount are still making these releases available and with options.

I’d really like to see The Mandalorian but Disney still just wants us to sign up to see it. I’m glad CBS Paramount is making the shows available after its initial streaming on disc. They get my money from both revenue streams!

Jason_V said:
Looks like a decent pick up for anyone who doesn't have the seasons yet, but come on...was anyone actually asking for this release?
Click to expand...

If for no other reason, it is another easy way to clear out old inventory collecting dust in their warehouses.

I might haven considered buying them if they'd restored the as-broadcast 'burnt-in' subtitles (especially since the burnt-in ones were more than just plain text). The player-generated subtitle switcheroo (which is all too common these days) was a deal-breaker for me, and I'm sure this is just a straight re-package.

So a Single package at $132 (probably discounted to $92) is still more expensive.
Click to expand...

I just found and ordered this two-pack deal earlier today after being informed I had won a copy of Season 3 from a Paramount sponsored contest! So I am lucky enough to have $44 + $0 = total $44 for all three seasons. Bought not have otherwise bought 1-2, but I am a bit OCD and couldn't bear the thought of having only S3.
You must log in or register to reply here.