The third year of CBS’s high tech conspiracy thriller proved to be the series’ most ambitious, expanding its espionage and domestic terrorism story to new levels without shortchanging viewers on compelling character development. 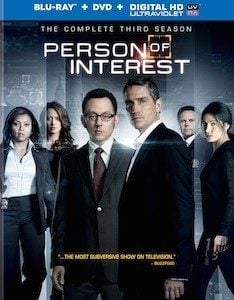 *** WARNING: The following contains spoilers. Read at your own risk. ***After the surveillance A.I. known as the Machine managed to thwart entities in the U.S. Government from gaining full access to its system, everything has seemingly gone back to status quo. The Machine still sends Finch (Michael Emerson) and his operatives Reese (Jim Caviezel) and Shaw (Sarah Shahi) “irrelevant” numbers, victim or perpetrators of violent crimes, while still feeding national security agencies “relevant” digits, those it deems a threat to the country’s welfare.But even if the Machine hasn’t deviated from its core programming, it doesn’t mean it’s not partaking in some decidedly extracurricular, even evolutionary, activities. Most notable is its continued interaction and communication with the hacker-anarchist-turned-Machine-acolyte Root (Amy Acker), who’s confined for the time being in a psychiatric facility (courtesy of Finch), but who knows her liberation and reinstatement as the Machine’s “analog interface” is an inevitability.Meanwhile, a pattern emerges pointing to the convergence of both relevant and irrelevant numbers, as aggressive privacy activists calling themselves Vigilance, led by the uncompromising Peter Collier (Leslie Odom, Jr.), begin to turn up with increasing regularity in Finch and his team’s cases. Likewise, former police detective Joss Carter (Taraji P. Henson), now pounding the pavement as a patrol officer, will find her pursuit of the corrupt cop organization HR leads her into the same clandestine spheres of influence.The government entities represented by Control (Camryn Manheim) also remain undeterred. Having lost the battle for the Machine, they look to acquire another A.I. comparable to Finch’s creation, but with none of the checks and balances that denied them total access. It’s no coincidence Decima Technologies, the mysterious corporation behind more than a few past and present interactions with Finch and his colleagues, appears in response to those interests, offering everything Control wants and everything Finch fears. As the rise of a competing, all-seeing surveillance system becomes an increasing reality, the paths of the major players will converge to an unpredictable, but undoubtedly unsettling, conclusion.In its most compelling, if not ambitious, season so far, Person of Interest tells the requisite number of case-of-the-week episodes, but ultimately gives priority to its grand series arc exploring too-relevant topics of personal privacy, civil liberties, and the shades of grey existing in a post-9/11 environment. The season also raises the stakes by killing off a beloved character, a move that’s maybe not so unusual in light of what Game of Thrones does on a regular basis, but that ultimately strikes at a much deeper level because of both the quality of the character and the player filling the role.Compared to past seasons, there are fewer character back stories, but they remain a highlight as the pasts of Shaw, the activist Peter Collier and Harold’s relationship with his fiancée Grace (Carrie Preston) are doled out in concise but satisfying quantities. The performances also remain excellent across the board, so much so that it’s genuinely difficult to identify a “favorite” among the cast, though the female characters of both Root and Shaw seem inherently written to steal the show with every scene they’re in.As with the previous season, the final run of episodes in the third season holds nothing back in terms of complexity of story and concepts and seems to introduce a significant game changer to how things operate from here on out. I said something similar with the end of the second season, but in hindsight, what seemed like a reset was more akin to a software update. With the upcoming season, “reboot” seems much more apt a description. How far reaching it will be remains to be seen, but given the show’s track record it’s doubtful anyone can reliably predict what the writers have in store for the coming year.Person of Interest: The Complete Third Season includes the 23 episodes that originally aired on CBS in 2013 and 2014. The episodes are spread across four Blu-ray discs in the following arrangement:Person of Interest’s fourth season premieres on Tuesday, September 23rd at 10/9c on CBS.

The series episodes are correctly framed at 1.78:1 and presented in 1080p with the AVC codec. Though there are as many as six episodes on each disc, there shouldn’t be concerns about over-compression due to the title’s limited supplements. The visuals bear this out, as the transfer exhibits inky black levels, strong contrast, and deep color; however, because of the cinematography and color grading, shadow areas can often look a bit crushed. Fine object detail in fabrics, and skin textures in particular, are excellent, though scenes in higher contrast environments reveal some slight edge haloing. Grain structure is often visible, as is a touch of noise at times, though the sometimes grittier flavor lends itself well to the sometimes bleak content.

There’s a slight expansion of the extras compared to previous releases, but the collection of extras remains on the measured side.Season Finale Audio Commentary with Michael EmersonPerson of Interest: The Future of A.I. (26:02, HD): Writers and producers discuss the current state of artificial intelligence technology and its intersection with developments in the show.Saying Goodbye to a Friend (6:17, HD): The cast and crew talk about the loss of a major character from the show, with on-set footage from shooting the critical scene.Gag Reel (3:04, HD)Bear on Set (2:10, HD): A look at the canine actor Boker, who plays the trusty Bear.2013 Comic Con Panel Q&A with Cast and Creators (25:01, HD): The panel includes Jonathan Nolan, Greg Plageman, Jim Caviezel, Michael Emerson, Kevin Chapman, Sarah Shahi, and Amy Acker.Digital Comic One Shots: Each episode includes a one-page comic book rendering of a critical scene.DVD Edition: The episodes presented in standard definition are spread across six dual-layer DVDs.UltraViolet Digital Copy: Redeem by September 2, 2017.

Warner Home Video turns in another great looking transfer for the third season of CBS’s science fiction / conspiracy thriller Person of Interest. The bonus material remains a bit limited, but fans of the show will likely be spending most of their time on repeat viewings of the episodes themselves.

I have this coming to me. I can't wait until September 23rd, when the fourth season starts with two new female characters. One is bad and a killer, the other a good guy as a police captain.

This is definitely the show at the top of my must-watch list.
You must log in or register to reply here.