HBO has gone back and remixed its most popular dramatic series of all time in Dolby Atmos, the first television series to do so. That is the only major difference between this limited edition set of the first season (packaged in a nice steelbook case and a sigil magnet) and the original release, as the contents of each of the five discs (episodes, bonus materials, and even the main menu design) are identical. This review contains excerpts from Cameron Yee’s review of the Complete First Season DVD set. 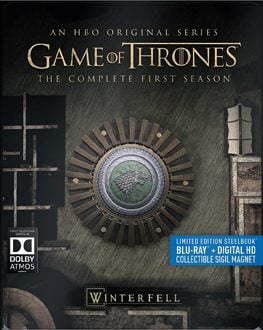 For decades, Lord Eddard “Ned” Stark (Sean Bean) has ruled over the northern region of Westeros in service to his king, Robert Baratheon (Mark Addy). When the King’s Hand, Baratheon’s closest advisor and the Seven Kingdoms’ practical governor, suddenly falls ill and dies, Stark is asked to take his place. While no doubt a position of high honor, Stark and his family have heretofore been left alone in the harsh wilderness of the North, giving them a measure of freedom, if not autonomy. Moving to the capital in the South puts Stark in the heart of the kingdom’s political scheming, intrigue and backstabbing, as well as under the contemptuous eye of Baratheon’s wife, Queen Cersei (Lena Headey), and her twin brother, Jaime Lannister (Nikolaj Coster-Waldau). The proposed marriage of Stark’s impressionable daughter Sansa (Sophie Turner) to Baratheon’s psychotic son Joffrey (Jack Gleeson) promises to further bind the families together, a prospect Stark looks at with diminishing enthusiasm the longer he stays on.

Back in the North, Stark’s wife, Catelyn (Michelle Fairley) and eldest son Robb (Richard Madden) carry on the governance of Winterfell and its lands, and strive against another member of the Lannister family, the dwarf Tyrion (Peter Dinklage), brother to the Queen. Though the man known as “The Imp” has shown a notable kindness to one of the Stark children after a life-threatening incident, the Lady believes Tyrion responsible for the injury, and intends to have justice. Meanwhile, Stark’s bastard son Jon (Kit Harington) has joined up with the Night’s Watch, a special army tasked to defend the northernmost region from encroachment by less civilized “wildlings.” The barbaric people live outside of a massive retaining wall built of ice and rock, but reports of other beings thought long extinct have Northerners trembling from more than just the cold.

In warmer climes, across the narrow sea in Erros, the son of the deposed king Aerys Targaryen schemes to take back the throne of the Seven Kingdoms. Arranging the marriage between his sister, Daenerys (Emilia Clarke) and Khal Drogo (Jason Momoa), leader of a fierce warrior tribe named the Dothraki, Viserys Targaryen (Harry Lloyd) envisions marching into the Seven Kingdoms’ capital with a Dothraki army at his command. But his once subservient sister turns out to be no mere bride to the Khal, instead embracing her new life and becoming a full blown khaleesi, or queen, to her people. The Targaryens may indeed take back rule of the Seven Kingdoms, but not in the way Viserys – nor the people of Westeros – ever imagined.

Based on the first novel in George R.R. Martin’s A Song of Ice and Fire series, Game of Thrones is another feather in HBO’s TV-producing cap, diversifying the network’s already impressive stable of historical and family dramas with its first epic fantasy. The casting of Bean as the show’s honorable protagonist is an obvious “get” given his past role as Boromir in the “The Lord of the Rings,” but the involvement of seasoned British character actors, some impressive newcomers like Merchant, and consistent talents like Dinklage and Headey give the show the legs it needs to make Martin’s dense narrative convincing (unfortunately I can’t help thinking of plastic wrap every time I see Addy’s King Robert). High production values in the cinematography, production design and costuming also give the show a cinematic credibility normally lacking in TV fare.

Game of Thrones: The Complete First Season includes the 10 episodes that aired on HBO between April and June 2011:

These are the same transfers used on the previous Blu-ray release, in 1080p and compressed using the AVC codec. This is, simply put, a gorgeous show that uses several different color palettes so as not to confuse the viewer as to where each story is taking place. King’s Landing often appears warm and vibrant, with lush, saturated colors. Winterfeld is dark and drab, with hints of blues. The North Wall is so heavily muted, it often appears as if it is black and white and then tinted in blue. Then there is Eros, which leans towards browns and yellows. Detail is rich and well-defined, providing the viewer with visible beard stubble on closeups of the men and textures on the many fabrics worn by the cast.

As I stated above, HBO has remixed the series in Dolby Atmos (and even included an Atmos trailer on Disc One), and even though this reviewer does not have Atmos installed (or even 7.1, for that matter), the Dolby TrueHD 5.1 fold down manages to improve upon the DTS-HD MA 5.1 tracks on the original release, providing a more active surround and low-end presence. Dialogue is often directed to the center channel, and remains clear and distinguished throughout, never getting lost amongst the major sound effects and score by Ramin Djawadi. My only real complaint is that unsuspecting viewers who do not have Atmos will choose the lossy Dolby Digital 5.1 track from the audio menu (which is the default), and not the Atmos, which contains a Dolby TrueHD 7.1 lossless track. HBO should have included Dolby TrueHD 7.1 as a selection from the menu, regardless.

Dolby Atmos Update: As Todd mentioned in the paragraph above, Dolby Atmos has to be selected from the audio menu. It's not the default track like on other Dolby Atmos equipped Blu-rays. I watched this in Dolby Atmos using a 7.2.4 system configuration (4 in-ceiling speakers). I haven't had the chance to watch every episode yet, but I watched two full episodes (1 and 9) and parts of three others. Overall with the exception of thunder and wind localized effects, the overhead channels were used for ambient music (soundtrack) and background effects and successfully created a more immersive sound field than using just my surround back and side channels. -- Adam Gregorich

All of the same bonus features from the previous Blu-ray release are included here, with no new additions.

The collection of extras includes some solid behind-the-scenes material, found in the short-but-interesting “making of” documentary and seven audio commentaries. Some of the shorter video featurettes re-use the content from the longer piece, making them more repetitive than they should be. Still, fans of the show should be pleased by the extras’ overall depth and scope.

Audio Commentaries: The number and variety of commentaries are bound to appeal to some, if not all fans. Most intriguing on its surface is the track from the “Game” author himself, who penned the script for the eighth episode. He can be a little too complimentary at times (and who wouldn’t be given how well his work has been adapted), but he offers some decent comparisons between the novel, his original script and what was ultimately filmed.

Episode One: Winter Is Coming with Executive Producers/Writers David Benioff and D.B. Weiss

In­-Episode Guide: ​The exhaustive compendium provides descriptions of the show’s characters, locations, and history in context with events of each episode.

Previews and Recaps (HD): Each episode includes the "previously" and "next" on promos that were originally attached to it.

Character Profiles (HD; 30:38): Originally produced for the Web, the actors take a moment from filming to describe the characters they play.


Complete Guide to Westeros: Repeated on each disc, the exhaustive compendium provides descriptions of the show’s numerous characters and locations, organized by noble houses and Westeros regions.

Lands: The North, The Riverlands, The Vale, King’s Landing, The Southern Kingdoms, Essos

Making Game of Thrones (HD; 30:00): Describes the genesis and development of the show, from the optioning of the novel, casting, location scouting, scoring, production design, special effects, stunts, costuming and more. The piece is brief considering the number of topics it covers, but it’s well made and ultimately interesting to anyone who enjoys the show.

From the Book to the Screen (HD; 5:14): Executive producers David Benioff and D.B. Weiss, and author George R.R. Martin talk about adapting the source material into a TV series. Unfortunately, the material is just a re-hash of the early parts of the “Making” documentary.

Creating the Show Open (HD; 5:07): The creators describe the inspiration and challenges of the impressive (and evolving) CGI title sequence.

Creating the Dothraki Language (HD; 5:27): Language creator David Peterson explains how he developed the language, the process of incorporating it into the scripts, and coaching the actors to speak it naturally.

Owners of the original release who have upgraded their home theaters (or plan to) may want to consider a double-dip, selling off or giving away that first version, as everything is included here. Fans of the series who never picked up the first season would be wise to consider this newer release, if nothing more than for the newer Atmos track and the slightly improved audio on the lossless (and now 7.1) track.

Ok. I Have the new Steelbook/Atmos GoT S1 Disc 1, I inserted it in my Sony BDP-S6200 and the player locks up immediately after the Dolby Atmos Demo/Promo. Thinking I bought a bad copy, I exchanged it for a new copy. Same exact thing. I played disc one In my PS3 and it went straight from the Atmos Promo to the Menu Language notice then to the main menu. Same results as the PS3 when I played it on my computer's blu drive. I do have my Sony's firmware updated. Does this mean my player's dying out on me?

What on earth was the point of this previously reviewed set being re-reviewed by someone without an Atmos set-up, when its addition is the only new feature? Not really a review at all then.


What's next: a 'review' of the latest blockbuster's Blu-ray/DVD combi - by someone without a Blu-ray player?

Brent Reid said:
What on earth was the point of this previously reviewed set being re-reviewed by someone without an Atmos set-up, when its addition is the only new feature? Not really a review at all then.


What's next: a 'review' of the latest blockbuster's Blu-ray/DVD combi - by someone without a Blu-ray player?

A couple of things:

2) I'm working with Todd on this and will be sampling it in Dolby Atmos (7.2.4) I will add my thoughts about the Dolby Atmos mix to the reviews of this and Season 2. I should have that done by the end of this weekend. We are all much better off if Todd does the main part of the review and I append.

Does this set contain the censored version of the last episode where they altered former President Bush's head?

I have updated the audio portion of Todd's review with my thoughts on the Dolby Atmos mix.
You must log in or register to reply here.