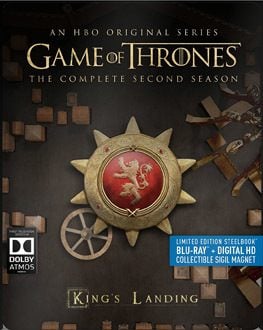 The death of King Robert Baratheon (Mark Addy) and the subsequent execution of his closest advisor Eddard Stark (Sean Bean) by Baratheon’s vicious son Joffrey (Jack Gleeson), has divided the kingdom and brought war to Westeros once more.

Vying for the throne, after learning of the illegitimacy of Joffrey’s claim, are Robert’s brothers Stannis (Stephen Dillane) and Renly (Gethin Anthony), but theirs is not a concerted effort. Eddard, prior to his death, identified the elder brother Stannis as the true heir to the throne, but Renly was favored by Robert and has a more powerful army to back his claim. Stannis, however, has allied himself with a mysterious and dangerous priestess named Melisandre (Carice Van Houten), who has foreseen his ascendancy to the Iron Throne.

Ned’s eldest son Robb (Richard Madden) is also deep in the fray, but his only desire is to avenge his father’s death and rescue his sisters Sansa and Arya (Sophie Turner and Maisie Williams) from King Joffrey and his calculating mother, the Queen Regent Cersei (Lena Headey). The capture of Cersei’s brother Jaime (Nikolaj Coster­Waldau), the formidable warrior dubbed “The Kingslayer,” certainly gives Robb the leverage he needs, if only he can manage to keep the man imprisoned, as well as control the smaller armies looking to take over Winterfell, the Stark’s native home in the north.

As the new King’s Hand, Tyrion (Peter Dinklage), Cersei’s youngest brother, looks to control some of his family’s more impulsive and dangerous schemes, but his position is only temporary as eventually his father Tywin (Charles Dance) will take over the role. When that day comes Tyrion will no doubt be relegated to his role as “The Imp,” but those around him would be wise not to underestimate the man who has proved just as shrewd as the Lannister patriarch, if not more noble.

Miles away in the northern territories, Eddard’s bastard son Jon Snow (Kit Harrington) continues his tour as a steward of the Night’s Watch. Venturing into the mountains beyond the Wall, a massive structure built to keep out the supposedly less civilized Wildlings, the band of warriors is looking to root out the former Night’s Watch ranger Mance Rayder, who has become the Free People’s latest warlord. Capturing a Wildling woman named Ygritte (Rose Leslie), Jon could meet up with Rayder face­to­face, if only he can survive the inhospitable frozen wasteland that holds more than it’s share of dangers, both natural and supernatural.

Meanwhile, in much warmer but no less desolate lands, Daenerys Targaryen (Emilia Clarke), the sole surviving descendant of the family that once ruled Westeros, wanders the Red Waste desert looking for aid for her now fractured Dothraki clan, brought on by the untimely death of her husband Khal Drogo (Jason Momoa). Though she has proved herself a true Targaryen, somehow facilitating the return of a dragon species long thought extinct and now looking to reclaim rule of Westeros, it does nothing to provide for the immediate needs of her subjects. Eventually the ragtag community will find refuge with the port city of Qarth, though their safety will not last long as powerful figures will look to harness the power of the dragons for their own ends.

In the second season of the celebrated HBO fantasy series, based on the equally celebrated George R.R. Martin fantasy novels, there’s an incredible expansion of both major and minor characters and story elements. With just 10 episodes in the season, it makes for some incredibly dense narratives per episode, and viewers are advised to pay attention. Fortunately, the writing team makes that a welcome task as the characterization, political intrigue and dramatic tension remains just as compelling and addictive as the first season’s, if not more so. The only character arc seeming to get the short end of the stick is Daenerys’s as she continues to slog through the desert in search of her destiny. Granted, the Targaryen heiress needs to be properly established as a viable conqueror to make a legitimate return to Westeros, but the length of the season naturally limits the growth the character can see, especially with a massive war across the sea taking priority. Groundwork for her return to Westeros does look properly established for the third season, however, promising we’ll soon see a shift in the kingdom’s power dynamics. The Night’s Watch and Wildlings story arc could produce this as well, though I wouldn’t expect to see anything significant along those lines until the fourth season. Though I was concerned about the series’ longevity given its obvious production expenses, the show has gathered such a following that it doesn’t seem so far fetched to consider it lasting at least that long. At least let’s keep our fingers crossed.

Game of Thrones: The Complete Second Season on Blu­-ray includes the 10 episodes that aired on HBO between April and June 2012:

1. The North Remembers
2. The Night Lands
3. What Is Dead May Never Die
4. Garden of Bones
5. The Ghost of Harrenhal
6. The Old Gods and the New
7. A Man Without Honor
8. The Prince of Winterfell
9. Blackwater
10. Valar Morghulis

These are the same transfers used on the previous Blu-ray release. Presented in its original broadcast aspect ratio of 1.78:1, the 1080p, AVC-­encoded transfer features inky black levels and a solid range of contrast, with only a few instances where the shadows look a bit too opened up. Color is incredibly rich, especially when garments like Melisandre’s red robe are set in contrast to the drab and earthy color palette that otherwise dominates the cast’s wardrobe. Detail is impeccable, though there are some hints of noise in more challenging images like the tightly concentrated, high contrast patterns in the snow covered mountain scenes with Jon Snow. Nevertheless, the picture is often quite breathtaking and no doubt superior to the broadcast high definition signal.

As I stated in the review of The Complete First Season, HBO has remixed the series in Dolby Atmos (and even included an Atmos trailer on Disc One), and even though this reviewer does not have Atmos installed (or even 7.1, for that matter), the Dolby TrueHD 5.1 fold down manages to improve upon the DTS-HD MA 5.1 tracks on the original release, providing a more active surround and low-end presence. Dialogue is often directed to the center channel, and remains clear and distinguished throughout, never getting lost amongst the major sound effects and score by Ramin Djawadi. My only real complaint is that unsuspecting viewers who do not have Atmos will choose the lossy Dolby Digital 5.1 track from the audio menu (which is the default), and not the Atmos, which contains a Dolby TrueHD 7.1 lossless track. HBO should have included Dolby TrueHD 7.1 as a selection from the menu, regardless.

Dolby Atmos Update: As Todd mentioned in the paragraph above, Dolby Atmos has to be selected from the audio menu. It's not the default track like on other Dolby Atmos equipped Blu-rays. I watched this in Dolby Atmos using a 7.2.4 system configuration (4 in-ceiling speakers). I haven't had the chance to watch every episode yet, but I watched a full episode (9) and parts of several others. Overall with the exception of thunder and other weather localized effects, the overhead channels were used for ambient music (soundtrack) and background effects; successfully creating a more immersive sound field. -- Adam Gregorich

All of the same bonus features from the previous Blu-ray release are included here, with no new additions.

The highlights of the bonus material are the In­-Episode Guide and War of the Five Kings interactive features, mainly because they provide impressive amounts of detail about the story and characters should anyone become lost or confused during the course of the season. The rest of the items – including 12 audio commentaries, behind-­the-­scenes featurettes, and alternate viewing formats – are just (some very thick) icing on the cake.

In­-Episode Guide: ​The exhaustive compendium provides descriptions of the show’s characters, locations, and history in context with events of each episode.

Previews and Recaps (1080p): Each episode includes the "previously" and "next" on promos that were originally attached to it.

War of the Five Kings: ​The exhaustive interactive guide provides information on each of the parties vying for the Iron Throne, covering each kingdom’s characters, geography, history, religion, battle maneuvers, and more. For anyone who had trouble keeping track of what was going on during the season, or just needs some clarification of plot points or character history, it’s a great resource.

Creating the Battle of Blackwater (31:16, HD): ​The behind-­the-­scenes documentary covers the planning and preparation of the most expensive episode of the season, Episode Nine: “Blackwater,” focusing on the production design, visual effects, stunts, practical effects, props, and makeup.

Game of Thrones: Inner Circle (24:03, HD): ​Emilia Clarke, Kit Harrington, Lena Headey, Michelle Fairley and Liam Cunningham, along with moderators David Benioff and D.B. Weiss, have a roundtable discussion about the various character and story developments of the second season.

The Religions of Westeros (7:34, HD): ​George R.R. Martin, David Benioff and D.B. Weiss talk about the role of religion in Westeros and how it influences the characters’ decisions and fates.

Owners of the original release who have upgraded their home theaters (or plan to) may want to consider a double-dip, selling off or giving away that first version, as everything is included here. Fans of the series who never picked up the first season would be wise to consider this newer release, if nothing more than for the newer Atmos track and the slightly improved audio on the lossless (and now 7.1) track.

I have updated the audio portion with my thoughts on the Dolby Atmos track.
You must log in or register to reply here.