Neal Israel’s Bachelor Party wears its tastelessness loudly and proudly like a badge of honor. Now respected Oscar and Emmy winning actor Tom Hanks broke free from television sitcoms with Splash! and this unsavory comic stew which wastes his comic talents (though he is just about the best thing about the movie) in a farce from the folks who made the Police Academy movies. It should come as no surprise, then, how overdrawn, dumb, and vulgar everything about this movie is. 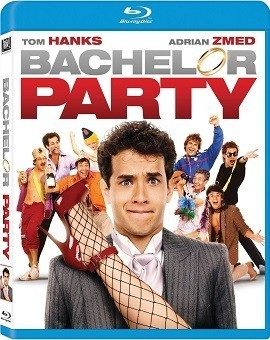 The tastelessness begins in the movie’s very first scene as Rick Gassko (Tom Hanks) propositions a nun for whom he drives a school bus. The movie has no place to go but up, but unfortunately, director-writer Neal Isreal and co-writer Pat Proft seem content to let the remainder of the movie flounder around in the mire. The title more or less sums up the plot for the film: Rick is marrying wealthy Debbie Thompson (Tawny Kitaen), much to the understandable dismay of her parents (George Grizzard, Barbara Stuart), and his grubby friends decide to throw him a bachelor party complete with stag films, hookers, and endless booze and drugs. The movie then plays out the events on the evening in question.Rationality, of course, goes right out the window with a movie so filled with coincidences and misunderstandings. The real world is banished so that this cartoon existence with these cutout characters can play on well past the point of endurance (an overlong and fairly slow moving 1 ¾ hours). Case in point: Rick and his guys invade a nice restaurant early on to discuss the fun they’re going to have at the upcoming party. The group (Hanks, Adrian Zmed, William Tepper, Barry Diamond, Gary Grossman) has to be the loudest, most uncouth band of ruffians imaginable short of a biker gang, but they are not even censured about their crass behavior (throwing food, spewing beer, belching) nor do the patrons around them see anything amiss. A late sojourn to a male strip club for the girls to unwind after their bridal shower offers the expected stunned looks from the ladies especially when one of the guys offers a tray full of hot dogs with one very special wiener. Of course, despite full frontal nudity for some of the women during the film, the movie won’t risk a rating harsher than an R to give equal screen time for the male anatomy.Tom Hanks shows some of the same likeable qualities with Tawny Kitaen that he displayed earlier in the same year in Splash! but in Bachelor Party, he’s allowed to overdo the cockiness to the point of being obnoxious in a tiresomely motormouth performance. Why shouldn’t Debbie’s father disapprove of Rick, rude and sarcastic to everyone he meets, as a match for his daughter? We’re asked to dislike the father character (played with starchy assurance by George Grizzard) because of his seeming stiffness and stuffiness, but because the script is only offering us character types, we’re supposed to be programmed to think a certain way about such an establishment type. His lack of hipness in comparison to the cool cat Rick is supposed to be a negative, but it’s all in the way one looks at what’s being portrayed.Robert Prescott deserves a medal for the humiliating number of pranks played on his character of snotty, elite Cole Whittier by the jealous, cruelly vengeful hipsters, but again, his only real crime seems to be that he’s rich and clean cut (if a bit of a snob) rather than one of the rude and crude rabble who surround Rick. He seems to have once been a suitor for Debbie, thrown over for Rick, but the script offers no reasons why the two never made it as a couple. Tawny Kitaen is pretty but seems to be inexperienced a bit and not in Hanks’ league as a comic performer, but the script lets her down, too, as her character is another that’s merely a sitcom sketch.Nothing in a film this inane is safe from abuse, so the picture revels in scenes of disgusting absurdity. One moment has a donkey inhaling cocaine with the expertise of Al Pacino in Scarface. Gary Grossman as one of the sex-mad hipsters dives into bed with a (very obvious to the rest of us) transvestite and later spends many minutes soaping his “disgusting” sexual encounter out of his mouth and off his body. That seems like a viable option for the rest of us after enduring this frantic, crude mess of a movie.

The film’s theatrical 1.85:1 aspect ratio is faithfully reproduced in this 1080p transfer using the AVC codec. Apart from some flesh tones which sometimes are a bit on the pink side and an occasional soft shot, the image quality is outstanding with excellent, detailed sharpness and strong, rich color. Black levels are likewise strong while contrast has been mostly well maintained throughout the presentation. The film has been divided into 22 chapters.

The DTS-HD Master Audio 1.0 offers better than average fidelity for a mono sound mix with dialogue always nicely recorded and delivered and never interfered with by Robert Folk’s noisy score or the accompanying sound effects. No signs of age-related artifacts like hiss or other noise can be heard.

Tom Hanks had some great films in his future when Bachelor Party was released in 1984, but there are only a few slight signs here of the serious and charismatic performer that he would subsequently become. The disc does offer for its fans an excellent visual representation of the movie and sound typical of the period of the film.

I realize you loathed this and probably don't care, but it's actually Gary Grossman, not Michael Dudikoff who sleeps with the transvestite.

Thanks. I'll make the change.

I remember watching this one pretty near non-stop when it first came out on VHS so despite knowing that I'm a very different person from when I was 10 years old, I'm probably going to have to buy this one. Thank goodness it's already dirt cheap!

I seem to remember that when the film was released back in 1984, some critic saying that the movie had sat on a shelf, deemed "unreleasable" by a studio executive, until Bosom Buddies and Splash made Tom Hanks a star.

I can see it sitting on the shelf until Splash came out, but Bosom Buddies was canned a couple years before it right? He made the awesome classic "Mazes and Monsters" between Buddies and this.

Personally, I think the film is a riot. It's worth the price just to hear Adrian Zmed sing "Little Demon."

I always got an extra chuckle out of seeing this open matte on HBO back in the day. You could see stagehands grab Cole as he falls. A couple years ago, I got lost in a multiplex that resembles the one in the movie.

What is Tom Hanks doing with the Leg Lamp from A Christmas Story?

Bachelor Party is the ultimate example of 'men behaving badly'. Pretty raunchy stuff, but nevertheless crudely amusing and delicious.
You must log in or register to reply here.