Posted on July 12, 2017 by Matt Hough
This vintage pilot feature is an interesting look at the origins of the TV series. 3.5 Stars

ABC’s hit television series The Untouchables was born as a two-part installment on Westinghouse Desilu Playhouse in 1959. Once the series became such a phenomenon, Desilu released this two-part pilot as a theatrical feature film called The Scarface Mob and is now offering it for sale separately as a DVD. While the murder and mayhem and seedy environs are pretty tame by today’s standards, this was pretty rough stuff for 1959 audiences, and it still packs something of a punch today with its gruff line-up of male character actors facing off against one of TV’s steeliest leading men, Robert Stack.

FBI agent Eliot Ness (Robert Stack) operating out of the Chicago office has been frustrated for years trying to take down the Al Capone (Neville Brand) crime empire. With so many of the police and FBI agents secretly on the take providing insider information to the mobsters when investigations and raids are about to transpire, Ness can never catch the crooks red-handed. So, he implores Hoover to let him set up an elite task force of seven incorruptible agents (Keenan Wynn, Bill Williams, Peter Leeds, Eddie Firestone, Robert Osterloh, Paul Dubov, Abel Fernandez) hand-picked by him whom he can trust to work closely together to destroy Capone’s operation, especially his illegal breweries and distilleries scattered all throughout Chicago. While Capone is serving the last months of his most recent arrest, his operation is in the hands of Frank Nitti (Bruce Gordon) who is finding it impossible to outmaneuver Ness and his squad. But once Capone is released, he declares full war on Ness and his men willing to do anything to intimidate the foxy Ness and even demanding hits on Ness and his men.

Paul Monash wrote the teleplay for the pilot basing his script on Ness’ insider book The Untouchables. In typical TV fashion, events transpire in procedural order from Ness’ early failed efforts to catch the mob red-handed to the formation of the elite FBI squad, Nitti’s foiled attempts to bribe and corrupt them, a series of lucky breaks (wiretaps; an undercover informant played by Joe Mantell who feeds Ness locations of breweries, the fulcrum of Capone’s illegal liquor operation), and then the reversal of Ness’ fortunes once Capone returns to set his tottering ship afloat once again leading to the final showdowns in a blazing shootout at his largest brewery near the stockyards and his infamous trial for income tax evasion. Those final courtroom scenes are rather anticlimactic and rushed (with narration provided, as he did for the ABC series, by columnist Walter Winchell) and pale dramatically to some of the richer material that has come before especially Ness’ specially outfitted armored truck for crashing through steel doors (a neat montage shows Ness destroying eight major Capone brewing operations), the murders of a couple of primary supporting characters, and the near-rape of Ness’ fiancé Betty Anderson (Pat Crowley). That sequence, a gripping Kiss of Death sequence with the gangsters anointing their hit man with full-lip kisses, and a burlesque number performed by Barbara Nichols’ chippie Brandy LaFrance (complete with pasties yet, very daring for 1959 television or films) certainly provide eye-opening views of the danger-filled, seedy world of these hoods and their gals. But director Phil Karlson in true TV style goes in for more close-ups and fewer big set pieces than one would see in a legitimate feature film.

Robert Stack as Eliot Ness displays the same firm-jawed, iron-willed moxie that would win him an Emmy for his work on the series, and he’s synonymous with the role despite Kevin Costner’s able performance in the 1987 De Palma film of The Untouchables. Neville Brand is absent for half of the movie as Al Capone, but his few scenes in the driver’s seat are unsettling and perilously volatile, and Bruce Gordon as Frank Nitti has his own vintage of corruption working for him. Keenan Wynn, alone among the other members of the elite squad, manages to forge a multi-dimensional character as Joe Fuselli. Barbara Nichols is her always great self as the man hungry stripper Brandy, and Joe Mantell as her weaselly husband Georgie, desperate to do anything to impress her, offers a first-rate and rather moving performance. Pat Crowley exudes the genuine wholesomeness she always displayed in her roles, and John Beradino does some impressive emoting as Nitti flunky Johnny Giannini who disappoints his boss once too often.

The image retains the 4:3 aspect ratio of its original television presentation though with so much headroom, the image could be zoomed to a more theatrical 1.66:1 without losing anything important. Sharpness is fine for standard definition, and the grayscale is actually quite impressive with especially good black levels. Only a few stray speckles and slight scratches mar the presentation (those and one reel change cue which wasn’t removed) though some of the tweed and patterned jackets do display some aliasing.

The Dolby Digital 2.0 sound design is decoded by Dolby Prologic into the center channel. While dialogue is always easily understandable, there isn’t much depth to the mix with the shootouts on the streets and in the warehouses offering good but not great fidelity. Music and sound effects are blended together professionally. There are no age-related problems with hiss, crackle, flutter, or hum.

Introductions (3:37): Attached to the beginning of the presentation are Desi Arnaz’s and Walter Winchell’s introductions to each installment of the story. While these add virtually nothing to the program, for completist’s sake, it’s good they’re lumped together before the actual movie begins. The program plays in its movie format with no breaks between parts one and two. 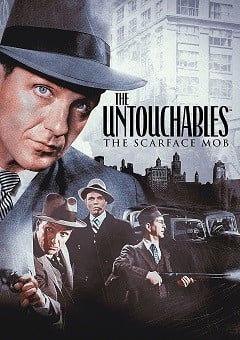