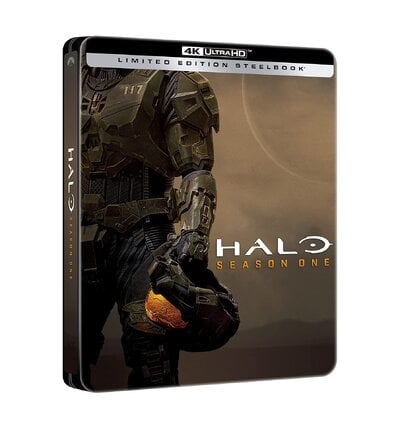 minutes of exclusive content that takes viewers beyond the screen, providing a deeper look into the world of HALO. Plus, the Blu-ray, 4K UHD and limited-edition 4K UHD Steelbook include collectible art cards of Kwan Ha, Dr. Halsey, Soren, Master Chief, Vannak, Riz and Kai.
HALO: SEASON ONE takes place in the universe that first came to be in 2001 through the launch of Xbox’s first “Halo” videogame. After years of human civil war and growing political unrest, mankind’s very future is threatened when our outermost colonies intrude upon the sacred worlds of an alien threat known as the Covenant. As this fanatical powerful alliance destroys world after human world, only one soldier slows their advance – a cybernetically enhanced “Spartan” supersoldier, the Master Chief (Pablo Schreiber, “American Gods” and “Orange is the New Black”). As the mystery of the Covenant's true ambitions are revealed, the Master Chief must find a way to save humanity from the alien threat while also coming to terms with the secrets of his own enigmatic past.
The series stars Schreiber as the Master Chief or Spartan-117; Natascha McElhone (“Californication”) as Dr. Halsey, the brilliant, conflicted and inscrutable creator of the Spartan super soldiers; and Jen Taylor (“Halo” game series, RWBY) as Cortana, the most advanced AI in human history and potentially the key to the survival of the human race. Additional stars include Bokeem Woodbine (“Fargo”), Shabana Azmi (Fire), Natasha Culzac (“The Witcher”), Olive Gray (“Half Moon Investigations”), Yerin Ha (“Reef Break”), Bentley Kalu (Avengers: Age of Ultron), Kate Kennedy (“Catastrophe”), Charlie Murphy (“Peaky Blinders”) and Danny Sapani (“Penny Dreadful”).
With over five hours of special features, the epic DVD, Blu- ray, 4K UHD and limited-edition 4K UHD Steelbook collections include:
• Dissecting the Battle of Madrigal - The Halo crew takes you behind the scenes to dissect one of the most important moments of the show, the Battle of Madrigal.
• Becoming Spartans - Our larger-than-life heroes introduce one another and share their thoughts on
the process of becoming Spartans. Master Chief, Kai, Riz, Vannak and Soren recollect their memories from training and early bootcamp to the epic result we see on screen. Showrunner Steven Kane and director Otto Bathurst join the Spartan team to reveal the challenges and joy of creating near-perfect superhumans encountering imperfectly human emotions for the very first time.

o 101 - In this premiere episode of Halo the Series: Declassified, Sydnee is joined by the Master Chief himself, Pablo Schreiber, Master Chief's highly advanced A.I., Cortana, and AEW professional wrestler Adam Cole.
o 102 - Host Sydnee Goodman takes viewers behind the scenes of Episode 2 ("Unbound") with actor Bokeem Woodbine, Director Otto Bathurst, as well as some lucky fans who got to attend the red-carpet premiere of Halo the Series.
o 103 - We dive into Episode 3, "Emergence." Here, host Sydnee Goodman talks with star Charlie Murphy (Makee). Plus, see how the show built one of its most impressive sets and meet some of the most passionate Halo fans in the world.
o 104-HostSydneeGoodmanwelcomesCortanaherself,JenTaylor!Theydiscuss Jen's longtime role as Master Chief's fan-favorite A.I and how bringing the character to life on TV brought new challenges. Plus, get a lesson in the Covenant language of Sangheili from the linguists who created it. Then, passionate Halo fans explain what Master Chief means to them. Finally, get a special look behind the scenes of the incredible visual effects of Halo the Series, including how the talented artists brought Cortana to live action.
o 105 - In this installment of Halo the Series: Declassified, host Sydnee Goodman talks with Kate Kennedy (Kai-125). Plus, behind the scenes of the stunts and weapons of Halo the Series and a look at the world's largest Halo collection.
o 106 - Host Sydnee Goodman is joined by Natascha McElhone (Dr. Halsey) to explore the complicated nature of Halsey's work with the Spartans. Plus, we visit Spartan bootcamp, talk with composer Sean Callery, and more.
o 107 - Host Sydnee Goodman chats with actress Yerin Ha (Kwan Ha) about her character's journey from average kid to freedom fighter. Plus, enjoy a visit from actor Wil Wheaton, a closer look at iconic Halo vehicles, and plenty of Easter eggs.
o 108 - In this installment of Halo the Series: Declassified, host Sydnee Goodman welcomes star Olive Gray (Dr. Miranda Keyes) to discuss their approach to a character that has complicated relationships with everyone around her. Plus, behind the scenes with Director Jonathan Liebesman, a cosplay tutorial, and more.
o 109 - On the finale installment of Halo the Series: Declassified, host Sydnee Goodman welcomes Executive Producer Kiki Wolfkill and Executive Producer/Showrunner Steven Kane to dive deep into all the big events, so far.

Plus, enjoy a thank you from the cast and crew and an enlightening discussion about reflecting the real world in sci-fi.
HALO: SEASON ONE is produced by SHOWTIME® in partnership with 343 Industries, along with Amblin Television. HALO is executive produced by Steven Kane, alongside Steven Spielberg, Darryl Frank and Justin Falvey for Amblin Television in partnership with 343 Industries, director Otto Bathurst and Toby Leslie for One Big Picture, and Kyle Killen and Scott Pennington for Chapter Eleven. Kiki Wolfkill, Frank O’Connor and Bonnie Ross serve as executive producers for 343 Industries. The series is distributed internationally by ViacomCBS Global Distribution Group.
Episodes:

Wow. I'm surprised Paramount's going 4K with this, after not doing so for the (current) Star Trek shows.

I'm not a gamer, so I went into this without any background, and was pleasantly surprised by it as an SF/action series.