The Fate of the Furious may not match the best of the series thus far (Furious Five), but it offers plentiful action amid the usual personalities and a few new faces to the franchise that won’t likely disappoint fans.

The Fast and Furious gang is back for their eighth adventure, this time fighting against one of their own in F. Gary Gray’s The Fate of the Furious. Mindless over-the-top action and terrific stunts on a global scale, this franchise now rivals James Bond in the size and scope of its adventures, and even if the characters are one-dimensional ciphers (ironically, the name of one of the film’s antagonists) and the ending is never in doubt, action junkies aren’t likely to complain about this latest effort, especially with the fantastic array of muscle cars and other technology spread over its now international agenda. The UHD release ups the ante visually with color, clarity, and highlights that are truly stunning.

Dom (Vin Diesel) and Letty (Michelle Rodriguez) are enjoying their honeymoon in Havana and even talking the possibility of children when a mysterious woman named Cipher (Charlize Theron) seduces Dom back into a world of crime betraying those closest to him by joining forces against the team in their latest mission. Once an EMP weapon is stolen, it’s only the beginning of Cipher’s master plan to become the world’s police chief. To combat her seemingly insurmountable technological advantage, Hobbs (Dwayne Johnson) must put aside his vendetta against Deckard (Jason Statham) and work with him and the team’s other members (Tyrese Gibson, Chris “Ludacris” Bridges,  Nathalie Emmanuel) guided by shady governmental agent Mr. Nobody (Kurt Russell) and his new trainee the team nicknames “Little Nobody” (Scott Eastwood).

The Chris Morgan screenplay begins in Havana, taking the franchise back to its roots as a street racing saga before the team begins its round-the-world trek to thwart the evil Cipher. In Berlin, there’s a starling bit of automobile destruction by a giant wrecking ball, but the film really switches into high gear with its sojourn to New York City where we’re first amazed when the Nobodys bring the team to the “Toy Shop,” an immense structure housing dozens of vehicles of every description (many of which play a part in the film’s grand finale) but have our eyes popping out of our heads as Cipher unleashes her technological trump cards sending hundreds of self-driven cars chasing after our heroes and a Russian ambassador who has nuclear launch codes in his briefcase being tailed by both heroes and villains. F. Gary Gray and his second unit director Spiro Razatos direct the action-packed chases here and in Vladovin, Russia (actually filmed in Iceland) with a sure hand keeping tension high with no dips in the intensity of the mayhem though the tendency to show intense action slowed down before climactic crashes over and over becomes a tiresome cliché by the end of the movie. Yes, it would be nice to see more character development (but that would take time away from crashes, chases, and explosions), and character dynamics like the rivalry between Hobbs and Deckard either need some resolution or continuation for future installments. And it’s irritating to have Deckard’s brother Owen (Luke Evans) to be brought in for ten minutes of screen time and then abruptly dropped from the rest of the film. He’s not even invited to the end-of-movie celebration party as the family is reunited. It’s sloppiness like this (along with cars that can withstand bullets, explosions, and fire and people who can jump from vehicles going hundreds of miles an hour with no scratches or broken bones) and some glaring continuity gaffes (the tears in Dom’s eyes in a succession of shots that appear, disappear, and reappear) that aren’t worthy of a franchise entry that cost a couple of hundred million dollars.

Because of the nature of the hold that Cipher has over him, Vin Diesel gets to bring somewhat more emotion to his role of Dom than in previous entries. Chris “Ludacris” Bridges and Tyrese Gibson rival each other for the most wisecracks and putdowns though Gibson gets to engage in some fun early back-and-forth with the uptight Little Nobody of Scott Eastwood that isn’t sustained throughout but should make for some good banter for future installments. Charlize Theron has enormous fun as the film’s villain, mostly coolly going about her aim of world domination with only a few moments where her feathers get ruffled. It’s also fun seeing Helen Mirren pop into the picture for a couple of entertaining sequences with both Vin Diesel and Jason Statham, himself having his most outstanding work near film’s end where he swaps quips with a baby as he wipes out of a nest of bad guys. Dwayne Johnson puts his enormous physique to good use as he takes over the reins of the team once Dom goes rogue, and Michelle Rodriguez is an adequate love interest who never loses faith that Dom has a reason for turning his back on their marriage and the team which he had considered his family.

The film’s 2.40:1 theatrical aspect ratio is faithfully delivered in a 2160p transfer using the HEVC codec. The Cuba sequences are insanely colorful and vibrant with saturation levels as rich and deep as possible without blooming. Elsewhere, hues are controlled and believable. Sharpness is also terrific with lots of details like wrinkles and freckles to be seen in close-ups. Contrast has been well regulated for a consistently wonderful picture, and black levels are reference quality as well. The use of HDR10 (Dolby Vision is also available, but my player doesn’t decode it) adds very impressive highlights during the Cuban sequence, and the fiery orange flames during the New York “raining cars” scene and later on the icy tundra are really eye-catching delights. The movie has been divided into 20 chapters.

The DTS:X sound mix (decoded as DTS Master Audio 7.1 on my equipment) offers as much bang for the buck as franchise fans would expect for such an all-action film. Along with Brian Tyler’s driving score and with some hip-hop added in the mix combined with the atmospheric effects which are split quite effectively in this wide-ranging soundtrack, the dialogue has been well recorded and has been placed in the center channel.

On the UHD disc is one bonus feature: Audio Commentary: director F. Gary Gray expresses his profound thanks continuously (amid lots of silent passages) for his hand-working cast and crew but too often describing what we’re seeing before offering anecdotes about the sequences.

The remainder of the bonus material is found on the enclosed Blu-ray disc:

The Cuban Spirit (8:04, HD): director Gary Gray is effusive in his praise for the hospitality of Cuba for allowing the film to shoot there. Others offering their appreciation are producer Neal H. Moritz, writer Chris Morgan, and actors Vin Diesel, Michelle Rodriguez, and Janmarco Santiago.

All About the Stunts (HD): the all important stunt work in the three primary action sequences is discussed by Gary Gray, Jack and Andy Gill, Chris Morgan, Dennis McCarthy, Spiro Razatos, Neal Moritz, and actors Vin Diesel and Tyrese Gibson.

Extended Fight Scenes (5:03, HD): two action sequences, the one in prison and the one on the plane, may be watched in montage or separately.

Digital Copy: code sheet enclosed in the case. The digital copies include separate codes for both the theatrical cut of the film which is on the disc and the extended director’s cut available only digitally.

The Fate of the Furious may not match the best of the series thus far (Furious Five), but it offers plentiful action amid the usual personalities and a few new faces to the franchise that won’t likely disappoint fans. The UHD version is the go-to visual experience disc for this blockbuster. 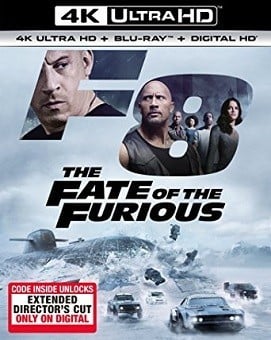