Forum List What's new Dark Style Change width
Log in Register
What's new Search
Menu
Log in
Register
Navigation
Install the app
More options
Dark Style
Close Menu
Posted on May 19, 2019 by t1g3r5fan
You are using an out of date browser. It may not display this or other websites correctly.
You should upgrade or use an alternative browser.
Underrated Hammer Horror debuts on US Blu-ray 4 Stars

While the company was best known for their excursions into Gothic horror, Hammer Films also made a few excursions into modern horror as well during their heyday. One of the prime examples of this was The Witches (AKA The Devil’s Own), a blend of supernatural horror and suspense with a present day setting that sets it apart from previous Hammer films dealing with black magic. Previously released on DVD by Anchor Bay, Shout Factory – through the Scream Factory brand – has given the movie its US Blu-ray debut.

After a traumatic experience while teaching at a mission school in Africa, Gwen Mayfield (Joan Fontaine) manages to recover and is offered a job as a headmistress of a private school in the small village of Heddaby. She accepts and finds herself adjusting to the tranquil life of the small village; however, that tranquility is shattered when mysterious events leave one student in a coma and his father dead. Gwen and local journalist Stephanie Bax (Kay Walsh) deduce that witchcraft may be the cause of it all, but Gwen is soon comes face to face with the horrifying truth, one that puts her sanity at risk and the life of another of her students in grave danger…

When compared to the rest of the Hammer oeuvre, The Witches stands out compared to the Gothic horrors of Dracula and Frankenstein; not only is it set in modern times, but it operates more as a slow burn thriller with supernatural elements rather than a straight out horror movie. Cyril Frankel, who also helmed the equally underrated Hammer thriller Never Take Candy from a Stranger (1960), guides the film with a steady hand and builds tension with both skill and style; the film also makes great use of its location shooting for atomsphere – a departure from the typically studio-bound approach (although interiors were shot in the studio). The only real demerit against the film is at a crucial point where amnesia is introduced as a plot device; there’s never really a major attempt to explain or explore why it happened and for what purpose, making it look like the movie takes a hard left turn at a very critical point in the story. Nonetheless, the film is still a very effective little chiller that melds the modern day setting with the supernatural quite well with a few good unsettling moments mixed in.

In what would be her final feature film performance, Joan Fontaine gives a solid and credible performance as Gwen; she also originated the project and co-produced it, though she was uncredited for that part. Kay Walsh is very effective as the local journalist who may be harboring a secret; it would be a notable role in her career as a character actress. Alec McCowen casts a memorable impression as a failed clergyman and brother of Stephanie; Ingrid Boulting (credited here as Ingrid Brett) is suitably vulnerable as the student who becomes a target of witchcraft. Other notable appearances include Ann Bell as a fellow schoolteacher, Hammer favorite Duncan Lamont as the local butcher, Leonard Rossiter as an asylum doctor, Martin Stephens (in his last film) as a student who also falls victim to witchcraft, John Collin as an ill-fated father of one of the students, Michele Dotrice as Gwen’s maid, and Gwen Ffrangcon-Davies as a grandmother who dabbles in witchcraft.

The original 1:66:1 aspect ratio is intact on this HD transfer, presumably the same one used for Studiocanal’s 2013 Region B release of the movie on Blu-ray. For those wondering, this print opens with the original censor card and the 20th Century Fox logo; a rather odd combination given that the Fox logo was seen on the original US release of the movie and the censor cards usually accompanied the UK versions (not to mention the Warner-Pathe credit at the end of the movie). Anyway, film grain is organic for the most part, except it’s a little more dense in the first couple of scenes in the pre-credits prologue. Colors and fine details are rendered faithfully with minimal instances of age related artifacts, again mostly pertaining to the opening minutes of the movie. Overall, this transfer is an improvement over the old Anchor Bay DVD and likely represents the best the movie has looked on home video.

The original mono soundtrack is presented on a DTS-HD Master Audio track for this release. Dialogue and sound effects are both strong and clear, and Richard Rodney Bennett’s score has great fidelity and ambiance. There’s very little in terms of age related artifacts – crackling, popping, hissing, and distortion – or dropouts, making this the best the movie has sounded on home video.

Commentary by filmmaker/historian Ted Newsom – Recorded for this release, Newsom goes over some of the details on the production while sharing some stories as well; some of the commentary is a little disjointed with a few pauses, but it’s never dull.

Hammer Glamour (44:09) – This featurette, from 2013, examines the roles of the women in Hammer Horror. Among those interviewed include Valerie Leon (Blood from the Mummy’s Tomb), Caroline Munro (Captain Kronos – Vampire Hunter), Martine Beswick (Prehistoric Women), Madeline Smith (Frankenstein and the Monster from Hell), Vera Day (Quatermass II), and Jenny Hanley (Scars of Dracula).

Still Gallery (4:28) – A series of 58 color, black-and-white, production, and promotional stills are presented here, some courtesy of Hammer Films and Brett Cameron.

Not carried over from Anchor Bay’s DVD release is an episode of World of Hammer entitled Wicked Women (I would have to assume that it’s likely being held for inclusion on a future Hammer Film release by Shout).

Underrated in the larger oeuvre of Hammer Horror, The Witches is still an effectively made and executed little chiller. Scream Factory has done a great job giving the film its first Blu-ray release here in the States, with solid marks in presentation as well as special features. Recommended for fans of the Hammer catalog or horror fans in general. 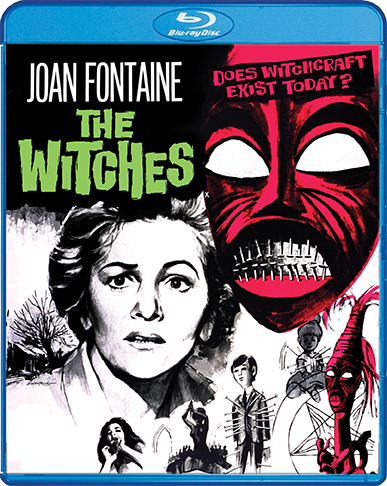