By the beginning of the 1970’s, Hammer Films was at a crossroads. American financing had stopped following the lackluster returns of Frankenstein Must be Destroyed (1969) and Moon Zero Two (1969); also, the success of films like Rosemary’s Baby (1968) and Night of the Living Dead (1968) forced the company to push the envelope in terms of shock factor. Scars of Dracula – the sixth film in the company’s Dracula cycle – made an effort to hem closely to tradition while introducing new elements. Previously released on DVD by Anchor Bay, Shout has picked up the film for its Blu-ray debut.

Revived by the blood of a bat, Count Dracula (Christopher Lee) renews his reign of terror upon a local village that tried to destroy him. At the same time, Simon Carlson (Dennis Waterman) and his fiancée Sarah (Jenny Hanley) search for Simon’s missing brother Paul, last seen heading towards Dracula’s castle. With little to no help from the locals, Simon and Sarah find themselves basically alone in fighting the Count, who has designs on Sarah becoming his latest mistress…

As far as most films go in the series, Scars of Dracula covers mostly familiar territory, with some few exceptions. For instance, several elements from Bram Stoker’s initial conception of Dracula are retained here; the Count is a charming host, he does have command of nature, and – in what is likely the best of the elements introduced here – he able to scale walls, like he does in a key moment in the movie. Also, with censorship standards relaxing in Britain at the time, we’re able to see more shocking moments that otherwise wouldn’t have been permitted; for example, the aftermath of the slaughter of the village women in the church at the beginning of the movie and Dracula torturing his servant Klove with a red hot sword stand out amongst these additions of shock, horror and gore. Despite these elements added, the film’s major problem lies in the fact that the material had become so familiar by this point that one could figure out what’s going before the characters do; the absence of Peter Cushing as Van Helsing certainly didn’t help either (strictly this writer’s opinion, though). Although it tries to mix new elements with the tried and true formula, Scars of Dracula comes off as likely the low point of the series and the last time the Count would stalk his prey in a Gothic setting (the next two films in the series – Dracula A.D. 1972 (1972) and The Satanic Rites of Dracula (1973) would take place in a modern day setting); it’s still watchable, but a far cry from the glory of the first Dracula the studio made.

Returning for the fifth time as the Count, Christopher Lee easily stands out amongst the cast; he is also given more lines to say than in previous entries (save for Horror of Dracula). Dennis Waterman is a modest but rather bland leading man; Jenny Hanley fills the Hammer Glamour mold beautifully as Sarah (even though her voice was dubbed by Nikki Van der Zyl). Amongst the supporting cast, Patrick Troughton makes a memorable impression as the servant Klove; he was just coming off of a successful run on British TV as the second Doctor Who. Other notable appearances include longtime Hammer favorite Michael Ripper as a rather taciturn landlord, Michael Gwynn as a priest, Wendy Hamilton as a serving girl at the village inn, Bob Todd and Delia Lindsay as the burgomaster and his daughter, Anouska Hampel as the bride of Dracula, and Christopher Matthews as Paul, whose disappearance moves the plot into high gear.

The movie is presented in both its original 1:85:1 aspect ratio and an alternate 1:66:1 open matte aspect ratio for this release. This HD transfer of the movie (in both ratios) keeps intact nearly all of the violent scenes trimmed by the BBFC (although the scene where Dracula drinks the blood from the stab wounds from one of his victims is still missing here) and features a relatively organic structure of film grain as well as a decent color palette and rendering of the fine details. Issues like scratches, dirt, and dust are mostly kept minor on both versions of the movie; overall, this is likely the best the film will look on home video and a nice improvement over the previous DVD.

The original mono soundtrack is presented on a DTS-HD Master Audio track for this release. Dialogue and sound effects are both strong and clear without being too intrusive on the other; James Bernard’s score has great ambiance and fidelity given without being overpowering and intrusive on the dialogue and sound effects. This is by far the best the movie will ever sound on home video and represents a great improvement over the Anchor Bay DVD.

Commentary by filmmaker/film historian Constantine Nasr and film historian Randall Larson – Newly recorded for this release, the film historians go over the movie in two very specific details: Nasr goes over some of the differences between the initial script and what ended up in the final cut as well as some of the flaws & Larson dissects the James Bernard score compared to the previous Hammer Draculas. Overall, a very informative track and a nice complement to the legacy commentary.

Commentary by actor Christopher Lee, director Roy Ward Baker and Hammer historian Marcus Hearn – Carried over from the Anchor Bay DVD, the director, actor, and Hammer historian look back on the film and its many details; Baker especially goes into detail about the battles he had with the BBFC over the cuts made to the film.

Blood Rites: Inside Scars of Dracula (18:03) – This featurette goes over some of the behind-the-scenes details of the movie, including some of the issues trying to bring new elements into the tried and true formula the studio was used to employing. Among those interviewed include actress Jenny Hanley, editor Kevin Lyons, and authors Jonathan Rigby, John Johnston, and Alan Barnes.

Theatrical Trailers (2) (5:05) – Both the original UK & US double bill trailers are presented here.

Still Gallery (10:20) – 136 promotional, behind-the-scenes, and poster and lobby cards are presented here; some of the stills were provided by Brett Cameron.

Notably missing here from Anchor Bay’s previous DVD release is the hour-long documentary The Many Faces of Christopher Lee and a pair of music videos featuring Lee and Gary Curtis (O Sole Mio/It’s Now or Never & She’ll Fall for Me).

Although it’s not on the same level as previous entries in the Dracula series, Scars of Dracula does deliver in terms of shocks and atmosphere. Shout Factory continues its great run through the Hammer catalog with solid marks in both audio and visual quality along with a great slate of special features. Recommended for fans of Hammer films and worthy of an upgrade from the Anchor Bay DVD. 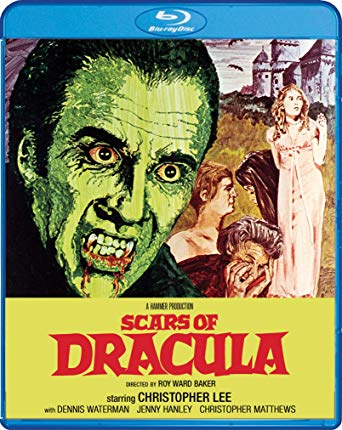