Forum List What's new Dark Style Change width
Log in Register
What's new Search
Menu
Log in
Register
Navigation
Install the app
More options
Dark Style
Close Menu
Posted on December 20, 2020 by t1g3r5fan
You are using an out of date browser. It may not display this or other websites correctly.
You should upgrade or use an alternative browser.
First Hammer Horror debuts on Blu 4.5 Stars

Before entering the horror film fray, Hammer Films had been known for their work in the film noir genre as well as what was referred to as “quota quickies” in the UK. However, the success of The Quatermass Xperiment (1955) started to change the fortunes of the studio, which had been reeling under financial strain; after a couple of excursions into sci-fi, the studio made its presence in the horror genre known with The Curse of Frankenstein. Long available on DVD here in the US, Warner Bros. has finally given the movie its Blu-ray debut here as part of the Warner Archive Collection.

In 19th century Switzerland, Baron Victor Frankenstein (Peter Cushing) is about to face the guillotine after being convicted of the death of his maid. He tells the visiting priest how he got there: he had ambitious plans in making a man out of several body parts using the knowledge gained from his former tutor and mentor Paul Krempe (Robert Urquhart). Paul wants no part of this new endeavor, but Victor forges on, determined to explore beyond the boundary that separates life and death. However, his pursuit of creating the prefect man instead unleashes a horrifying ripple effect in the form of the hideous creature (Christopher Lee) born from this experiment, one which will seal the Baron’s fate…

As the genesis of what would become known as Hammer Horror, The Curse of Frankenstein helped set the template of what was to come from the studio. The famed Mary Shelley story had already been told several times by Universal, but always in black and white; this movie represented the first time the story was told in full blooded color while pushing the boundaries in showing blood and gore on the screen. Under the direction of Terence Fisher and working from a script by Jimmy Sangster, the creature is less of the focus here than the Baron, who’s presented as an unrepentant sociopathic dandy in comparison to the more mad and sullen scientist version often seen in the Universal movies. Finally, the contributions of production designer Bernard Robinson, cinematographer Jack Asher, composer James Bernard and makeup artist Phil Leakey cannot be overlooked here as they give the movie a very lush and elegant look in addition to an air of dread and horror; Leakey’s design for the creature is likely the second most recognizable look for the monster in film history (largely owing to necessity, since Universal held the copyright to Jack Pierce’s iconic design). By giving the horror genre a huge boost due to their unique interpretation of this classic tale, Hammer Films ensured that The Curse of Frankenstein would make the genre viable and relevant again while also ensuring the studio would be flush with success by the next major entry in their distinct brand of horror, their version of Bram Stoker’s Dracula (1958).

After achieving success on British TV and appearing in small parts on the screen, Peter Cushing would be assured horror icon status with his portrayal of Victor Frankenstein (which he would reprise 5 more times for Hammer); that status would be further cemented over the course of the next 17 years with the studio. Also making the leap from small film roles to horror legend is Christopher Lee in his brief yet notable role as the creature; like Cushing, he would also cement his status over the next two decades – largely owing to his portrayal of Dracula and The Mummy (1959). Hazel Court would also begin her run in horror movies here with her portrayal of Elizabeth, Victor’s cousin and fiancée; Robert Urquhart also makes the most of his role as Paul Krempe, who serves as the moral compass to the movie. Rounding out the cast here are Valerie Gaunt as the ill fated maid Justine, Noel Hood as Victor’s aunt, Fred Johnson as the blind grandfather, Alex Gallier as the priest who listen’s to Victor’s fantastic tale, Andrew Leigh as the burgomaster, and Paul Hardtmuth as Professor Bernstein, whose brain becomes a crucial part in creating the creature.

The film is presented in three different aspect ratios, all taken from the same brand new 4K master from separation elements used for this release): 1:85:1 (exhibited in the initial US release) and 1:66:1 on Disc 1 in addition to an open matte 1:37:1 on Disc 2 (representing what had seen on 16mm prints, TV and previous home video releases for many years). Film grain is organic, with fine details represented faithfully and the color palette more vivid than previous releases (a close up shot of Baron Frankenstein holding an eyeball is restored to the movie for the first time since its initial US release); there’s definitely some inherent softness to the image in some scenes – largely owing to the fact the original camera negative wasn’t used for this transfer – but much of this is largely confined to the opening and closing credits as well as the opticals including medium and long shots. There’s minimal cases of scratches, dirt, tears or warping present, which means that this release likely represents the best the movie will ever look on home video.

The film’s original mono soundtrack is presented on a DTS-HD Master Audio track for this release. Dialogue is clear and strong, with the sound mix and full blooded James Bernard score both given faithful representation without crowding each other out. There’s minimal cases of hissing in addition to crackling and distortion present, also making this release likely the best the movie will ever sound on home video and another improvement over previous home video releases.

Commentary by film historians Steve Haberman & Constantine Nasr – Newly recorded for this release, Haberman and Nasr go over the film’s production history as well as several of the differences between Jimmy Sangster’s final draft of the screenplay and earlier script; as always, the two provide a wealth of information.

The Resurrection Men: Hammer, Frankenstein and the Rebirth of the Horror Film (21:51) – This new featurette has magazine editor Richard Klemensen going over some of the details of how this movie helped to revitalize the horror genre in the 1950’s.

Hideous Progeny: The Curse of Frankenstein and the English Gothic Tradition (22:49) – Sir Christopher Frayling talks some of the differences between the movie and Mary Shelley’s novel – in addition to a brief primer on the Gothic genre of literature – in this new featurette.

Torrents of Light: The Work of Jack Asher (15:14) – Cinematographer David J. Miller talks about Asher’s work with Hammer during their golden years (1957-1962) in this new featurette.

Diabolus in Musica: James Bernard and the Sound of Hammer Horror (17:05) – Composer Christopher Drake goes over some of the musical motifs Bernard used in his work for the company in this new featurette.

A success at the box office, The Curse of Frankenstein resurrected the horror genre and gave Hammer Films a blueprint for success in the years that followed its release. Warner Archive has delivered one of its best releases of 2020 with a stellar HD transfer viewable in three different aspect ratios in addition to a solid wealth of special features exploring the making of the movie. Very highly recommended and an easy upgrade from previous home video releases.

Great review - I agree with your evaluation regarding the transfer and presentation.

1.66:1 was not 'the standard projection ratio' at that time in the UK; this canard is endlessly repeated as a truism, but it's not. Please refer to the UK section on this page: "Widescreen Documentation - 3dfilmarchive" http://www.3dfilmarchive.com/home/widescreen-documentation
Last edited: Dec 20, 2020

The inherent softness is not limited to the titles and opticals (please call them what they are - they're not "transitions)) - the entire image in long shots and medium shots is slightly soft. It's fascinating to me how many people don't mention that at all. Mr. Harris did, of course - it's not terrible or anything, but I'm not sure how people aren't seeing it.

OK, I've updated my review to incorporate the changes.

You always learn something new when you're reviewing movies and going over the history of film and it's a never ending process, which - of course - is perfectly fine.

haineshisway said:
The inherent softness is not limited to the titles and opticals (please call them what they are - they're not "transitions)) - the entire image in long shots and medium shots is slightly soft. It's fascinating to me how many people don't mention that at all. Mr. Harris did, of course - it's not terrible or anything, but I'm not sure how people aren't seeing it.
Click to expand...

Kodak replaced their 5216 sep stock at some point in 1956 with the long-running 5235 . One might wonder if Humphries had some left over, and used it for Curse. The masters are just slightly soft overall. Scanning and recombine appears nicely performed by MPI.

Stock changes are an interesting thing. Normally, a camera dept has Kodak set enough stock of the same emulsion batch aside to cover an entire shoot with extras. But occasionally, a film is shot with a different stock entirely. Mad World, for example was mostly photographed on 5250, but also a bit of 51 mixed in.

You always learn something new when you're reviewing movies and going over the history of film and it's a never ending process, which - of course - is perfectly fine.
Click to expand...

Excellent; btw George Feltenstein has confirmed that the premieres both sides of the pond were presented at 1.85:1.

Robert Harris said:
Kodak replaced their 5216 sep stock at some point in 1956 with the long-running 5235 . One might wonder if Humphries had some left over, and used it for Curse.
Click to expand...

It's very possible after all this was an extremely low budget production, and Hammer spent about the same or maybe a little more than they spent on their black and whites. If they could get some low cost film stock, they probably would. After all this started out as a black and white project.
You must log in or register to reply here. 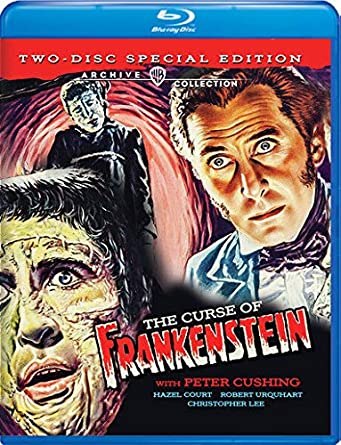