Mission: Impossible – Ghost Protocol, despite its slightly unwieldy full title, is a triumph of action adventure. A smart, full-tilt spy adventure with jaw-dropping stunts, unflinching pace, ample good humor (courtesy of Simon Pegg) and enough drama and twists to raise it healthily above other action adventure affairs. Tom Cruise and his fine ensemble cast travel the world with gadgets, fast cars, slick maneuvers and, under the confident guidance of director Brad Bird in his live-action feature film debut, easily deliver a romp of a good time.

The fourth mission undertaken by the Impossible Mission Force (IMF) finds Ethan Hunt (Tom Cruise) and his team, Benji Dunn (Simon Pegg) and Jane Carter (Paula Patton), running down a rogue Russian threat seeking to strike the United States armed with the recently stolen Russian Nuclear launch codes. An early plan to thwart the terrorists by infiltrating the Kremlin ends in disaster when the Kremlin is destroyed and Ethan and team are implicated. With the entire IMF disavowed, Ethan and team are joined by William Brandt (Jeremy Renner) as they travel across the globe to take down the threat and clear the IMF name.

Tom Cruise enjoyed a revival of popularity with this film having experienced a dulling of his star with the disappointing box office results of both Knight and Day and the relatively underwhelming reception of Mission: Impossible III. Cruise demonstrates a physical daring and a continuing firm grip on his Hunt character. He has always brought intensity to his action films, providing gravity and drama to even the pulpiest of action-adventure movies, and Ghost Protocol is no different. This adventure gives more time to Cruise’s fellow cast than previous films in the series, and it works well. The full cast is uniformly excellent. Jeremy Renner as Brandt brings a taut energy and serious, yet likeable quality, well suited for this series. Paula Patton portrays Jane, a character teetering on the edge of vengeance, and performs well here, but it is Simon Pegg shining brightest as comedic relief. In an expanded role from his first turn in M: I III, Pegg is given more space to use his superb timing and highly expressive face to provide the tensest of sequences a wonderful counterbalance of light humor.

The stunt and action sequences are flawless. Outside of Cruise and team trying to top them in the following installments, they are some of the very best put to film in years. Eschewing visual effects trickery for real stunt work, they naturally offer a tangible quality. This is particularly true of the Burj Khalifa sequence in Dubai as Cruise performs his own stunts, dangling outside the world’s tallest building in one of the most suspenseful and thrilling stunt sequences I can recall. Director Brad Bird has an exquisite sense of choreography as the opening sequences in Budapest and the Russian prison demonstrate. Bird has a defined visual sensibility crafted from his superb work in animated films. His The Iron Giant is a masterful blend of heart and story, and his, The Incredibles, is in many ways an espionage film wrapped in a superhero tale.

The visual effects courtesy of Industrial Light & Magic are mostly seamless to the in-frame effects, though the destruction of the Kremlin (and other smoke/cloud effects) seem a little more ‘cartoon-like’ than photorealistic. Still, most of the effects work is so well blended that you simply don’t notice it. Finally, the score by Michael Giacchino, with whom Bird worked on The Incredibles, Tomorrowland, and recently, Incredibles 2, is great fun. Giacchino expands upon his themes in M:I III with more playful and pounding music that work well as a standalone soundtrack listen, too.

Mission: Impossible – Ghost Protocol is wonderful entertainment. The decision to remove the IMF operatives from their relative comfort zones (having them cut off from IMF’s resources and operating outside of the ‘law’ as it were) will remind many fans of the first film, but besides the ‘rogue agent’ flavor, Ghost Protocol doesn’t resemble director Brian DePalma’s outing at the helm at all. Rather, here we explore more broadly and adventurously agents working with limited resources and against a timeline and the results are an absolute winner.

An already glorious Blu-ray release shines even brighter in this UHD release from Paramount.
The level of detail was terrific on the Blu-ray, but it’s edged here. Take a look at the grit and grime on Tom Cruise’s face during the opening prison sequence, or as he scales the Burj. Fabrics are very finely detailed, skin tones are very warm, rich, and the overall color palette of the production favors the warm tones, with yellows and softer reds, showing off particularly well.

The HDR10 and Dolby Vision grading give the colors a more deeply saturated look. One scene that really shows off the brilliance of the colors with the grading is when the team arrives in a white Land Rover to meet Ethan Hunt disembarking a white private yet. Another is the shot over the sands in Dubai. Brilliant colors that pop without being exaggerated. The Mumbai sequence, set at night as our heroes navigate through the city, is filled with exquisite contrast, deep, flawless blacks, beautiful electric blues (from the lights of the very expensive car they are driving). Then, as they attempt to save the day, the bright yellow electrical wires are alive with color.

Where this release is greatest is in the magnificent colors and the textural, filmic look. While several sequences were filmed in the high-quality IMAX format, disappointingly the shifting ratios of the theatrical experience are not recreated here. That would be on the only missed opportunity for the video.

The English 7.1 Dolby TrueHD audio is outstanding. A brilliantly mixed and balanced audio that spreads the surround effects with precision and is deep and bellowing in all the right places. Dialogue in the center channel is perfectly balanced with the action. Michael Giacchino’s score drives a great deal of the overall audio and is enveloping. The action sequences – particularly the chase through Dubai and the sandstorm – are full and draw the audience in to the fun onscreen. A flawless audio experience!

Mission Accepted (48:04) (HD): This set of behind the scenes extras covers everything from shooting in the Czech Republic to filming in Dubai and, through interviews with Director Brad Bird, Tom Cruise and others, delivers a fascinating peak into the filmmaking process.

– Suiting Up In Prague*

– Heating Up In Dubai

Impossible Missions (50:44) (HD): Another superbly produced set of extras covering a great deal of ground. Of particular note are the sections ‘Shooting in IMAX® and Composer. It is interesting to see and hear how invested and on-form Tom Cruise is behind the scenes on these features. Brad Bird and Tom Cruise clearly were able to develop a strong collaborative relationship. I can see these two working together again – mostly likely not on a M:I film, but at some point in their careers.

– Stepping into the Storm*

Deleted Scenes with optional commentary by director Brad Bird (15:02) (HD): I recommend watching these with the optional commentary. Presented here are 8 deleted scenes, including an alternate opening, which to varying degrees add a hair more to existing moments in the film. With a 132-minute running time, these scenes–though not all cut for time–were wisely excised from the final product.

Mission: Impossible – Ghost Protocol is highly entertaining. A globetrotting adventure filled with fun, flair and fantastic stunt and action sequences that raise the bar (a bar the sequels in the series work hard to beat). Each film in the Mission: Impossible franchise had employed a different director at the helm; something had Bird stated was one of the franchises strong points, and Bird appears to have helped breath an increased sense of vitality into the series. We know, of course that the fifth and sixth films would both be directed by Christopher McQuarrie. However, up to this point, each film had come with a different tone though this fourth entry shares a good deal of DNA with Director J.J. Abrams third outing. An outstanding UHD disc makes this release easy to recommend.

Thanks for the review. Left a little confused though on whether the aspect ratio shifts or not.

Love this film! Thanks for all of your UHD reviews of the Mission Impossible films!!
Reactions: Neil Middlemiss

Mike2001 said:
Thanks for the review. Left a little confused though on whether the aspect ratio shifts or not.
Click to expand...

Sorry. I missed out a couple of key words.

It does not and I've edited my review to clarify.
Last edited: Jun 25, 2018
Reactions: Osato

Yes. Clearly after a long day watching and writing, I should have just gone to bed and posted this in the morning.

I've given the special features the correct score from the default now.
Reactions: Osato

Neil Middlemiss said:
Clearly after a long day watching and writing, I should have just gone to bed and posted this in the morning.
Click to expand...

"We know, of course that the fifth and sixth films would both be directed by Joe Kraemer."

Both films are directed by Christopher McQuarrie.
Reactions: Osato and Neil Middlemiss

"We know, of course that the fifth and sixth films would both be directed by Joe Kraemer."

Both films are directed by Christopher McQuarrie.
Click to expand...

LOL - I had been listening to Kraemer's score for Rogue Nation while writing this last night. Clearly in my head the man had done more for the movies than just that one score (which was incredible) .

Neil Middlemiss said:
LOL - I had been listening to Kraemer's score for Rogue Nation while writing this last night. Clearly in my head the man had done more for the movies than just that one score (which was incredible) . 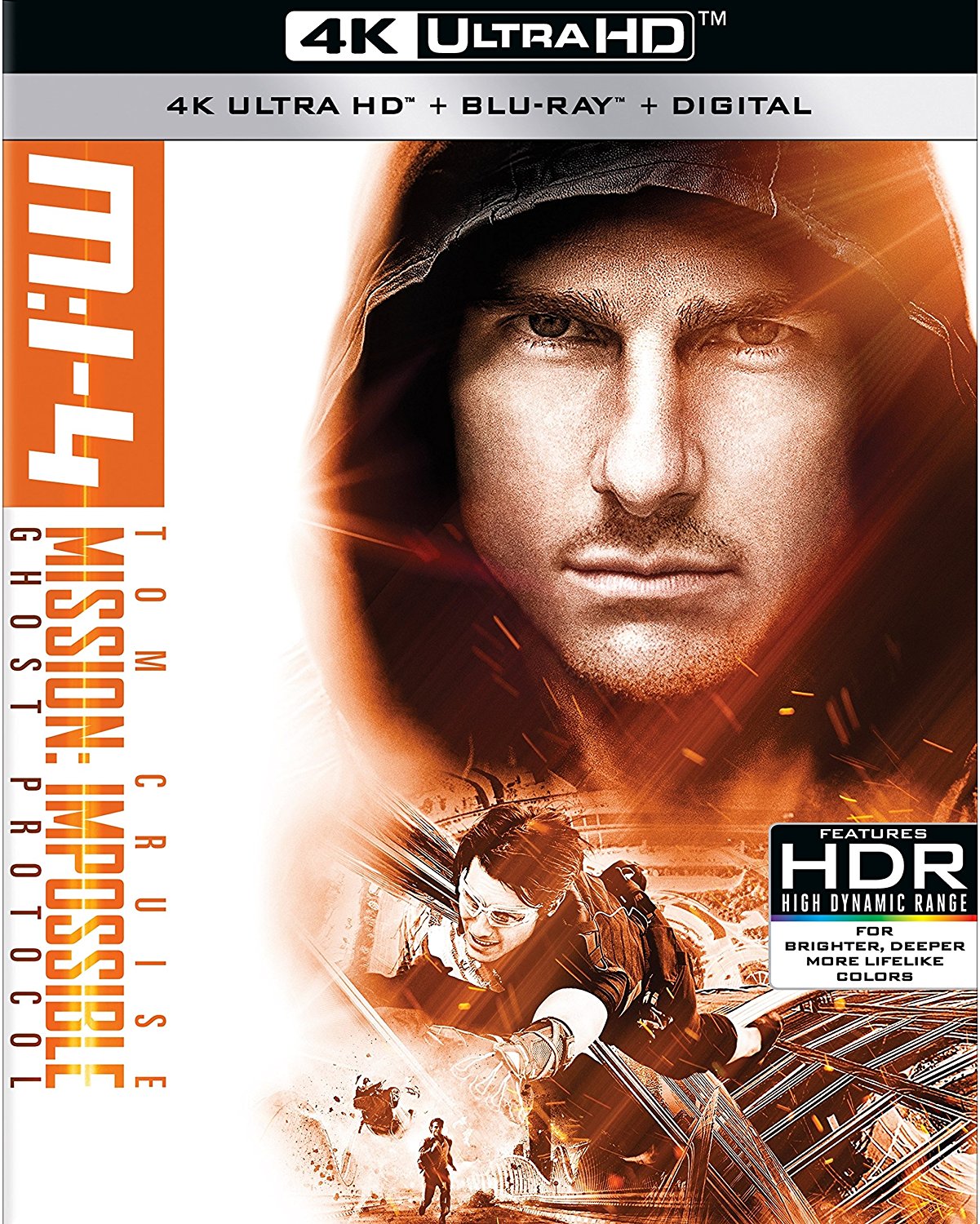