Posted on June 24, 2018 by Neil Middlemiss
The Mission: Impossible series gets back on track in this intense outing 4.5 Stars

Mission: Impossible III is the lowest grossing entry in the franchise, but it is perhaps one of the most important. After the critical disappointment of the second entry, six years would pass before J.J. Abrams, hot from his spy-story chops in the television series Alias, would make his feature film debut with this third outing. This is an excellent example of getting a series back on track, with the most serious tone and dramatic heft of the series, edging the serious-minding first entry back in 1996.

Even with its serious mind, M: I III offers plenty of lighter moments, including adding Simon Pegg to the cast as the clear comic relief. A well-made film that displayed director Abrams abilities behind the camera on large productions, and his command of characters and their importance within the spectacle that comes with these expensive action thriller.

The third film in this series is directed by JJ Abrams, a man destined to direct a Mission: Impossible film following his success as creator of the TV shows Alias and LOST. Using every inch of his spy-game techniques accumulated from his hit TV series, Alias, he navigates the story–which is neither too complex nor too simple – with great skill. Abrams constructs moments of genuine tension and surprising intensity without sacrificing the fun and thrills. Throughout, character moments that many films forgo or fail to provide properly, are woven well into the story.

Tom Cruise returns as Ethan Hunt who has given up the danger of operations for the quiet but equally secretive role of instructor at the IMF. Now engaged to marry Julia (Michelle Monaghan), he struggles with the burden of his secret life, but relishes his role out of the field. When the first agent he certified is captured on a failed mission (played by Keri Russell), he agrees to lead the rescue team, pulling him into active duty and threatening to unravel the somewhat normal life he has been building. Things do not go as they should, and it becomes apparent that the villain involved may be planning something catastrophic. Hunt, and a small group of operatives he knows he can trust, works to find out what, and who, is behind it all.

Mission: Impossible III is the most dramatically compelling of the series, driven largely by Cruise’s interactions with his fiancée, Michelle Monaghan, which feel genuine and help anchor the film in a drama not felt since moments in the first film. Perhaps it is the more character-centric story, or maybe Cruise maturing as an actor, but he imbues M:I III with a passion and dramatic intensity that ultimately enhance the adventure nicely.

The cast is a strong one with Ving Rhames returning once again as Luther Stickell.  Rhames is always highly capable, fun and unambiguously likable. Between Rhames and new addition to the series, Simon Pegg, provide some much needed comedic counter-balance to the films more intense tone. Pegg was such a good addition that he has appeared in each of the subsequent films. The beautiful and talented Maggie Q and impressive Jonathan Rhys-Meyers make up the rest of Hunt’s team.

Fresh from his magnificent Oscar-winning performance as ‘Capote’, the late Phillip Seymour-Hoffman was cast as the film’s notorious arms dealer, Davian, and he is frighteningly effective. The only ripples in his terrifically precise and scary performance are the occasional cringes we have at a few all too typical ‘villain’ lines, but with Hoffman’s intense delivery, they are forgivable. The always impressive Laurence Fishburne makes an appearance as an uptight Intelligence director, and the effective Billy Crudup plays operations director John Musgrave

For my money, Mission: Impossible III is one of the best in the series, and the most pivotal. With a meaningful story, and characters and their journey’s front and center, the movies exciting action sequences have much more weight and consequence. The film also features some excellent sequences, such as the bridge attack, and I think marked a turning point, and template for the future successes of the franchise.

Mission: Impossible III on Blu-ray came with a very good image, but the UHD takes that strong foundation and delivers worthwhile enhancements. There is an uptick in details, with close-up shots showing off skin pores and blood, dirt and debris caked on faces with sublime detail. The film’s grain is unblemished, and the color choices offer starker contrasts than the previous entries.

Blacks are incredible deep, reds precise without bleeding, whites are sharp without blooming, and the heavy blue-hues found throughout are clean, crisp, and precise as well. Flesh tones are warmer and richer, thanks to the HDR10 and Dolby Vision grading available. Of the series, M: I III has the most intense colors, and that makes the HDR (I watched this with Dolby Vision) positively a standout. Given Abram’s stylistic color and lensing choices in his films, I suspect his work will benefit enormously from High Dynamic Range. It certainly does here.

The third entry has always succeeded in the audio department. Now, with the Dolby TrueHD 5.1 lossless option, the audio is an even more aggressive delivery of the great sound design, featuring helicopter and car chases that pinball in the surrounds nicely, and a score by Michael Giacchino that channels his Alias days. There is a welcome crash, bang and wallop delivered faithfully by the audio, with a very good sense of precision in the sounds effects and in the instrumentation used on Giacchino’s score. A Dolby Atmos track would be the ultimate, but what’s here is still very, very good.

Check out my interview with composer Michael Giacchino where we briefly discuss his Mission: Impossible scores.

There are no special features on the UHD disc, but the included Blu-ray’s retain the extras from previous releases (the Extreme Blu-ray Trilogy only had a single special feature). The audio commentary by J.J. Abrams and Tom Cruise is genuinely a very interested commentary track, and the rest of the supplements reasonably enlightening, though are a mix of standard and high definition (a common practice at the time of the film’s original home video release).

Mission: Impossible III was a turning point for the series. Steadying the ship, as it were, after the miscalculation of the second installment, it offered a far better sense of character and drama without sacrificing the fun and spectacle of action. Director J.J. Abrams was able to show the world that he could deliver engaging, entertaining spectacle cinema, and this film introduced Simon Pegg’s popular Benji character. Michael Giacchino returned the scoring back to a more appropriate spy styling, filled with themes and a loving embrace of Lalo Schifrin’s legendary theme.

Paramount’s UHD release of the film is the very best this film has looked and sounded at home and it belongs on the shelf of fans and UHD enthusiasts alike. 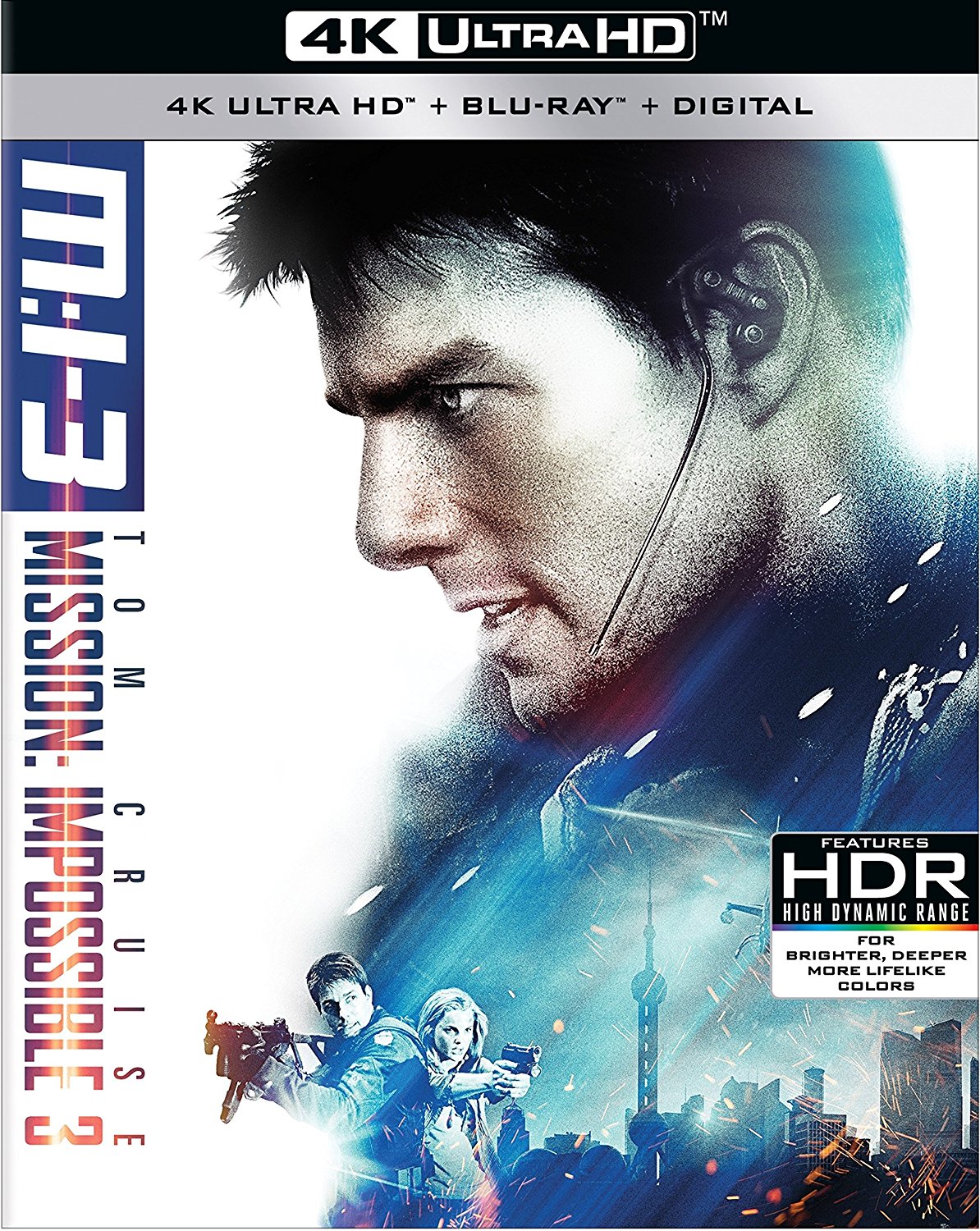