Forum List What's new Dark Style Change width
Log in Register
What's new Search
Menu
Log in
Register
Navigation
Install the app
More options
Dark Style
Close Menu
Posted on May 31, 2020 by t1g3r5fan
You are using an out of date browser. It may not display this or other websites correctly.
You should upgrade or use an alternative browser.
Noir flavored western debuts on Blu-ray 3.5 Stars

When talking about Universal’s science fiction films of the 1950’s, the name of director Jack Arnold gets frequently mentioned. However, Arnold was known for dabbling in other genres as well, like comedies and westerns. A notable example in the latter is Man in the Shadow, which does have some tinges of film noir mixed in. Universal previously released the movie on both DVD and MOD, but Kino has licensed the film of its Blu-ray debut.

In the cattle ranching town of Spurline, Virgil Renchler (Orson Welles) looms large as the owner of the Golden Empire ranch and – essentially – the kingmaker of the town. However, when a young laborer on the ranch is beaten to death by a couple of Renchler’s ranch hands, the newly elected sheriff Ben Sadler (Jeff Chandler) investigates. Sadler is met with stonewalling by Renchler and resistance from the townspeople, fearful of their futures if Golden Empire pulls out of town; nevertheless, Sadler pushes forward, determined to see justice done, regardless of the risk to his life for doing so.

While technically a western, Man in the Shadow (AKA Pay the Devil) does have more going on beneath its surface. First of all, there’s some hints of film noir present, especially in the way the film is lit and staged during some key scenes. Secondly, the mention of immigrant laborers and their treatment was very daring during its time and even more relevant today; another movie during the 1950’s that even dared to directly confront this issue was Joseph Losey’s underrated and overlooked The Lawless (1950). Finally, the plot’s central point of one man standing up for what’s right against overwhelming odds – best used during this time in the classic High Noon (1952) – is turned on its head, especially when the entire town wants Sadler to let it go in order to protect the proverbial golden eggs coming into town from the nearby ranch; further credence is established when the town watches helplessly as Sadler is dragged through town by the ranch hands for pushing forward with the investigation. When all these elements are put together, Man in the Shadow doesn’t emerge as a typical western – it’s one of the more thought provoking films of this ilk, rivaled by Jack Arnold’s equally intriguing and underrated No Name on the Bullet (1959).

In what would be his last film under the exclusive deal he signed with Universal-International, Jeff Chandler is a strong lead as the determined and principled Ben Sadler; it would be one of his best parts during his time with the studio. As the rancher who rules more like a despot, Orson Welles has one of his best acting roles during the decade, outside of his crooked Captain Quinlan in his masterpiece of noir, Touch of Evil; it was his first western and he also made uncredited contributions to the script. Colleen Miller makes a solid appearance as Renchler’s headstrong daughter, while John Larch and Leo Gordon bring the heavy factor as the murderous ranch hands. Rounding out the supporting cast here are Ben Alexander as Sadler’s prejudiced deputy, Barbara Lawrence as Sadler’s wife, Paul Fix and William Schallert as two of the townspeople wanting Sadler to stop his investigation, Martin Garralaga as the lone witness to the murder, Royal Dano as a friend of the witness who plays a big part in the climax, Mario Siletti as the town barber, Joe Schneider as the ill fated ranch hand, and Mort Mills (the creepy CHP officer in Alfred Hitchcock’s Psycho) as the ranch gateman.

The film is presented in its original CinemaScope ratio of 2:35:1 for this release. Film grain is organic, with fine details rendered faithfully and the gray scale also getting a faithful representation as well. Issues like scratches, tears, and dirt are fairly minor here, which makes this likely the best the movie will ever look on home video.

The film’s original mono soundtrack is presented on a DTS-HD Master Audio track for this release. The sound mix and dialogue is both strong and clear; the music (composed by an uncredited combination of Hans J. Salter and Herman Stein, with stock music by Henry Mancini) is also clear with fidelity and strength without being too overpowering. Problems like distortion, cracking or hissing are very minor here, which means that this is likely the best the movie will ever sound on home video.

Commentary by film historian Troy Howarth – Recorded for this release, Howarth goes over some of the production details, as well as some of the cast and crew members, particularly Orson Welles around this time.

While it was successful with audiences upon first release and got some solid notices from critics, Man in the Shadow has fallen off the radar despite its potent and intriguing blend of western and noir elements. Kino’s solid Blu-ray release should aid in rediscovery, with high marks in picture and audio quality in addition to an informative commentary track for a bonus feature. Highly recommended and worthy of an upgrade from the DVD and MOD.

Is that film score 1 out of 5 a mistake as I always thought this was a pretty good movie? By the way, I need to watch my Blu-ray.

Robert Crawford said:
Is that film score 1 out of 5 a mistake as I always thought this was a pretty good movie? By the way, I need to watch my Blu-ray.

It was, I just fixed it. Either I had forgotten to to rate it or my initial rating changed when I was scrolling on the page during editing; I'm inclined to think the latter.

Colleen Miller Ralphs has been a dear friend for over 20 years, and I've always wished she'd stuck with acting. "How could you turn down a Douglas Sirk film?" I'd holler, and she'd just smile and reply, "What can I say? I was in love." We screened SHADOW at the American Cinematheque some years ago, and during our Q&A I jokingly asked if Chandler had ever asked to try on her dresses. After the laughter died down, she just looked at me and deadpanned, "You're silly." (What can I say? She's right.)
You must log in or register to reply here. 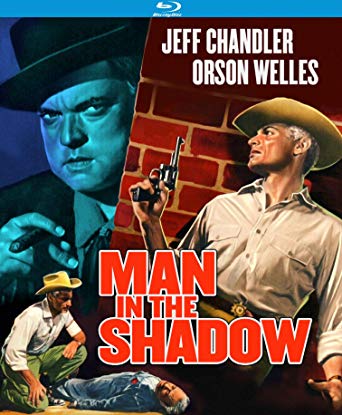