As one of the most decorated soldiers of any member of the American armed forces who served during WWII, Audie Murphy took an unlikely path to Hollywood. First signed by James Cagney’s independent film company shortly after the war (but not debuting until 1948 – by then no longer associated with Cagney), it wouldn’t be until his performance in John Huston’s adaptation of The Red Badge of Courage (1951) that helped to really put him on the map. However, much of his career was spent at Universal-International, where he made a name for himself in several westerns; three of them – The Duel at Silver Creek, Ride a Crooked Trail and No Name on the Bullet – are presented here by Kino Lorber in this collection for the first time on Blu-ray.

When a marauding group of claim jumpers swindle and murder local prospectors, Silver City marshal Lightning Tyrone (Stephen McNally) becomes determined to track down the group and bring them to justice. However, when his trigger finger is paralyzed in a shootout, it becomes clear that he won’t be able to do it alone; he deputizes the equally sharp shooting Silver Kid, whose father was one of the victims of the murderous gang. Soon, the two will find themselves at odds, especially when Lightning falls for a woman (Faith Domergue) who may have a connection to the gang; can Lightning and Silver settle their differences before the gang can get away with more than murder?

As one of the earliest entries in the career of director Don Siegel, The Duel at Silver Creek is a straightforward little western that often hits the mark. As for Audie Murphy, he was really starting to grow into his stardom here, playing one of the many sharpshooters that had ‘Kid’ in his name; it was a trait that occurred in a few of his movies following this one, most notably in Night Passage (1957). He holds his own against Stephen McNally – who rivals Murphy here in getting the bulk of the screen time – as well as Faith Domergue, Susan Cabot (the Wasp Woman herself!), Gerald Mohr, Eugene Iglesias, James Anderson and a young Lee Marvin in one of his earliest film appearances. Moving along a quick clip – much like Lightning and the Silver Kid’s quick draws – without lagging in interest, The Duel at Silver Creek is a thoroughly entertaining western that has garnered some attention over the years (most notably, Quentin Tarantino has spoken about it in a recent review for one of Siegel’s westerns – the John Wayne starring The Shootist).

After a chase that ends with the pursuing marshal accidentally falling to his death, outlaw Joe Maybe assumes the dead man’s identity and rides into the tough river town of Webb City. There, Judge Kyle (Walter Matthau) takes a liking to him and appoints him the sheriff; however, Maybe begins to use his position as a cover to rob the local bank. Things further get complicated when a former flame (Gia Scala) and a rival outlaw (Henry Silva) also arrive in town, both further entangling Maybe in a web of deception; can Maybe extract himself and pull off the robbery or will his newfound position finally compel him to go straight?

Jesse Hibbs, a former college football player at USC who followed fellow teammate John Wayne into Hollywood, worked with Audie Murphy as a director on six films; Ride a Crooked Trail was their last collaboration (and Hibbs’ last film overall) and likely their most entertaining. As Joe Maybe, Murphy gets a chance to send up his on-screen persona a bit with some light humor mixed into the proceedings as well as returning him to comfortable; his previous film, Joe Butterfly (1957), tried to put him into a full fledged comedy with mixed results overall. Among those backing up Murphy here include Walter Matthau (in an early role), Gia Scala, Henry Silva, Mary Field, Leo Gordon and Mort Mills; most, if not all, would go on to more notable parts in film and TV. With a plot filled with twists and turns livened up with a comedic touch, Ride a Crooked Trail is certainly an engaging little western that gave Murphy a nice change of pace role in a career filled with many westerns.

Notorious hired gun John Gant rides into Lordsburg, Arizona and checks into the local hotel for his latest assignment. When word of Gant’s presence travels through town, several citizens are convinced that Gant is there for them and either try to pay him off or openly confront him to leave town. Gant isn’t easily swayed and fear soon grips the town as the local doctor (Charles Drake) tries to understand the infamous gunslinger; soon, it becomes clear that the name on Gant’s bullet is someone that nobody expected…

Of all the westerns he made over his career, No Name on the Bullet may have given Audie Murphy the best role of his career. Responding to the taut direction of Jack Arnold (who was also given one of his best films here too) and the engrossing script of Gene L. Coon, Murphy’s Gant is one of the most intriguing characters in the western genre of the 1950’s; he’s a contract killer who can espouse some philosophical wisdom and doesn’t just kill for the sake of killing. Murphy is also given plum support by the likes of Charles Drake, R.G. Armstrong, Willis Bouchey, Joan Evans, Warren Stevens, Whit Bissell, Karl Swenson and Edgar Stehli. Mixing in some religious undercurrents with a dose of Cold War style paranoia into the tried and true formula of the genre, No Name on the Bullet is one of the most underrated westerns of the decade, one that’s ripe for rediscovery and reappraisal as a hidden gem.

All three films’ original mono soundtracks are presented on DTS-HD Master Audio tracks for this release. Dialogue on each is strong and clear, with sound effects and music each given a faithful representation and presentation. Problems like distortion, crackling and hissing are minimal to nonexistent here, which means that all three movies have likely been given their best audio presentation on home video.

The Duel at Silver Creek

Commentary by film historian Toby Roan – Recorded for this release, Roan gives us plenty of background information on the movie and its cast.

Commentary by film historian Toby Roan – Also recorded for this release, Roan again provides background info on the movie and its cast and crew, although some of the info on Audie Murphy overlaps with Duel‘s commentary.

No Name on the Bullet

Commentary by film historians/filmmakers Steve Mitchell & Gary Gerani – The last of the newly recorded commentaries has Mitchell and Gerani going over some of the themes of the movie as well as the usual info on the cast and crew.

Audie Murphy may have been a minor star in westerns, but The Duel at Silver Creek, Ride a Crooked Trail and No Name on the Bullet provided him with three of his more notable movies and roles in his career. Kino has brought all three movies to Blu-ray with solid HD transfers and three very good commentary tracks to go with them. Highly recommended and worth upgrading from previous DVD releases (The Duel at Silver Creek and No Name on the Bullet were previously released by Universal while Ride a Crooked Trail was part of a TCM Vault Collection set of Audie Murphy westerns).

Hmmm. I have all these films on adequate DVDs and your review doesn't suggest these Blu-ray discs are a big upgrade. I'll have another viewing of my DVDs before deciding.

Thanks for the review, anyway.

Robin9 said:
Hmmm. I have all these films on adequate DVDs and your review doesn't suggest these Blu-ray discs are a big upgrade. I'll have another viewing of my DVDs before deciding.

I read the same review and came away with a different interpretation. I watched all of those movies in their entirety on BD, when this box was first released back in August and thought they look quite a bit better than the DVDs they replaced. Anyhow, that's my take.
Reactions: Randy Korstick, RBailey and lark144 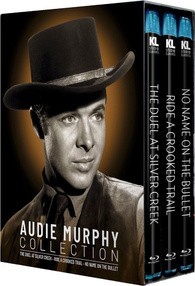