Forum List What's new Dark Style Change width
Log in Register
What's new Search
Menu
Log in
Register
Navigation
Install the app
More options
Dark Style
Close Menu
Posted on December 26, 2018 by t1g3r5fan
You are using an out of date browser. It may not display this or other websites correctly.
You should upgrade or use an alternative browser.
Final 3-strip Technicolor movie revived on Blu-ray 3.5 Stars

At a time when most studios had adapted more cost effective means for shooting movies in color, FoxFire represented the end of an era for the three-strip Technicolor process, as it was the last movie to be both shot and released in that format in Hollywood history. Long unavailable on home video, Kino has resurrected this rarity through its Studio Classics line.

While on vacation in Arizona, well-to-do socialite Amanda Lawrence (Jane Russell) meets mining engineer Jonathan “Dart” Dartland (Jeff Chandler) after her car breaks down on a stretch of highway. The two quickly fall in love and marry, much to the shock and chagrin of Amanda’s mother (Freida Inescort). However, when the couple move into the mining town of Lodestone, the honeymoon period ends when Amanda learns more of Dart’s background and becomes the target of some nasty gossip involving her and the mining company’s doctor (and Dart’s friend) Hugh Slater (Dan Duryea). The problems are only complicated by Dart’s obsessive search for a legendary vein of gold in one of the mine’s shafts.

On the surface it looks like a typical soap opera, but FoxFire actually goes a little deeper than one would expect from a romantic drama of this type. While the movie deviates from Anya Seton’s bestselling novel (which had the setting in the Prohibition and Grest Depression era) in an attempt to make it modern and accessible to audiences, it also touches upon some subjects that were considered risque for audiences at the time – interracial marriage, miscarriages, attitudes towards Indians. Although he was no Douglas Sirk – Universal-International’s leading director of sophisticated and subversive melodramas at the time – director Joseph Pevney lends a steady hand and degree of style to the proceedings that holds interest throughout it’s hour and half running time. While some aspects of the drama have undeniably dated over time, FoxFire is nonetheless a very solid little romance and a fitting coda to the three-strip Technicolor era of filmmaking.

As Amanda, Jane Russell brings her dynamic presence to one of her best roles; the part is definitely tailored to her strengths and gives her a chance to play a more substantial part compared to the usual bombshell roles she had received in the past. Jeff Chandler, also deviating from his typical “exotic” persona, is also given the chance to prove his worth in a substantial romantic part and does so very well; the film largely works because of the chemistry between Russell and himself, and also shows off some other interesting talents – he not only wrote the lyrics to the title song played during the opening credits (composed by Henry Mancini), but also sings it as well! Also breaking away from his typical on-screen persona as a heavy is Dan Duryea, who casts a memorable impression as the alcoholic doctor who becomes a third wheel in this tumultuous romance. Among those ably supporting this strong trio are Freida Inescort as Amanda’s mother, Mara Corday as the mining company nurse, Barton MacLane as the mine foreman, Charlotte Wynters as the foreman’s busybody wife, Robert F. Simon as the mining company’s reluctant owner, Robert Bice as another friend of Dart’s – the interestingly named Walt Whiteman (perhaps an allusion to the famed poet), and Celia Lovsky as Dart’s mother.

The original 2:00:1 aspect ratio is intact in this new HD transfer of the movie, capturing much of its original Techincolor glory. The only noticeable registration issue is mostly on the right side of the screen and some scenes appear a little softer than others. Overall though, film grain is largely kept intact with much of the saturated hues Technicolor is known for being strongly vivid and organic. There are some instances of age related artifacts like speckling, dirt, or dust, but not a whole lot. For a film that had never seen the light of home video until now, the visual presentation is quite strong.

The original mono soundtrack is presented on a 2.0 DTS-HD Master Audio track. The dialogue clear and strong throughout, with some ambiance and fidelity given to longtime Universal composer Frank Skinner’s score as well as the Henry Mancini composed title tune. Instances of age related artifacts like crackling, popping, or hissing are very few. Again, probably the best the film will ever sound on home video.

Commentary by Kat Ellinger – The author combs over some of the production details as well as some of the differences between the film and the source material in this informative commentary track. Compared to a track on a previous KLSC release – Smashing Time – that I reviewed, Ellinger is a little more organized with her information on this one.

Notable as a footnote in the history of Technicolor, FoxFire emerges not only for being the last movie filmed in three-strip Technicolor, but for being a very solid little drama as well. Kino has done a great job in rescuing this movie from relative obscurity and giving it a strong visual and audio presentation for its home video debut. Fans of the stars as well as lovers of classic Technicolor movies would be well advised to pick this one up for their respective collections.

I watched it last night. My picture score is 4/5. I thought it was quite nice. I have seen the movie many times but always enjoy it.
You must log in or register to reply here. 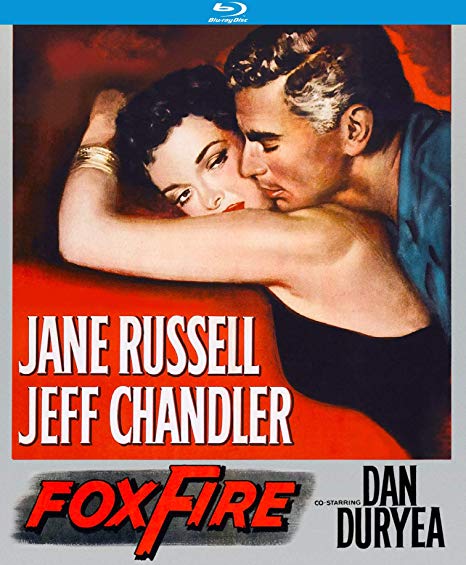