Forum List What's new Dark Style Change width
Log in Register
What's new Search
Menu
Log in
Register
Navigation
Install the app
More options
Dark Style
Close Menu
Posted on December 21, 2018 by Matt Hough
You are using an out of date browser. It may not display this or other websites correctly.
You should upgrade or use an alternative browser.
1950s melodrama looks better than ever. 3.5 Stars

Joan Crawford fans are sure to be ecstatic that another of her 1950s melodramas, Joseph Pevney’s Female on the Beach, has finally arrived in high definition.

Joan Crawford fans are sure to be ecstatic that another of her 1950s melodramas, Joseph Pevney’s Female on the Beach, has finally arrived in high definition. It’s Joan in her late career prime even if the script has major inconsistencies and flaws in dramatic construction. Those kinds of things won’t matter to a fan base who will revel in her pithy dialogue, glamorous wardrobe, and lush surroundings. A first-rate supporting cast also works well with the star who takes full advantage of her every opportunity to be snarky, express joy, play desperation, and even do a credible drunk act.

Vegas widow Mrs. Lynn Markham (Joan Crawford) picks an inopportune time to return to claim her beachfront home. The night before, her tenant Eloise Crandall (Judith Evelyn) had drunkenly tumbled from a balcony to her death below under mysterious circumstances. Though real estate agent Amy Rawlinson (Jan Sterling) bends over backwards to hide the circumstances of Mrs. Crandall’s seesaw occupancy of the property, what really raises Mrs. Markham’s eyebrows is the overfamiliarity of neighboring beachcomber Drummond Hall (Jeff Chandler) to enter and leave her home at will and the unctuous friendliness of the next door neighbors the Sorensons (Cecil Kellaway, Natalie Schafer) who do everything in their power to ingratiate themselves into Lynn’s life. But there is something alluring about the charming beachboy, and Lynn begins to find his company not unpleasant until the local police lieutenant (Charles McGraw) begins to suggest that Eloise Crandall’s death might have been murder and that Drummond was the last person to see her alive.

Playwright Robert Hill has adapted his play The Besieged Heart with Richard Alan Simmons for the movie’s screenplay, and while the mystery is decent, and the set-up for it is pretty surprising for a film made under the strict Production Code guidelines at play in 1955 (the Sorensons are pimps who use their protégé Drummy to hook rich older women and bilk them for their money; Eloise Crandall had forked over $3,680 in loans and gambling debts to the nefarious duo in exchange for time spent with the hunky boy toy), the development of Joan Crawford’s Lynn Markham is very different from the play and not especially well constructed. She admits she was a Vegas showgirl who married a wealthy man who had just died (Joan was 51 at the time of filming), but that more than anything she longs for privacy and to be alone. And yet, not one day into her stay at this luxurious beach house, she’s bored, tossing hastily scanned magazines around the dwelling and having seemingly no interests or hobbies thus intensifying her loneliness and making her, like Eloise Crandall, susceptible to Drummy’s considerable physical charms. As tough talking and fully aware of the Sorensons’ game as she is (and having found Crandall’s diary also fully aware of how she went from a secure woman to an emotional wreck), she still within days is herself a drunken mess having tasted briefly Drummy’s kisses and then begins hopelessly waiting by the phone for three days for the slightest sign of encouragement from him. The character simply doesn’t convince us that she’s either tough or vulnerable and seems merely weak and silly. Joseph Pevney directs the film with surety and makes the most of Universal’s cost-cutting budgets (rear projections that aren’t very convincing, location beach shots that don’t match soundstage sets always credibly). The revelation of the mystery isn’t milked for quite the amount of suspense and surprise that it might have showcased either.

But never let it be said that Joan Crawford isn’t every inch a star in this vehicle. She takes several opportunities to show off her still trim and svelte legs, and the Sheila O’Brien wardrobe is quite extensive and fits Joan like a glove. While she’s supposed to be a showgirl, Joan affects a rather posh accent in the first third of the film belying her humble background, but she laughs, she cries, she snarks, and she panics with the best of them. Jeff Chandler who had previously had a romantic entanglement with Joan Crawford when she was between husbands displays great chemistry with the actress, and while his character only gets a few rather fleeting moments to provide backstory on his rather sad life, Chandler plays it believably. Jan Sterling takes full opportunity to display her acting range, too, being alternately pert and later biting in a drunken moment where she puts her cards on the table about her own feelings for Drummy. They may be playing procurers, but Natalie Schafer and Cecil Kellaway walk away with all of their scenes as the smarmy Sorensons.

The movie has been framed at its theatrical 2.00:1 aspect ratio (1080p resolution using the AVC codec) and is a much more enjoyable watch than Universal’s previous open matte DVD transfer. After some speckled artifacts during the opening credits, the image quality of the transfer is wonderfully sharp and clear with only a single slight scratch to mar its sheen. Grayscale is impressive with superb, sparkling whites and quite excellent black levels. The movie has been divided into 8 chapters.

The DTS-HD Master Audio 2.0 mono sound mix is marvelously clear and clean. There are no instances of hiss, crackle, hum, or pops. Dialogue is easily discernible throughout and has been mixed beautifully with the jazz-leaning background score and ocean sound effects.

Audio Commentary: two are available though neither always gives the kind of scholarly background information on the making of the movie that one might want. The better of the two is more gossipy in nature with David DeCoteau letting film historian and Joan Crawford fan David Del Valle have his head and talk extemporaneously. Film historian Kat Ellinger likewise talks freely without a script but without some of the same personal experiences with the participants that Del Valle enjoyed. Both, however, make mistakes here and there in their commentaries: for example, Del Valle calls Jan Sterling’s film Ace in the Hole wrongly A Hole in the Head and Ellinger mentions that Joan’s last husband ran Coca-Cola rather than its arch rival soft drink brand Pepsi.

Animated Image Gallery (15:45, HD): a marvelous array of posters, wardrobe tests, movie stills, studio portraits, and behind-the-scenes shots on the set about as extensive as any I have ever seen for a single film of this vintage.

Joseph Pevney’s Female on the Beach is one of Joan Crawford’s most well-known melodramas of the 1950s. While it didn’t bring her an Oscar nomination like Sudden Fear three years earlier had done, she plays her role to the hilt with the assurance and zest that she was known for in the business, and Universal’s new high definition transfer released by Kino Lorber will no doubt delight the actress’s many faithful fans.

Thanks for the review. This is the kind of movie I would have avoided like the plague but it sounds so nutty that I have to see it.

I know that Joan has many fans who will enjoy this, but alas, I am not one of them.

I get a real kick out this one. Can’t wait to upgrade my dvd.

JohnMor said:
I get a real kick out this one. Can’t wait to upgrade my dvd.
Click to expand...

The upgrade is well worth it. Seeing it properly framed really adds a great deal to enjoying what's unfolding before one's eyes; at least it did for me.

Although I've seen this movie many times, it wasn't until the Blu-Ray that I noticed Natalie Schafer's foo-foo dog in her purse. Definitely worth the upgrade if you enjoy this film.
C

This was great to finally see in the 2:00 aspect ratio. However, about 20 percent of the Blu-ray suffers from distracting texture noise in faces, walls, etc., none of which was present in the 4:3 DVD. Very disappointing in this regard.

RichMurphy said:
Although I've seen this movie many times, it wasn't until the Blu-Ray that I noticed Natalie Schafer's foo-foo dog in her purse. Definitely worth the upgrade if you enjoy this film.
Click to expand...

I will have to watch it again after the holidays to look for that. I don't remember seeing it as many times as I have watched this movie over the years.

Matt Hough said:
I will have to watch it again after the holidays to look for that. I don't remember seeing it as many times as I have watched this movie over the years.
Click to expand...

The scene on the beach, beginning about 17:12 on the Blu-Ray.

RichMurphy said:
The scene on the beach, beginning about 17:12 on the Blu-Ray.
Click to expand...

Disappointed to see that some dimwit in the transfer bay has pillarboxed the opening credits, despite the fact there is about a mile and half of room from the edges of the frame to either side of the credits.

Just read the DVD Beaver review and saw a screen capture of the scene in question. It seems appropriate that the future Mrs. Thurston Howell III would have a toy dog.

It looks like a new film. And it has one of the most hilarious and informative commentaries ever by David Del Valle. It's a lot of fun and very entertaining.

Rob W said:
Disappointed to see that some dimwit in the transfer bay has pillarboxed the opening credits, despite the fact there is about a mile and half of room from the edges of the frame to either side of the credits.
Click to expand...

I know, right? I sometimes think the only reason they do this is to show what the full frame looks like and to make you wonder if it is being cropped. But you're right, it could have been uniformly like the rest of the film.

Now that we have this, I wish some company would pick up Queen Bee from Sony and offer it on Blu-ray. I watched my DVD a week or so ago, and it would make a good companion piece to this, seeing as Joan plays in Queen Bee a completely despicable character who victimizes everyone around her.

What about a double feature of Craig's Wife with Rosalind Russell and Harriet Craig with Crawford?

I would love to have this double feature. I haven't seen either film in a long time.
You must log in or register to reply here. 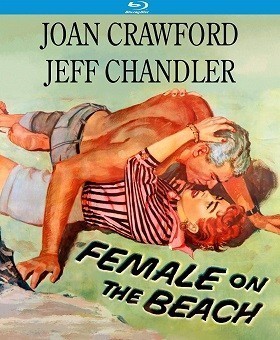