In this 1952 small scale drama about a babysitter who mistakes a fellow hotel occupant for her long-dead boyfriend, Marilyn Monroe and Richard Widmark both deliver outstanding performances which emphasize fragility and compassion over melodrama and spectacle.

Roy Baker’s 1952 production of Don’t Bother To Knock for Twentieth Century Fox is an effective little film, running a mere 76 minutes but managing to defy easy categorization. Though there are moments of humor and great suspense, at its heart, the film is a drama about two damaged souls trying to find their way back into a world that’s kept spinning regardless of their absences from it. One of the film’s greatest achievements is the layered characterizations of its two leads, which allows the audience the thrill of discovery as the film progresses.

The entire film is set at a fictional New York City hotel, The McKinley, where the bar singer Lyn Lesley (Anne Bancroft, in her first screen role) wonders whether her ex-boyfriend will make an appearance to respond to the ‘Dear John’ letter she’s sent him. The former boyfriend, a pilot named Jed Towers (Richard Widmark), is indeed at the hotel, trying to decide how to respond to the letter. After flying for the government during the war, Jed took a job as a pilot, but has grown cold in a life that he’s felt has been lacking in opportunity. It’s because of this coldness that Lyn has let him go; it’s not that she’s looking for a lifetime commitment, but just a sign that there was some feeling under the chilly exterior.

Meanwhile, hotel guests Peter and Ruth Jones (Jim Backus and Lurene Tuttle) need a babysitter for their young daughter Bunny (Donna Corcoran), as Mr. Jones is due to receive an award at a banquet being held downstairs. Eddie (Elisha Cook Jr.), the hotel’s elevator operator, has just the person for the job, and introduces the Joneses to his niece, Nell (Marilyn Monroe). Nell is initially shy and reserved, appearing free from even the smallest vice when she turns down Bunny’s offer to share some chocolate candies. But once Nell puts Bunny to sleep, the first cracks in the veneer appear.

Nell soon begins to rummage through Mrs. Jones’ possessions, trying on her fancy clothes and expensive jewelry. When she does this, though, it’s not with the maliciousness of a common thief, but with a childlike wonder, as if she’s trying to imagine herself as a different person in a different life. Checking in on her, Eddie is horrified to discover what Nell has been up to, and orders her to change back into her own outfit. Nell confesses that following the death of her boyfriend, she fears that she’ll never meet a man who will love her, take care of her, and shower her with nice things.  Nell rushes Eddie out the door, agreeing to his demands, but it becomes obvious that she’s merely paying him lip service.

Meanwhile, returning to his hotel room after an argument in the hotel bar with Lyn, Jed looks out his window to discover that Nell has the room opposite to him. Jed simply assumes that Nell is the high society girl she’s playing dress-up as. They catch each other’s sight in the window, and Jed uses the fire safety chart on the wall to determine which room number she’s in. After establishing a bit of a repartee, Nell invites Jed to come to her room. Jed initially thinks that the two will share some drinks and cynical conversation before heading to the bedroom, but soon realizes that the situation is not as clear cut as he had assumed.

Monroe and Widmark both excel in their roles. Monroe is mesmerizing from the moment she appears onscreen. It’s easy to sense that there’s something not quite right about her character, but she gives Nell layers upon layers, revealing the cracks in Nell’s armor in slow waves. As Jed, Widmark is equally good at first hiding and then slowly revealing the hidden sense of decency hiding under the character’s unfeeling exterior. Both manage to play against expectation but in an entirely believable way, so that while each twist and turn may come as a surprise, it never feels anything less than authentic.

Director Roy Ward Baker (credited here simply as Roy Baker), who began his career in England before making his way to Hollywood, expertly handles the actors and the story. Though the film was shot on soundstages on the Fox lot, the hotel setting is nonetheless convincing, without being confining. He’s clever with his use of the camera, alternating between coverage which can be disarmingly intimate, but also cleverly catching the small details that signal that the characters aren’t exactly who they portray themselves as being. The script, adapted by Daniel Taradash from Charlotte Armstrong’s novel, is a fantastic blend of well-written characterizations, tight structuring, and clever dialogue. Though the film makes no claim for being told in real time, it creates a very credible illusion that the events onscreen unfold as they happen without embellishment or editing. To the great credit of the actors onscreen and the writer and director offscreen, by the end of the film, the craft has become invisible.

Don’t Bother To Knock is presented in black & white in its original aspect ratio of 1.33:1 via the AVC codec. The transfer on this Twilight Time release, provided by Twentieth Century Fox, is absolutely gorgeous. The picture is perfectly clear and crisp, without a hint of damage or wear. Blacks are strong, with excellent shadow detail.

The soundtrack is presented in DTS-HD MA 2.0 mono (incorrectly labeled as 1.0 in the packaging) that is every bit the equal to the picture. Dialogue is well recorded and always easy to understand, and mixed well with Lionel Newman’s classy score. There are no issues with hiss or any other age-related artifacts.

Optional English SDH subtitles are also provided on the disc.

Marilyn Monroe: The Mortal Goddess (44:06, SD) – This episode of the A&E Biography series tells the now familiar story of Monroe’s triumphs and tragedies. This originally aired on the cable network in a version twice as long as what’s presented on disc here; as such, the shorter version here feels a bit rushed, going through Monroe’s career highlights without dedicating much time to any one project. Don’t Bother To Knock is briefly mentioned as an early career milestone for Monroe. A brief note: this edition appears to be taken from pre-broadcast elements; when the special discusses Monroe’s nude portraits, the photographs are shown uncensored.

Richard Widmark: Strength Of Characters (44:23, SD) – This A&E Biography story covers Widmark’s impressive career. Made about a decade before Widmark’s death, the notoriously private actor is interviewed on-camera and is instantly likable for his intelligence and warmth. Don’t Bother To Knock is briefly mentioned as an important role for Widmark, allowing him to subvert expectations by appearing as a character who ultimately turns out to be a kind and decent man, rather than as the heavy he was best known for playing at the beginning of his career.

Original Theatrical Trailer (02:41, SD) – The trailer, in reasonably decent condition, promotes Monroe both as a beautiful woman and a dramatic actor. Widmark narrates in character, and the trailer emphasizes the suspense of the film, making it appear as more of a noir than a character-based drama. Though it’s not the most accurate trailer, it does stir up some intrigue without revealing too much of the story.

Six Page Booklet – Julie Kirgo’s informative essay summarizes the film while also illuminating some of the behind-the-scenes difficulties that the filmmakers faced in working with Monroe. The booklet also contains production stills and a reproduction of the original poster art.

Don’t Bother To Knock is a small film which is disarmingly impressive, capturing actors Richard Widmark and Marilyn Monroe in early career peaks. Director Roy Baker’s efficient direction and writer Daniel Taradash’s clever scripting keep the story from descending into melodrama. Though the disc is somewhat light on extras (and one of the bonus documentaries is presented in a truncated form), the first rate transfer is the real star of the show here. Fans of Monroe will be delighted at just how good the film looks and sounds, and those unfamiliar with the title may be surprised at just how effective the film is. 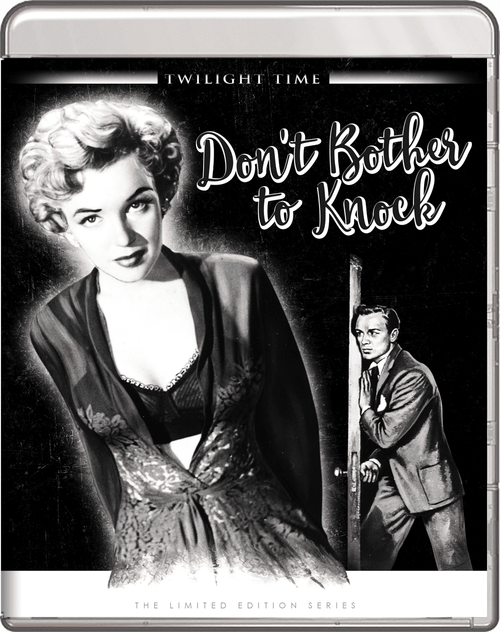