Ever since Cronos (1992), Guillermo del Toro has established himself as a singular voice within the horror genre, melding together different genres with a keen eye for stunning visuals. Nestled between the sci-fi blockbuster Pacific Rim (2013) and the Oscar-winning fantasy The Shape of Water (2017), Crimson Peak is a stunning Gothic romance with a few touches of horror elements added for good measure. Previously released by Universal on both DVD and Blu-ray, Arrow Video has licensed the film and given it the Limited Edition treatment on Blu-ray.

“Ghosts are real, that much I know. I’ve seen them all my life…”

Thus opens the story of Edith Cushing (Mia Wasikowska), an independent and strong willed writer in turn of the 20th Century Buffalo, NY, who is swept off her feet by Sir Thomas Sharpe (Tom Hiddleston) after the two meet when the latter meets with her father (Jim Beaver) about one of his inventions. Following a family tragedy, she marries Thomas and moves into Allerdale Hall, his baronial yet desiccating mansion that she shares with his sister Lucille (Jessica Chastain). However, it becomes apparent to Edith that something else shares the home with them: spirits, grotesque in nature, inhabit the Gothic corridors of a mansion and are linked to dark secrets from the Sharpe family past. These are secrets that will put Edith’s life on the line…

One thing is undeniable about Crimson Peak: it’s absolutely beautiful to look at. Guillermo del Toro, along with production designer Thomas Sanders, costume designer Kate Hawley, cinematographer Dan Laustsen, and composer Fernando Velazquez have fashioned an atmosphere that’s reminiscent of the Gothic romances of Classic Hollywood – think of Wuthering Heights (1939), Rebecca (1940), and Dragonwyck (1946), for example –  yet still has some of the touches of the director’s earlier works like The Devil’s Backbone (2001) and Pan’s Labyrinth (2006), basically a Gothic fairy tale, if you will. For all the visual splendor, the only place where the film has some issues is with the script; the characters aren’t always fully fleshed out and the plot covers territory that’s familiar to fans of Gothic romances. However, that can be mostly forgiven, since del Toro does manage to keep a steady pace and has added a few touches of symbolism relating to some notable horror movies that helped inspire the movie. This is a case where watching the movie once simply isn’t enough: once to appreciate the beauty of it’s design, and more than once to uncover the references buried within visually.

Cast in the lead, Mia Wasikowska is both a luminous and strong heroine; that shouldn’t be too surprising, given that she already inhabited such a part in Tim Burton’s reimagining of Disney’s Alice in Wonderland (2010). Tom Hiddleston, in a break from his better known on-screen persona as Loki from the Marvel Cinematic Universe, makes for an appropriately mysterious yet dashing Thomas; his character could easily inhabit the personas of other well-known Gothic figures like Mr. Rochester (Jane Eyre) and Maxim de Winter (Rebecca). As the equally mysterious Lucille, Jessica Chastain probably has the best performance out of the three leads; her character could have just as easily been imagined as Mrs. Danvers (Rebecca), but put into a familial context. Other performances worth looking out for are Charlie Hunnam as Edith’s close friend who becomes the hero in the second half of the movie, Jim Beaver as Edith’s ill-fated father, Burn Gorman as a private eye hired by Edith’s father, and Doug Jones, a go-to-guy (or is it go-to-ghoul?) for del Toro’s movies, as the ghosts of Edith’s mother and Lady Beatrice Sharpe.

Presented in its intended 1:85:1 aspect ratio, Arrow’s transfer of the film is carried over from the previous Universal Blu-ray; shot with a digital camera and  then printed onto 35mm film, the movie looks just as stunning in presentation on video as it does on the big screen. As it was shot digitally, images are clear throughout with great detail evident and the colors are vivid as well. In other words, the transfer does full justice to the vivid images we see on the screen.

The original DTS:X soundtrack is presented in a 7.1 audio track, with the DTS:X headphone track presented as an alternate 2.0 track. Dialogue is strong and clear throughout along with the sound effects mix and Fernando Velazquez’s lush and haunting score has great ambiance and fidelity. The disc also has an optional discriptive video service (DVS) track included; both tracks are very good but the 7.1 track is the way to go with this one.

Commentary by Guillermo del Toro – Ported over from the Universal Blu-ray, the director and co-writer goes over some of the influences on the movie as well as some insight on Gothic romance; an insightful, interesting and engaging track.

The House is Alive: Constructing Crimson Peak (50:01) – Newly edited for this release, this feature length documentary goes over the production of the film in a neat fashion, created from previous featurettes as well as behind-the-scenes footage and interviews. Among those interviewed are Guillermo del Toro, Mia Wasikowska, Jessica Chastain, Tom Hiddleston, Charlie Hunnam, Jim Beaver, production designer Thomas Sanders (who passed away in 2017), costume designer Kate Hawley, and producer Jon Jashni.

Unseen Spanish-language interview with Guillermo del Toro (8:35) – A brief interview with the director on the film and some of the inspirations that went into making it.

Allerdale Hall – Four brief featurettes carried over from the previous Universal Blu-ray about the different aspects of the mansion: Gothic Corridor (4:07), The Scullery (4:25), The Red Clay Mines (5:19), and The Limbo Fog Set (5:42)

A Primer on Gothic Romance (5:36) – Retained from the Universal Blu-ray, this brief featurette has the cast and crew talking about the basics of the Gothic romance subgenre.

The Light and Dark of Crimson Peak (7:54) – A look at the distinctive use of colors to tell the story of the movie; carried over from the Universal Blu-ray.

A Living Thing (12:12) – A look at the design and construction of the Crimson Peak set.

Beware of Crimson Peak (7:52) – Tom Hiddleston takes us on a guided tour of the Allerdale Hall set.

Crimson Phantoms (7:03) – The distinctive ghosts (the work of FX artists David Marti and Montse Ribe) are given a closer look in this brief featurette.

Crimson Peak and the Tradition of Gothic Romance (17:37) – Filmed for this release, film historian Kim Newman goes over the Gothic romance subgenre as well as Crimson Peak’s place within said subgenre.

Violence and Beauty in Guillermo del Toro’s Gothic Fairy Tale Films (23:37) – Newly filmed for this release, Kat Ellinger goes over the union and contrast between the stark violence and the ethereal beauty that populates much of del Toro’s work in this visual essay.

TV Spots – Two of the many TV spots are presented here, running just over a minute combined.

Crimson Peak may have gotten a mixed reception from both critics and audiences during its initial release, but it has set itself up for a long life as a genre favorite in the years to come. Arrow Films carries over much of what Universal already gave it on its initial home video release, but adds a few more goodies in the form of two new scholarly features and a feature length documentary as well as some collectible goods too. If you missed out on the original Blu-ray, now’s the time to pick up this copy and soak in one of Guillermo del Toro’s most beautiful films of his career. 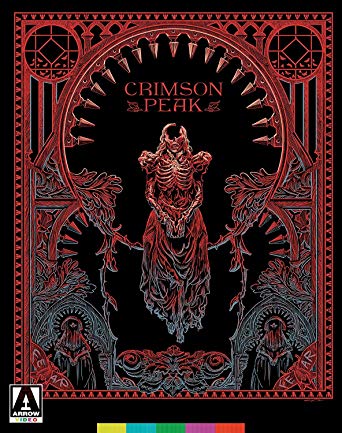