The world has come under attack by kaijus, giant creatures emanating from a portal deep under the ocean in the Pacific Rim. The Earth’s only defense has been to build jaegers, giant robots of similar stature to the kaijus manned by two or more humans connected by a mental link known as “drifting,” enabling the drivers to operate in sync. But humans are beginning to lose the battle, with more and stronger kaijus arriving in greater frequency, defeating the jaegers. The humans decide to build walls along both sides of the Pacific Ocean in an attempt to keep the monsters out, with the jaegers demoted to temporary defense and taking up residence at Shatterdome, just outside Hong Kong.. When a kaiju breaks through the wall in Hong Kong with relative ease, Shatterdome’s commander, Marshal Stacker Pentecost (Idris Elba) assembles the last remaining jaeger pilots, including Raleigh Becket (Charlie Hunnam), who retired from the program when his brother and co-pilot was killed while they were still in the drift during a battle with a kaiju. Becket is teamed with Mako Mori (Rinko Kikuchi), a young woman whom Stacker rescued and raised as his own adopted daughter. Meanwhile, Drs. Newton Geiszler (Charlie Day) and Hermann Gottlieb (Burn Gorman) are researching ways to bring down the kaiju, with Geiszler using the drift to link with the remnants of a kaiju brain, and begins to unlock the secret of why the kaijus are attacking – an alien race manufactured them to wipe out all life on Earth so that they can repopulate the planet. With Gottleib’s help, they discover a weakness that may help Stacker and his team of jaeger pilots to close the portal once and for all.

Although a major box office hit overseas, Pacific Rim was something of a disappointment for Warner Bros. here in the states. It sank very quickly, with 3D and IMAX engagements disappearing and all but gone by the time I caught it in its third week of release at a 2D screening in one of the theater’s smaller auditoriums. I absolutely loved this movie, from the action sequences, to the comic relief casting of Charlie Day and Burn Gorman as the scientists and Ron Perlman as black market kaiju dealer Hannibal Chau, all the way to the rocking score by Ramin Djawadi. Although some of the trailers depicted a more serious film, del Toro has a lot of fun with his material, and manages to show Hollywood that he can handle a big budget summer blockbuster, especially coming after his retreat from The Hobbit and the inability to get At the Mountains of Madness, a film based on the novella by H.P. Lovecraft, produced with James Cameron.

Pacific Rim was captured in 5K on Red EPIC cameras and completed as a 2K digital intermediate. Don’t let that deter you from this upscaled 4K UHD release, as the movie has never looked better (with the possible exception of its 3D counterpart). Colors are more vibrant and natural, so much so that they virtually pop on the screen. Detail is greatly improved, from the intricacies of the armor on the jaegers, the textures on the skins of the kaijus, the battle scars on the jaeger pilots, and the raindrops falling during many of the battles (which del Toro says he wanted to help show the massive and epic scale of these behemoths). Contrast is also rock solid, with deep blacks that manage to still retain a high level of shadow detail without crushing, and bright whites that never clip. I don’t mean to knock the previous Blu-ray release, because that was a reference-quality transfer, but if my wife can tell the difference between this new 4K UHD disc and the 1080p Blu-ray, saying (in a good way) that the 4K is a completely different experience, then that is high praise, indeed.

It was perhaps unfortunate that Pacific Rim was first released on home video before Dolby Atmos arrived in the homes, with the Blu-ray (both 3D and 2D) being fitted with both 7.1 and 5.1 DTS-HD Master Audio tracks that in their day (only three years ago) were considered reference quality. This new 4K UHD release gets a Dolby Atmos upgrade (with a Dolby TrueHD 7.1 core) that will rock your home theater, even when played back in a 5.1 configuration with added heights and Pro-Logic IIz enabled. The result is a much more immersive mix, with sounds coming at you from all directions. Heights are used to great effect to replicate the sound of rainfall, helicopters flying overhead, underwater immersion, etc. Dialogue is always clear and understandable, directed mostly to the center channel with panning used when necessary. LFE also gets a good workout when the behemoths are smashing each other to pieces, walking or running down a city street, and, of course, explosions. This track will not disappoint.

Unfortunately, here is where the disappointment comes. There are no special features whatsoever on the 4K UHD disc. Warner has included a Blu-ray copy of the movies (as well as a Digital HD UltraViolet copy), but only the movie disc has been included (and still contains the trailer for Seventh Son which ended up being distributed by Universal). Missing here is the second Blu-ray disc of additional featurettes that was included in both the 3D and 2D Blu-ray releases.

Audio Commentary with Director Guillermo del Toro: This is a wonderful track, in which del Toro goes into much detail (as he usually does on these tracks) on the making of the film and the reason behind many of his choices, in addition to many of the challenges he faced while making the film.

Focus Points (1080p; 62:26): Viewable individually or as one long feature via a Play All icon, this is a series of thirteen detailed looks at the making of the film.

Pacific Rim in 4K UHD is another spectacular upscaled release from Warner Bros, with reference quality video and audio. For those wanting to upgrade from the previous 3D or 2D Blu-ray release, you will likely want to hold on to those (especially the 3D), as most of the special features from either of those sets are missing here. 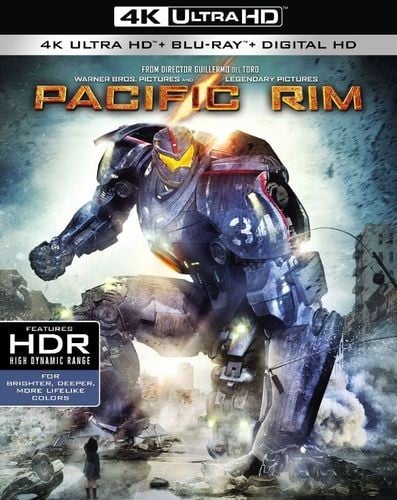