An interesting dichotomy between philosophies of living gives Matt Ross’ Captain Fantastic its unique personality and flavor. With a singular approach to a lifestyle foreign to many of us and yet comforting at the same time to watch unfold, the movie manages to both intrigue and frustrate providing for the audience many of the same emotions and urges as with some of the characters in the story.

Determined to shield his family from the decadence and distractions of modern life, Ben (Viggo Mortensen) raises his six children (George MacKay, Samantha Isler, Annalise Basso, Nicholas Hamilton, Shree Crooks, Charlie Shotwell) with disciplined precision in a remote forest enclave in the Pacific Northwest. But when his wife commits suicide under institutional supervision, the family, though told not to come to the funeral by the wife’s angry father (Frank Langella), is forced to interact with the outside world for the first time as they take a memorable road trip to New Mexico for the interment, something that as a Buddist was expressly against her wishes.

Director Matt Ross has written a screenplay that offers for this unique family an almost primordial paradise with counter-culture routines that display the family at its most basic: living, working and playing together as the sole human inhabitants of their own private world. We see the family hunt together (an expressive opening scene that quickly establishes this as a most distinctive group) and then montages of the family training sessions, study time, and musical/rhythmic group interludes, the results of which are displayed by the children continually throughout the remainder of the movie. Ross shoots an extraordinarily beautiful rock climbing sequence with astonishingly gorgeous photography (Stephane Fontaine serves as director of photography), and some other sequences like a rooftop excursion that brings to mind moments from Hitchcock’s To Catch a Thief and the climactic funeral pyre celebration likewise evince the painterly eye of this director in only his second film (following 28 Hotel Rooms). The screenplay also sets up in several scenes the contrast between these forward-thinking, educationally advanced children raised in the wild and the cellphone-addicted, videogame-oriented generation they’re set apart from (outrageous to think today’s average teens have no idea what the Bill of Rights is and that the name “Spock” has totally different meanings, both viable in certain contexts, to each of them). Ross’ script is a bit clumsy in coming to its denouement that a taste of the modern world wouldn’t be so toxic for the kids after all, and the serious breaches in family dynamics (not only with the grandparents played by Frank Langella and Ann Dowd but with the sister and her husband played by Kathryn Hahn and Steve Zahn) aren’t settled on-screen and are left to our own imaginations.

Viggo Mortensen is the perfect actor to play this man-of-the-earth, an appealing combination of strong-willed determination, forthrightness, and gentleness, and his performance is right on the money. Of the children, the oldest son played by George MacKay and the next oldest played by Nicholas Hamilton have by far the showiest roles, MacKay since his character Bodevan is starting to express interest in girls and is looking to expand his horizons toward college (having already been accepted by six Ivy League schools at his mother’s urgings) and Hamilton’s Rellian who’s starting to notice that previously forbidden outside influences like fast food and Christmas might not be such bad things in moderation. The other children get less screen time but do impress when they are offered a moment in the spotlight. Frank Langella’s father is a bit overbearing and unyielding (why wouldn’t he respect his daughter’s wishes in her will or those of her legal husband?) and is more a one-note performance not entirely worthy of the actor though Ann Dowd with far less screen time proves to be a loving and needful grandmother. Kathryn Hahn and Steve Zahn likewise don’t have enough screen time to establish firm characterizations and seem more flaky than grounded. Erin Moriarty as the simple-minded girl who catches Bo’s eye and Missi Pyle as her smirking mother offer decent cameos showing with their smoking and limited world view the elements of society that Ben is desperately trying to help his children to rise above.

The film’s 2.40:1 theatrical aspect ratio is faithfully represented in this 1080p transfer using the AVC codec. Generally speaking, the transfer is a gorgeous one with all of the forest scenes breathtakingly beautiful with sharpness and color saturation levels pretty near perfection. Black levels are not quite as impressive, but contrast has been applied with consistency. The movie has been divided into 20 chapters.

The DTS-HD Master Audio 5.1 sound mix is most effective. Dialogue has been well recorded and has been placed in the center channel. Alex Somers’ background score and music interludes with the family on guitars and other instruments including a late rendition of “Sweet Child of Mine” get excellent spread through the fronts and rears. So, too, do the atmospheric effects which offer effective immersion into the world of the film.

Insane or Insanely Great? (4:01, HD): a brief behind-the-scenes featurette with writer-director Matt Ross and stars Viggo Mortensen and Frank Langella telling the film’s story and representing the viewpoints of the two opposing sides.

Matt Ross’ Captain Fantastic certainly is a cut above the usual Hollywood frivolity. It’s a thoughtful and well-meaning examination into child rearing and the positive and negative influences of modern society in a well-directed and expertly acted domestic drama. Thoughtful moviegoers might want to at least consider a rental. 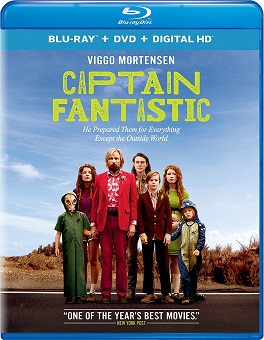