You can’t call a film by the Wachowski’s visually boring, and their latest, Jupiter Ascending, certainly is pretty to look at. Unfortunately, there’s not much else there, a story with so many plot holes you can drive a truck through and a hero (Mila Kunis as the title character) that could very well be the most unsympathetic in modern movie history.

Jupiter Jones (Mila Kunis) lives day to day cleaning toilets in Chicago, wishing for a better life. One day, when she goes to a clinic to sell her eggs (and giving most of the money to her cousin), she is saved from an attempted assassination by Caine Wise (Channing Tatum), who reveals to her that she is the genetic duplicate of an alien queen, whose three children, Balem (Eddie Redmayne), Titus (Douglas Booth), and Kalique (Tuppence Middleton) are fighting over the rights to harvest the humans on Earth for their life serum so that they (and others, for a price) can continue to live virtually forever. The three are spoiled brats, with Kalique being the most passive by allowing Jupiter to claim her genetic certification, Titus having an Oedipal complex by trying to marry Jupiter, and Balem wanting Earth at any cost, including whining his threats like when candy is taken from a baby.

There are many problems with Jupiter Ascending. First and foremost is our heroine herself, Jupiter. The Wachowski’s have created a protagonist that makes several bad choices, and then makes some more (selling her eggs and giving the money to her cousin, agreeing to marry Titus, etc.). The actress who portrays Jupiter, Mila Kunis, is not to blame here, as she turns in a good performance, it’s how the character was written and her actions throughout the movie. Channing Tatum is also very good as Caine, but half-man, half-wolf who had his wings removed as punishment? Really? Sean Bean mumbles his lines as Stinger Apini, a comrade of Caine’s who happens to be half-man and half-bee (?), and was sentenced to Earth, also as punishment. Of course, there is also the plot itself, which has Jupiter captured by each of the three siblings, and each time rescued by Caine. The movie did have two things I rather enjoyed – the visual effects (you can’t call a movie by the Wachowski’s visually boring) and the score by Michael Giacchino.

Jupiter Ascending was a box office dud, after having its release date delayed several times due to poorly received previews and unfinished visual effects, grossing just under $184 million worldwide against an estimated budget that had ballooned to $176 million. It was the Wachowski’s swan song at Warner Bros, who have found a new home at Netflix with their series Sense8.

Jupiter Ascending was completed as a 2K digital intermediate, so this is another upscale to 4K UHD. For some odd reason, Jupiter Ascending does not seem to want to play nice with my setup in terms of video, providing a much darker and dimmer experience than the included Blu-ray version. Even with backlighting cranked to 100% on my display, the Blu-ray seems to shine with brighter colors, better contrast, and more visible detail. In fact, at 100%, the Blu-ray suffers from being too bright. This is the first disc I’ve experienced this with, having just reviewed Pacific Rim on UHD just the other day here on Home Theater Forum, and nothing has changed in my settings or firmware on either my LG 65UF8500 display or Samsung UBD-K8500 UHD Blu-ray player.

This 4K UHD release contains the same Dolby Atmos track (with Dolby TrueHD 7.1 core) as the included (and previous) Blu-ray release. As expected, this is a truly immersive mix, even when played back in a 5.1 configuration with additional heights and Pro-Logic IIz enabled. Dialogue is clear and understandable, directed mostly to the center channel with panning utilized where necessary. Surrounds and LFE are very active during the many visual effects-heavy action sequences, with heights enabled especially during the battle over Chicago.

The Wachowskis: Minds Over Matter (1080p; 7:25): A look at the writer-director siblings and their creative process.

Jupiter Ascending: Genetically Spliced (1080p; 10:25): A look at the creatures created for the film.

Bullet Time Evolved (1080p; 9:35): A look at how the action sequences were conceived and filmed.

Jupiter Ascending is an incoherent mess of a movie, and the 4K UHD was something of a disappointment in the video department. Fans of the film will likely want to keep their 3D or 2D Blu-ray editions and skip the 4K UHD upgrade. 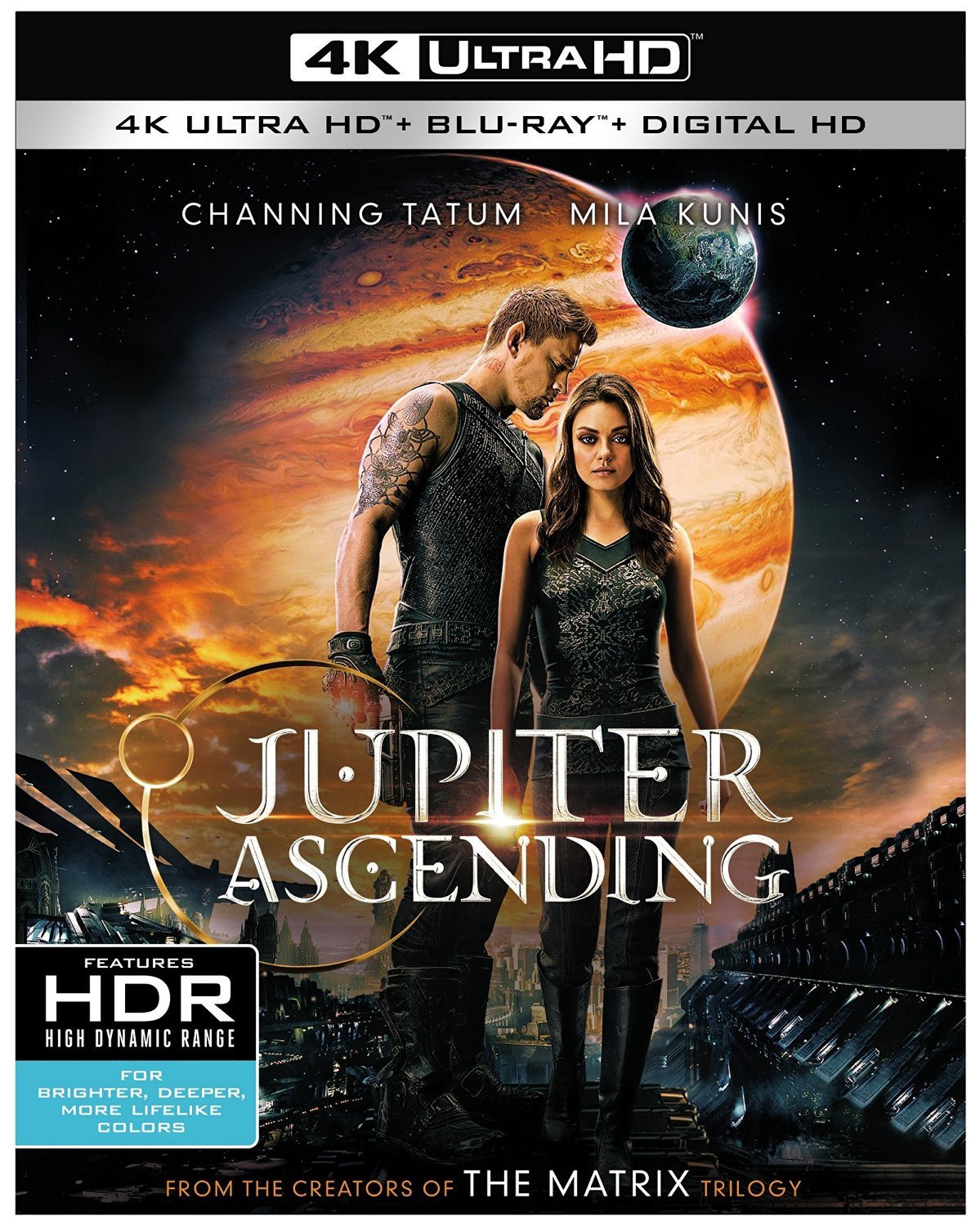