Guillermo del Toro’s masterful amalgam of gothic horror tale with a coming of age story tied to the tenets of historical fiction has produced one of his greatest films The Devil’s Backbone. With superb acting, a unique setting, and a story which doesn’t accentuate gore in its ghostly tale but rather allows us to see real life horrors contained within, The Devil’s Backbone, even more than in his more popular Pan’s Labyrinth, shows the director working at the top of his craft. 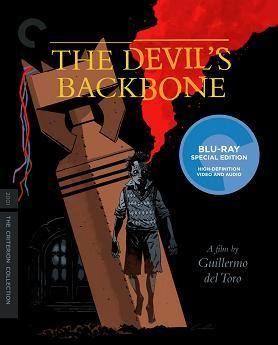 During the final stages of the Spanish Civil War, an orphanage barely scraping by is under constant threat of extermination by the radical fascists. The sweet-natured Carlos (Fernando Tielve) is dropped off there by his father who’s off to fight to rebels, and though the home’s commissioner Carmen (Marisa Paredes) dreads the thought of another mouth to feed, she takes him in. Abused by the bullying head of the boys Jaime (Inigo Garces), Carlos is both drawn to and scared by the apparition of a ghostly boy named Santi (Junio Valverde) who had disappeared the day a bomb had dropped into the middle of their playground but had failed to go off and who is now as a ghost predicting a massive amount of death that is coming. All of the adults at the institution other than teacher Casares (Federico Luppi) are eager to leave, and that includes lovers Jacinto (Eduardo Noriega) and Conchita (Irene Visedo), but Jacinto must first find a stash of gold that he knows Carmen has in a safe in her office. He’s willing to stop at nothing in order to take that gold for himself in a way as payment for years he had spent there first as an orphan and later as the home’s muscular handyman.The film is a gothic thriller to be sure, but director-writer Guillermo del Toro (with his co-writers Antonio Trashorras and David Munoz) has fashioned something much richer and more meaningful than a mere ghost story. The character studies in the movie are devastatingly intricate and fascinating in their construction as we get to see the drives and emotions that make these people, both adults and children, tick, and the film is constantly shifting gears and offering up surprises (we finally learn the truth about Santi’s death seventy-eight minutes into the picture, and it’s not at all what we thought). Characters who seem straight from the stock room as bullies or charm boys reveal layers of depth that actually see us forming altered views of them as the movie progresses, and the ghosts in the film (two eventually make their presences known) also cease to be so scary and become more helpful to the children who are constantly under the threat of death. Even with victories come the uncertainties of the future which also add a sophisticated realism to the tale and take it away from a purely sunny resolution. The sense of melancholy that hangs over the film even in its final images is palpable.The performances are, for the most part, superb. With the exception of Irene Visedo’s Conchita who seems sometimes less committed to the role than the other adults (though she has a powerful climactic encounter with her lover), the adults give commanding, astonishing performances. Federico Luppi’s quiet but firm instructor frustrated by his impotence is wonderfully dynamic, and Marisa Paredes as the one-legged Carmen is equally authoritative. Eduardo Noriega hiding an evil core beneath his handsome, imposing exterior is likewise terrific. Fernando Tielve is a wonderfully talented child actor completely at ease as the intelligent and curious boy trying his best to make friends and prove himself worthy of companionship. Inigo Garces isn’t quite as forceful as the harassing Jaime, but his strength of character begins to emerge in the film’s second half.

The transfer has been framed at its theatrical 1.85:1 aspect ratio and is presented in 1080p using the AVC codec. This is a reference-quality transfer with superb sharpness and stunning color values despite del Toro’s deliberately limited color palette. Skin tones are entirely natural throughout, and the impressive special effects don’t call attention to themselves with the striking clarity available in the transfer. Black levels are excellent with impressive shadow detail. Subtitles are in white and are very easy to read. The film has been divided into 28 chapters.

The DTS-HD Master Audio 5.1 sound mix has moments of impressive surround activity, but many opportunities for more haven’t always been exploited. Dialogue has been captured wonderfully and has been placed in the center channel. Javier Navarrete’s music is mostly spread across the front soundstage with mostly only echoes in the rear channels. There is some effective use of the LFE channel to add spooky atmosphere to the early visuals before we get the entire story of the ghost’s presence at this orphanage.

Audio Commentary: director Guillermo del Toro has recorded a new commentary for this Criterion release and at times refers the viewer to the earlier commentary on the previous commercial release so he doesn’t have to repeat stories. However, with del Toro playing such a prominent role in all of the bonuses in this set, there is much repetition here to comments he makes in other bonus features.Guillermo del Toro’s Introduction (0:48, HD): a true introduction to the movie which is very brief and to the point and gives nothing away.Guillermo del Toro’s Thumbnails (HD): a feature which can be turned on and which puts on the screen the director’s drawings of scenes and characters at the appropriate moments in the movie.Summoning Spirits (13:47, HD): a 2013 interview with the director in which he discusses the creation of Santi as the ghost motif in the movie.Que es un fantasma (27:18, HD): a 2004 documentary by director Javier Soto covering the making of the movie.Spanish Gothic (17:54, HD): a 2010 interview with the director in which he discusses the genesis of the script and his combining gothic melodrama with other elements for his story.Director’s Notebook (HD): an interactive tour of del Toro’s pre-production notebook which also allows for occasional videopods of information narrated by del Toro (which run a collective total of 9:05).Designing The Devil’s Backbone (11:57, HD): a 2013 interview in which the director discusses the importance of collaborating with his production designer and costumer to achieve the effects he wants for his film.Four Deleted Scenes (3:36, HD): these may also be watched individually.Sketch-Storyboard-Film (12:02, HD): six sequences from the movie which may be viewed in split screen windows featuring del Toro’s thumbnail sketches, the film’s storyboards by Carlos Giménez, and the finished work.A War of Values (14:07, HD): a 2013 interview with historian Sebastiaan Faber about the history and importance of the Spanish Civil War in establishing the setting and atmosphere of the movie.Theatrical Trailer (2:05, HD)Enclosed Pamphlet: contains cast and crew lists and film critic Mark Kermode’s analytical essay on the movie.Timeline: can be pulled up from the menu or by pushing the red button on the remote. It shows you your progress on the disc, the title of the chapter you’re now in, and index markers for the commentary that goes along with the film, all of which can be switched on the fly. Additionally, two other buttons on the remote can place or remove bookmarks if you decide to stop viewing before reaching the end of the film or want to mark specific places for later reference.

Guillermo del Toro’s The Devil’s Backbone is one of the writer-director's strongest films and one of his most accessible to all audiences. A gorgeous high definition transfer and a panoply of extras make this a must-have for fans of the director’s unusual works. Highly recommended!