At the ISE 2019, Audio Excellence (the sound system division of UK-based film screen brand Screen Excellence) will unveil a new audio concept for large TVs and solid screens that will create an “illusion of sound” coming directly from the center of a hard-surfaced screen, even if the speakers are placed elsewhere in the room. The company has named the idea “UFO” (for Unidentified Flying Object).

Audio Excellence says that the UFO is in keeping with professional cinema practices of placing center, left and right channel speakers on the same horizontal plane and behind an acoustically transparent (A.T.) film screen. Screen Excellence CEO Patrice Congard has previously designed audio products which the company says have set “industry benchmarks” with a patented approach to layout logic and signal routing known as “The Congard Code”, and in 2016 introduced Audio Excellence home cinema sound systems. These consisted of compact yet high-sensitivity, high-SPL on/in-wall loudspeakers, amplifiers and DSP controllers. The systems maximized the initial “Wavefront” of sound, delivering “more realistic” bass with every seat in the room being the sweet spot. 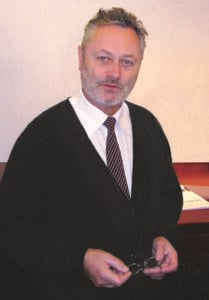 CEO Patrice Congard
“In 1996 I left the sound reinforcement industry to focus on what I perceived as the main issue facing home cinema installations: the conventional solid projection screen was a physical barrier to the proper appreciation of a movie’s sound track,” says Congard. “This has been solved with a new breed of woven acoustically transparent projection screens.” Congard went on, “However, today as flat screen TVs grow in size, they become a trending alternative for the drop-down projection screens traditionally used in a media room. Yet, this immediately presents a problem… How can the sound come from the image displayed on a large rigid solid screen, like a flat panel TV?”Audio Excellence will apparently not be revealing any of the specifics of the technology until early February at ISE on stand 1-Q110, at which point we’ll cover more, but the company is so far offering the following information about UFO: