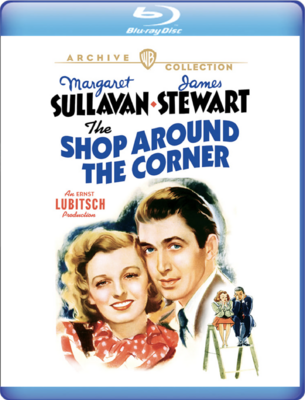 Special Features: Vintage MGM promotional film: "The Miracle Of Sound"; Screen Guild Theater radio broadcast (9/29/40) with Margaret Sullavan, James Stewart and Frank Morgan; Lux Radio Theater broadcast (6/23/41) with Claudette Colbert and Don Ameche.
Ernst Lubitsch adds his unique style of directorial aplomb to this timeless love story that marked the third of Margaret Sullavan and James Stewart's four film appearances together. A 1936 play by Nikolaus Laszlo called "Perfumerie" was the basis for this timeless love story set in a Budapest shop. With a witty screenplay adaptation by Samson Raphaelson, Stewart and Sullavan play bickering gift-shop workers Alfred and Klara, unaware that they have fallen in love with each other as secret pen pals who only know their respective correspondents as "Dear Friend". The charm of the stars ably supported by a sterling supporting cast headed by Frank Morgan make this timeless classic one to enjoy over and over again. The story was later filmed as "In The Good Old Summertime" with Judy Garland and Van Johnson in 1949, and as "You've Got Mail" in 1998. It was also the basis of the 1963 Broadway musical favorite "She Loves Me". Beautifully remastered from protection film elements made right from the original nitrate negative, this new Blu-ray presentation of the original 1940 classic is a joy to behold

Release date according to Amazon is December 22nd.

Ronald Epstein said:
Beautifully remastered from protection film elements made right from the original nitrate negative, this new Blu-ray presentation of the original 1940 classic is a joy to behold
Click to expand...

There's some fancy marketing double talk in that press release!!

Will Krupp said:
There's some fancy marketing double talk in that press release!!
Click to expand...

At least it's "remastered" and not "restored."

On one of the Warner Archives podcasts Feltestein (spelling?) mentions that MGM destroyed all their negatives from their black and white films afer they made the protection masters. He mentions this in the podcast talking about PRIDE AND PREJUDICE. Not sure if he meant every single one, but that is certainly what he says so this is the best they are ever going to be - and so far they have been very good.
C

This week’s Podcast told us that this negative did not burn. This release is already up on HBO max and it looks absolutely fantastic! If only Paramount would contract Warner to do It‘s a Wonderful Life - alas.
P

Not knowing if you have the 4K/UHD or the non-inclusive and separately available B/W BD of the “Its a Wonderful Life” restoration; but either way, I have both, and found a greater ease and less cumbersome experience with the BD. I prefer the BD image; but do note that there are also defenders of the 4K/UHD.

Looking forward to seeing “The Shop Around the Corner”.
Last edited: Dec 6, 2020
C

I have all versions of Wonderful life. I’m with you - prefer the BD. I find the grading on the 4Ks grossly overdone. Talk about loss of shadow detail. Of course I’m always viewing in projection.

IMHO, films meant to be viewed in a theater should not be graded to use the entire range of 400 nit displays. There is no such thing as even a single pixel anywhere close to 400 nits in any theater. Digital Cinema standard is 48 nits, with 80 for IMAX, and a gorgeous 108 for the handful of Dolby Cinema screens which exist. We don’t limit home video presentation to 48 nits because that would look artificially flat and dull at home. It wouldn’t look like film. But neither do some of the 4K transfers which are stretched out over an artificially enormous dynamic range.

When a modern film goes into grading, they will typically create three versions: one for Blu-ray - SDR home video, 100 nit max, rec 709 color; one for digital cinema - DCI-P3 color, digital Cinema brightness levels; and then a 4K HDR version, also for home video, with BT 2020 color, and a max brightness level completely at the discretion of the colorist. Many great colorists make wonderful use of the larger pallet of color and gradation offered here. But sometimes they can really push that HDR look, a look which may be great for nature documentaries or sports, but which no longer resembles film at all.

There’s always a temptation to overuse new tools - remember all that edge enhancement on early DVDs? and all the waxy “noise reduction“ on early Blu-rays? Many of these early efforts needed to be redone not because the technology improved, but because once the excitement of the new toys died down, better judgement prevailed.

I feel that some films (especially older ones) being transferred to HDR are suffering similar fates.

Really looking forward to this Blu-ray. I adore the movie, my favorite movie incarnation of the story (and this from a HUGE Judy Garland fan).

Matt Hough said:
Really looking forward to this Blu-ray. I adore the movie, my favorite movie incarnation of the story (and this from a HUGE Judy Garland fan).
Click to expand...

I think you'll be pleased - it looks great!

I have the Blu-ray on preorder but I may cancel since it’s available on HBOMax.

We are going to watch it tomorrow.

Color me naive, but why don't these appear on the TCM app?

Because they want to boost disc sales?

Mike Frezon said:
Color me naive, but why don't these appear on the TCM app?

Because they want to boost disc sales?
Click to expand...

Movies are only available on the TCM app for one month after they air. As soon as TCM airs them again they will reappear on the app. HBOMax’s curated collection has no correlation to actual airdates.

The streaming version via HBOMax is gorgeous! Just a couple of brief shots seemed to lack the contrast and punch of the rest of the film, but that’s likely how they looked in 1940. 99% of this presentation is absolutely stunning!

I am going to let my Blu-ray preorder stand. Quality restorations like this deserve as much support as they can get.

Really wish that since these new WA transfers are streaming on HBO Max that we can get them for the copies we paid decent money for on stores like iTunes
You must log in or register to reply here.