An uneasy alliance of farce and sensitivity that doesn’t lie at all well together, Ken Scott’s Unfinished Business wastes talented players in a paint-by-the-numbers dramedy plot that doesn’t inspire raucous laughs or sweet sighs. Top-billed Vince Vaughn’s string of underperforming comedy vehicles just got a little longer with this unfunny and unimaginative, tasteless brew. 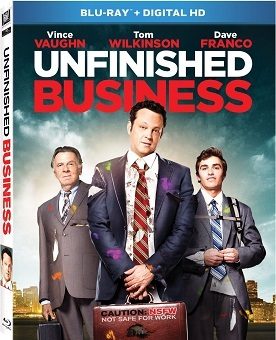 A year after starting his own business accounting firm, Dan Trunkman (Vince Vaughn) is in dire financial straits. He has a final opportunity to make a big score by merging his tiny company with a giant corporation, the Benjaminson Group, but to do that, he must spend his last dollar taking himself and his two-man support team of mentally challenged Mike (Dave Franco) and retirement-aged Timothy (Tom Wilkinson) with him to Berlin to meet the big boss and settle the deal. Once there, he finds a mountain of obstacles in the way of reaching his goal. Mostly, he’s devastated to learn that his abominable former boss Chuck Portnoy (Sienna Miller) is there to make her own deal and smash Dan once and for all. She’s got an ace-in-the-hole by having an intimate relationship going with one of the top men (James Marsden) in the company, so it’s going to take a lot of hard work and more than a little luck for Dan to make the deal happen for his firm.

Screenwriter Steven Conrad has had successes in the past merging the silly and the solemn in such films as The Pursuit of Happyness and The Weather Man though his last time out with The Secret Life of Walter Mitty, as with this film, had a hard time striking a comfortable and entertaining balance between comic and serious tones, here steamrolling domestic problems with a bullied teenaged son and a daughter who’s acting out at school (ridiculously having wife Susan played by June Diane Raphael interrupting business meetings so that hubby can handle problems at home) with farcical scenes featuring Mike losing his virginity, Timothy ordering up a sex maid service, the trio attending a gay Folsom Fair-like celebration in the city, and Dan having to stay in a hotel room-as-art widow display due to a lack of available living quarters in the city during all of these celebrations in October. Director Ken Scott stumbles on one funny bit of visual comic business: Mike and a Japanese cohort sharing a giant plastic hamster ball that they must run through the streets of Berlin to reach an appointment, but many of the other farcical set-ups (including an extended bit of tomfoolery in a men’s room filled with glory holes, a naked sojourn to a co-ed spa, and crashing through police barricades at a G8 summit) just strain miserably for laughs with a higher-than-expected number of misses.

Once again, Vince Vaughn’s attempts to be humanely amusing with a tongue-in-cheek delivery of the comedy stuff is miles different from his old motormouth technique which was, frankly, exhausting. But it doesn’t always get the desired effects, and all of the domestic scenes with his family either together or via Skype just seem ineffectual despite everyone’s best efforts. Tom Wilkinson doesn’t earn a single laugh as an elderly man grasping for a second chance at happiness while Dave Franco’s soft-spoken, halting delivery and naiveté in the ways of the world wear out their welcomes within the first fifteen minutes of his introduction in the movie. Sienna Miller’s one-dimensional bitchy performance as the smug boss who rubs in her victories certainly makes her a desirable target to be crushed, but it’s a cheap shot to make her so dastardly superior with no shadings at all to her character. Likewise is the problem with James Marsden’s prick character who’s about as sincere as a toothpick. The comic standout of the supporting players is Nick Frost as Bill, Marsden’s assistant whose invisible state of existence at work and in his personal life is pitiable and yet relatable (though one would have liked to have seen him make a more dynamic stand against his boss when the chips are down).

The film’s theatrical aspect ratio of 2.40:1 is accurately delivered in a 1080p transfer using the AVC codec. It’s a bright, sharp, and clear transfer with outstanding detail in close-ups and medium shots and color which is solid and most appealing including accurate skin tones. Contrast has been expertly dialed in for a most consistent visual experience. Black levels are first-rate. The movie has been divided into 24 chapters.

As in many comedies, the DTS-HD Master Audio 5.1 sound mix features a strong front soundstage but only a marginally effective rear one. Dialogue has been well recorded and has been placed in the center channel while neither Alex Wurman’s music nor the appropriate sound effects get more than a cursory spillover into the rear channels.

Deleted/Alternate Scenes (30:59, HD): sixteen sequences can be viewed individually or in montage.

Promo Trailers (HD): Spy, Kingsman: The Secret Service, X-Men: Days of Future Past – The Rogue Edition, Taken 3, among others.

There are only a few moments of fun spread throughout the ninety minutes of Unfinished Business, but fans of the stars may wish to rent the movie and see for themselves how much better they have done in other vehicles.