Warner Bros studio is celebrating their gangster film heritage this May via the release of two "Ultimate Gangsters Collection" Blu-Ray sets with subtitles of "Classics" and "Contemporary". While the "Contemporary" set consists of five previously released films (four from Warner Bros. and one from Paramount), the "Classics" set includes four films making their Blu-ray debut. These include LIttle Caesar and The Public Enemy, two films from the early sound era that defined the genre and featured break-out star-making performances from Edward G. Robinson and James Cagney. Also part of the collection is The Petrified Forest, an adaptation of a hit dramatic stage play featuring a career-making supporting performance from Humphrey Bogart as a world-weary gangster. The fourth and best film in the collection is White Heat, which reunited James Cagney with Warner Bros. in 1949 for what proved to be his valedictory gangster role as the volcanic oedipal Cody Jarrett. All titles are being released separately, but those purchasing the collection will also receive an SD DVD of the feature length documentary Public Enemies: The Golden Age of the Gangster Film, a 34 page hardcover book, and deluxe packaging. 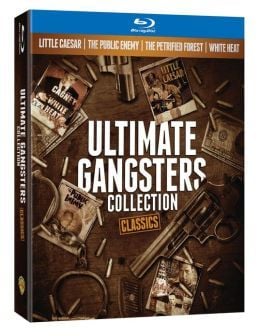 All films in this collection are represented by a black and white 1080P AVC encoded presentations "Pillarboxed" to a 4:3 aspect ratio appropriate for their original theatrical presentation dimensions.Little Caesar **Little Caesar is the oldest and least impressive of the video renderings in this collection. Detail is very limited to the point that subjective improvement over the previously released SD DVD is marginal at best. This is both a credit to the transfer and compression of the older SD release and an indication of limitations in the source element. Contrast occasionally waivers between blooming whites and crushed blacks, although overall shadow detail is adequate despite some density fluctuations during the thinner negative scenes. Damage is largely cleaned up, although the final 20 minutes of the film are plagued by occasional vertical scratches that sometimes last for multiple seconds.The Public Enemy ***The Public Enemy is less than one year younger, but is visually a substantial step up from Little Caesar. It features greatly improved detail and a more consistent rendering of contrast. Film damage is also less evident, although there are still more visible scratches than the two newer films in this set. The vertical scratches appear much less frequently and for a shorter duration than on Little Caesar. Video quality diminishes greatly, but understandably, during a couple of segments that have been restored from censored cuts of the film. One involves and early scene of Cagney and Woods interacting with a very effeminate tailor. The second occurs late in the film and involves the moll of Robert Emmett O'Connor's character coming on to a drunk Cagney on a bed.The Petrified Forest ****Despite being shot by brilliant cinematographer Sol Polito, The Petrified Forest is the least visually interesting film in this collection. Polito's lighting is as expert as usual, but Director Archie Mayo's fondness for long static two shots and close-ups does not match the compositional flair of Little Caesar or The Public Enemy, let alone the kinetic editorial pace of White Heat. Fortunately for the viewers and in defense of Mayo's decisions, Humphrey Bogart and Bette Davis are among the best actors in close-up in the history of cinema, so the film itself still plays well. Having established that caveat, The Petrified Forest receives the overall best visual presentation of the four films in this set. Detail is very good with a noticeable improvement in texture over previous standard definition renderings, film grain looks very natural, and contrast is pleasingly consistent from reel to reel.White Heat ****White Heat is a step up from even The Petrified Forest in terms of fine image detail, but is marred somewhat by an inconsistent level of contrast, with some dark scenes falling off to black a bit faster than others. It is otherwise of very high quality and rewards the viewer upgrading to high definition in non-subtle ways.

Those who do not own these films on DVD are advised to assemble cash, skipping meals if necessary, and purchase this set on Blu-ray. It includes four films, three of which are iconic entries in the gangster genre and all of which include key performances in the careers of Warner's greatest "tough guy" actors. Viewers purchasing the box set in lieu of the individual titles on blu-ray will be treated to deluxe packaging, an attractive hardcover booklet , and a bonus DVD including the documentary Public Enemies: The Golden Age of the Gangster Film as well as four vintage gangster themed cartoons. Owners of the previous SD DVD versions of these titles face a trickier value proposition with substantial video upgrades on all titles except for Little Caesar, which appears to be limited by the available source element, and identical on-disc extras to those included on the SD DVDs.

I am waiting for the eventual price drop and then
I am going to buy this set, though really, this is not
overpriced at $40

I saw that several of these were being shown on TCM last night, but I wanted my next exposure to them to be in high definition with this set. Can't wait for mine to arrive.

Thanks for the review, Ken.

I am waiting for the eventual price drop and then
I am going to buy this set, though really, this is not
overpriced at $40
Click to expand...

If these titles were being sold individually at a street price of $10 each we would be raving about what bargains they are! I have all but Public Enemy on DVD, but I will probably buy the Blu-ray set and the DVDs will turn into gifts.

I just received this set as a gift, and I love it! Is there any word on a Classics Vol. 2?

A. Pismo Clam said:
I just received this set as a gift, and I love it! Is there any word on a Classics Vol. 2?
Click to expand...

I think the chance for that is nil. They released a Volume 2 of the Contemporary Gangsters set one year later, but no Classic Gangsters. Evidently the sales weren't as good on the Classic set as the Contemporary set.
You must log in or register to reply here.