Oscar Wilde's only novel, "The Picture of Dorian Gray," was brought to the screen by M-G-M in 1945 under the able direction of Albert Lewin, who also wrote the screenplay. It is in effect a horror film about idle wealth, privilege, and debauchery in Victorian England, but also is a cautionary tale about the unintended consequences of getting what one wishes for. The Picture of Dorian Gray is now available in a stunning Blu-ray from the Warner Archive. 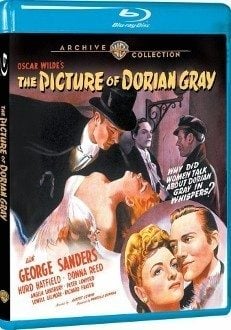 If only the picture could change, and I could be always what I am now. For that I would give everything. - Dorian GrayDorian Gray (Hurd HatfIeld) is a young and handsome aristocrat living in 19th Century London. His portrait is being painted by a friend, Basil Hallward (Lowell Gilmore). The two men have a mutual friend in Lord Henry Wotton (George Sanders), an unapologetic hedonist whose only concern in life is his pleasure. As the portrait is being completed, Lord Henry repeatedly reminds Dorian that his youth is fleeting and that one day the picture will be just a reminder of how he once looked. At this point Dorian makes a Faustian bargain, wishing that he should remain permanently young while the image on his portrait ages.By all accounts Dorian has led a blameless life to this point, but now he begins to follow Lord Henry's advice to seek out pleasure wherever he can find it. His after-hours explorations lead him to a tavern which is frequented by working class men and women of questionable virtue. The owner of the tavern announces that a gentleman has entered the premises and he escorts Dorian to seat in front of the stage. Dorian is then mesmerized by a beautiful young singer, Sibyl Vane (Angela Lansbury) and she is intrigued by his intense good looks.Dorian declines an offer to meet Sibyl, but he keeps returning to the tavern until he finally works up the courage to speak with her. He dazzles Sibyl with his cultured ways and his skill at playing the piano, and she falls in love with him. Dorian and Sibyl become engaged to be married, even though some of his society friends disapprove of her station in life. Lord Henry, who actually supports Dorian's decision, then encourages him to make an outrageous request of Sibyl.As the years pass Dorian's looks are unchanged but his personality is altered dramatically. Incredibly, the portrait which was made years earlier now shows deterioration in both his physical appearance and his character. He becomes the subject of whispered rumors about his lifestyle and members of his club begin to shun him. His friends have grown older and are puzzled by Dorian's perpetually youthful appearance. Basil's niece, Gladys (Donna Reed), was just a small child when the portrait was done and now she is a beautiful woman who is in love with Dorian. Dorian eventually proposes marriage but at the same time his life is continuing to unravel, and his portrait continues to reflect the changes.If The Picture of Dorian Gray sounds a bit like a Twilight Zone episode, you may be thinking about a Season One episode called "Long Live Walter Jameson," which tells the tale of a man who has lived for 2,000 years without aging. The film also is a critique of the idle rich, those aristocrats who have inherited wealth but who do not appear to engage in any productive endeavors. Dorian lives in a beautifully appointed house which is staffed by servants, but he does no work and owns no business. Among his friends, only the painter Basil appears to have any sort of profession. In one scene an unfortunate man is accidentally shot during a hunting party, and the shooter's callous reaction is that the accident has ruined his day. George Sanders is top-billed as Lord Henry, even though his character disappears for significant portions of the film. Sanders turns in one of the better performances of his career. Hurd Hatfield has an almost mystical look as Dorian. Viewers will note that he becomes nearly expressionless, a mask behind which he hides the secrets of his life from his friends. Angela Lansbury, who is radiant as Sibyl, was only 19 years old when the film was made and earned her second Academy Award nomination for Best Actress in a Supporting Role (the first was for Gaslight). She did not win, but she did take home the Golden Globe that year. Donna Reed is gorgeous as Gladys and Peter Lawford appears as the spurned suitor of Gladys. Narration is provided by Sir Cedric Hardwicke.The Picture of Dorian Gray is a strange but compelling film which will not soon be forgotten by anyone who watches it.

The Warner Archive has graced us with another superb Blu-ray transfer. The lovely black & white image is properly framed at 1.37 and exhibits excellent shadow detail, solid black levels, and perfect grain structure. There are also are several brief Technicolor sequences which look terrific. Cinematographer Harry Stradling Sr. won an Academy Award for Best Black & White Cinematography.Our resident expert Robert Harris has written about his impressions of this Blu-ray release and readers are encouraged to read what he has to say.A few words about...™ The Picture of Dorian Gray -- in Blu-ray

The DTS-HD MA 2.0 mono audio is flawless. Every word of dialogue is clear and understandable, and the evocative music score by Herbert Stothart is given a pleasing soundstage. There is no evidence of hiss, noise, or other age-related anomalies.English subtitles are available.

The extras on this Blu-ray disc have all been ported over from the DVD which was released in 2008.There is an excellent commentary track by film historian Steve Haberman and Angela Lansbury (the only principal member of the cast who is still living)."Stairway to Light" is an Academy Award-winning short subject about the doctor who has been credited with bringing the treatment of mental patients out of the dark ages."Quiet Please!" is a funny Academy Award-winning Tom & Jerry cartoon.Also included is the film's original theatrical trailer.

The Picture of Dorian Gray may not appeal to everyone, but those who are intrigued by the premise will not be disappointed. Readers who are familiar with the Oscar Wilde novel should be made aware of the fact that the script takes some liberties with the source material, particularly in its depiction of Sibyl Vane (in the novel she is a Shakespearean actress). Nevertheless, it is a haunting tale brought to life in a near-perfect Blu-ray. It is available at the Warner Archive website.

I'm delighted with this disc which seems to me to be beyond sensible criticism. I'm particularly pleased with the commentary track. Most commentary tracks bore me to tears but this one is excellent. Mr. Haberman has done his research and Angela Lansbury has a remarkably good memory.
Reactions: RMajidi, Richard Gallagher and JoHud

I've had this BD in my unwatched pile until this week, but finally watched it over the past couple of days. I agree with Rich's review; an excellent disc of a disturbing and entertaining film. Young viewers who only know Miss Lansbury from Mr Poppers Penguins will be pleasantly surprised at what a stunning beauty she was 70 years ago.
Reactions: RMajidi
You must log in or register to reply here.