A gothic series that's as macabre as American Horror Story though with less unwieldy storytelling and utilizing classic characters from the canon of Victorian horror tales mixed together with new creations in most entertaining fashion, Showtime's Penny Dreadful is an involving if something less than subtle chiller. Juggling a handful of storylines and acted by a sterling cast of first-rate talent, Penny Dreadful with its stories where science and the supernatural walk hand-in-hand takes a praiseworthy place among television's current preoccupation with horror programming. 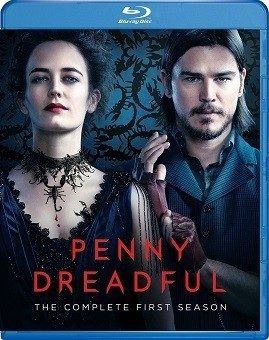 Oscar-nominated writer John Logan combined real people and imaginary characters in fashioning the enchanting Hugo for the big screen, and now he’s mixed literary characters from several Victorian classics along with some newly invented creations to take part in a series of adventures set in 1891 for his new television series Penny Dreadful. Basically this season he’s retelling a version of the Dracula legend by Bram Stoker without using that particular name but going about it from the point of view of the hunters rather than from the vampire himself (whose presence is keenly felt but who takes only minimal part in most of the episodes). Yes, Abraham Van Helsing (David Warner) is around for a couple of installments, but his investigation into the lurking evil in London takes a back seat to the work of Sir Malcolm Murray (Timothy Dalton) whose daughter Mina (Olivia Llewellyn) has become one of the creature’s supposed victims. To aid him in his search for his beloved child, Murray has contracted American sharpshooter Ethan Chandler (Josh Hartnett), Mina’s childhood best friend (who holds a special connection to Mina) Vanessa Ives (Eva Green), and Dr. Victor Frankenstein (Harry Treadaway). Yes, the good doctor from the pen of Mary Shelley is also added to the list of hunters though each of these three individuals has his own subplots that carry through the first season’s entire run. Chandler is coping with the struggles of his prostitute mistress Brona Croft (Billie Piper) who’s dying of consumption, Frankenstein has not one but two creations (Alex Price, Rory Kinnear) who require his attention, and Vanessa is attempting to endure and somehow conquer demonic possession. And passing into and out of the lives of the various characters in the narrative is celebrated hedonist Dorian Gray (Reeve Carney).Though it might seem on the surface that the mixing and matching of these disparate characters might make for a cluttered series (and sometimes the Dorian Gray interludes do seem to take valuable time away from more compelling plots), Logan and his staff writers actually keep things bouncing along while doing a deft balancing act with all of the various storylines. Frankenstein’s troubles with his creations are by far the most interesting of all the plotlines in the first season. In fact, the two episodes with his second creation he calls Proteus are heartbreaking and anything but chilling though they climax in a most shocking way, but the appearance of his first design who makes striking demands on him and who has his own storyline in yet another subplot that takes place at a Grand Guignol-themed theater rivets the attention through all eight of the first season episodes.Because the three fictional origin stories were all Victorian thrillers of their era and have been adapted for television with the macabre in mind, there is definitely plenty of violence and gore that make the series not for the faint-hearted (the sexuality is also quite unbridled and viewers should be open for anything). The first episode that takes us through a vampire nest is a hair-raising bit of torturous enjoyment, and there is lots more blood spilled over the course of the next seven episodes. If the demonic possession episodes for Vanessa near the end of the first season go on a bit too long (to the point of exhaustion frankly), they’re about the only misstep in an otherwise gripping group of stories that offer us background on many of the characters (or in the case of Chandler, promises of some eye-opening information to come next season). The acting throughout is superb with special mention going to Harry Treadaway’s often tender Dr. Frankenstein, Eva Green’s Vanessa (who must have spent many torturous hours acting the possessed and hard-edged Miss Isles in those exorcism episodes), Timothy Dalton as the haunted Sir Malcolm (his best work in a long time), and Rory Kinnear’s original Frankenstein’s monster with his wonderful mix of menace and misfortune.Here are the eight episodes contained on three Blu-ray discs in the first season set:1 – Night Work2 – Séance3 – Resurrection4 – Demimonde5 – Closer Than Sisters6 – What Death Can Join Together7 – Possession8 – Grand Guignol

The program’s widescreen television aspect ration of 1.78:1 is faithfully rendered in these 1080p transfers using the AVC codec. There’s a cinematic quality to much of the look of the series that combines sharpness in interiors to a somewhat softer look outside (one suspects it’s to more seamlessly join live action with CGI backgrounds). Color has been desaturated somewhat in much the same manner as is done on Ripper Street which takes place during the same era. Thus, skin tones look a trifle bloodless even on the living though there can be decent color depth in Dorian Gray’s salons, for example, or in certain interiors of the explorers’ club where Sir Malcolm occasionally goes. Contrast likewise varies depending on the needs of the storytelling, and with that black levels rise and fall accordingly. The episodes have been divided into 7 chapters.

The Dolby TrueHD 5.1 sound mix is as aggressive and impressive as any on American television. Abel Korzeniowski’s jarring, jangling, and yet ingratiating music is given a terrific spread through the entire soundstage, and there are frequent split effects and pans which put the viewer in the center of the activity on screen at all times. Dialogue has been well recorded and has been placed in the center channel.

Ray Donovan Episodes 1 and 2 (1:50:15, HD) the disc offers the first two episodes of another Showtime series.Production Blogs (HD): a series of eight brief vignettes which offer background information on the series.

Penny Dreadful might not be for the faint-of-heart, but it’s a bloody good gothic thriller series with excellent performances and a masterful period evocation that quickly draws the viewer into its strange and alluring world. The series has been renewed for a ten-episode second season which will continue many of the subplots which were not wrapped up at the end of season one. Recommended!

Cant wait for this to release! Been anticipating since its premier on network! Have no cable, so had to wait for it on dvd !! Thank you for your review
A

Ok! Recently finished watching it! My personal rating is about 3 1/2 stars! Not a bad production! Anticipating the 2nd season just to see what direction will the show take as far as the classic charactersOverall not! bad! Did not love it, but it wasn't bad! Enjoyed it a little bid better than American Coven
You must log in or register to reply here.