Spoilers aside, Will Forte may be playing the title role in The Last Man on Earth, but he most definitely isn’t the last man on Earth, nor is the planet lacking any women either. In Fox’s successful mid-season comedy, the humor derives mainly from the nutty and unpredictable things people do when they’re challenged by what life throws their way. After a strong start, the series becomes much more predictable as additional people begin showing up and man’s true natures of jealousy and lust begin to take over. There is still lots of comic potential to be gleaned from the show, and with the first season finale, it looks as if there may be something of a reboot in the works for season two. 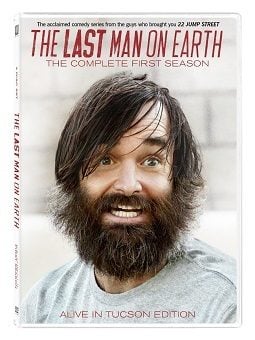 In the year 2020, most of the world’s population is wiped out by an unnamed virus, and Phil Miller (Will Forte) seems to be the last human left alive. He spends two years traveling around America looking for signs of life and leaving spray painted alerts everywhere he goes informing any potential survivors that he’s “Alive in Tucson.” He tries to make a go of it alone living the life of a person without a care in the world, but loneliness begins to get the better of him, and he decides to end it all. That’s when Carol (Kristen Schaal) comes barreling into his life. She’s not exactly his ideal woman: she’s plainer than the girls he normally dated, she’s strictly a rule follower and completely pragmatic about living in this new environment, and she insists on their being properly married if they’re to begin repopulating the planet. Phil goes along to humor her, but their wedding is barely over before a new face enters the picture: another survivor Melissa Shart (January Jones) who is Phil’s dream woman. The trouble is, he’s now married to someone else. And Melissa is only the first in a series of surprise arrivals that occur during the show’s thirteen-episode first season.

The earliest episodes are certainly the funniest as Phil’s slovenly ways and complete disinterest in preserving the natural landscape make for a hilarious succession of sight gags. He also does Cast Away’s Tom Hanks one better by making a village of drawn-on orbs with which to converse (a sight gag which is milked for much humor throughout the season). Phil’s lack of certain scruples (though there is the milk of human kindness buried deeply within only viewed a few times over the course of the season) including the inability to tell the truth in crucial situations and manipulating circumstances for his own advantage (and which ALWAYS backfires on him) make for a great number of predictable outcomes as the season progresses. It’s admirable that the writers don’t try to rehabilitate Phil midway through the season and turn him into a boy scout (there are other characters who play that role), but his continual lying, cheating, and misrepresenting during the season wears thin by the end of the season especially since almost every episode revolves around his lies as he attempts to get the things he wants through interaction with the various other survivors. If the season has a serious flaw, it’s that more episodes with each character needed to be shot before someone else joined the cul-de-sac. It seems like lots of comic possibilities were sacrificed to get new faces on the screen in a shorter amount of time.

Will Forte earned an Emmy nomination for his performance as the wheedling, conniving, and manipulative Phil Miller: one of the least admirable leading men currently on television (it’s to the actor’s credit that he can still summon audience sympathy despite his character’s sometimes cruel, thoughtless behavior; the fact that he never triumphs with his schemes probably helps). Kristen Schaal is full of quirks and a nasally whine which may be initially off-putting, but she and the rest of the actors who pop up during the season aren’t explored in nearly the depth of Phil and emerge as almost too good to be true. The best character of the other suvivors is Todd played by Mel Rodriguez, an overweight teddy bear of a man who likewise succumbs to jealousy and spite when his romantic life seems to be heading south. January Jones, Cleopatra Coleman, Mary Steenburgen, and Boris Kodjoe all contribute to the fun of the season, much of it happening at the bungling Phil’s expense.

Here are the thirteen episodes contained on two DVD discs in the set:

The program’s 1.78:1 television aspect ratio is presented in widescreen transfers with anamorphic enhancement. Sharpness is pleasing without being razor-edged, and color is likewise solid but not sensational. Contrast has been consistently achieved while black levels are good but not exceptional. Each show has been divided into 6 chapters.

The Dolby Digital 5.1 sound mix matches the broadcast quality of the programs on Fox. There isn’t a great emphasis on surround activity with Mark Mothersbaugh’s background music the major inhabitant of the rear channels. Dialogue has been well recorded and has been placed in the center channel.

Audio Commentaries: the first and last episodes of the season are commented on by stars Will Forte and Kristen Schaal and producers Christopher Miller and Phil Lord. The four have a good time together talking about aspects of the two programs that they remember, pausing occasionally to let favorite lines slip in.

Deleted Scenes (1:05:52): fifty deleted scenes are spread across the two discs in the set, arranged in montage form.

The Last Man on Earth Q & A Panel (22:51): stars Will Forte and Kristen Schaal and producers Christopher Miller and Phil Lord take part in a panel discussion at Deadline Hollywood’s Awardsline-Com in 2015. Dominic Patten hosts.

Survival of the Funniest: Creating The Last Man on Earth (11:37): the stars of the first season (it isn’t clear that any of them apart from Forte and Schaal will be returning for season two) and producers Christopher Miller and Phil Lord discuss the genesis of the series and express their mutual admiration for all of the show’s paricipants.

A funny series that has some heart about it, The Last Man on Earth earned good enough ratings to get itself a second season. One hopes that the producers will trust their inspired two leading players and let them carry episodes longer in season two (it’s suggested in a coda that Jason Sudeikis may be around for season two) before introducing other forces they must face in their survival operations.