William Friedkin’s poorly titled but riveting adaptation of Georges Arnaud’s novel Le Salaire de la peur (The Wages of Fear) debuts on Blu-ray in an effectively barebones release, but a first rate high definition transfer of this once overlooked cinematic gem more than makes up for any shortcomings in the special features. 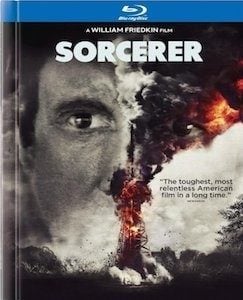 Four outlaws – Jackie Scanlon (Roy Scheider), a New Jersey thug with a price on his head; Victor Manzon (Bruno Cremer), a French investment banker accused of fraud; Kassem (Amidou), a Mid-East terrorist wanted for a Jerusalem bombing; and Nilo (Francisco Rabal), a professional assassin – hit rock bottom when they’re forced to flee their respective countries and wind up in the squalid South American village of Porvenir, subsisting through odd jobs or the cheap wages offered by an American oil company operating in the area. When terrorists sabotage the company’s well, setting it ablaze, it presents the four men with a rare, but potentially deadly, opportunity to leave the village. In order to staunch the oil fire, the company needs explosives, but the closest supply of nitroglycerin is over 200 miles away and can only be transported by truck. The company foreman Corlette (Ramon Bieri) offers a sizable cash payment for experienced drivers and settles on the four fugitives. Making their way through a harrowing gauntlet of challenges, from barely drivable mountain roads and bridges to gun-wielding bandits, the risks hardly seem worth it, but desperation and nothing to lose can make men do just about anything.Viewed by director William Friedkin as another adaptation of Georges Arnaud’s novel Le Salaire de la peur (The Wages of Fear), as opposed to a remake of Henri-Georges Clouzot’s 1953 French film of the same name, Sorcerer should have done a lot better than it did when it came out in 1977. At the very least, it shouldn’t have been so readily forgotten (I’d never even heard of the film until the Blu-ray press release went out), but since it came out a mere month after Star Wars blasted its way into theaters, it’s easy to place the blame on the film credited for irrevocably changing the economics and expectations of the Hollywood film industry. Personally, I think Sorcerer’s title was more the problem, not only because it needlessly tried to capitalize on Friedkin’s Exorcist credentials, but because it makes little sense even within the context of the film – it’s the name painted on one of the trucks, but not even what’s considered the lead vehicle (try explaining that one to a potential moviegoer). Friedkin, rightly, sees the film’s box office failure as a combination of the Star Wars phenomenon, the poor choice of title, as well as his own self-involved behavior that made it hard for the studio to stand behind him when things got rough.Fortunately, time is a great healer and the fact it was a box office flop in 1977 only makes for a more interesting, underdog kind of backstory. Regardless of its history, the film holds up as both a riveting adventure thriller and uncompromising statement about the immutability of fate, thanks, for the most part, to a rather stunning ender. Scheider and Cremer also turn in unwavering performances that more than sell the depths of their characters’ loss and want, making the film probably too dark and grim for some sensibilities. For everyone else, though, Sorcerer makes for one hypnotic piece of filmmaking.

Framed at 1.78:1 (a slight modification from its original 1.85:1 aspect ratio) and presented in 1080p with the AVC codec, the transfer boasts deep blacks and an uncompromised range of contrast. Colors are deep and accurately rendered, particularly in the jungle scenes where greens exhibit an incredible level of saturation. Fine object detail holds up from close ups to wide shots and the image bears a healthy and natural grain structure. Scenes where light levels are more limited exhibit some muddiness in the shadows, but I suspect those problems are inherent to the source.

Dialogue in the 5.1 DTS-HD Master Audio track is consistently crisp, clear and intelligible, though thicker accents may require engaging English subtitles. Surrounds are used in moderation, providing support for the Tangerine Dream soundtrack and filling out the space during rain storms and crowd scenes. LFE is non-existent, but a few key explosions extend to reasonable and satisfying depths.

Warner Home Video delivers an outstanding HD presentation for Sorcerer, director William Friedkin’s unfairly disregarded film about loss, desperation and fate. The special features are limited to some printed material, but considering how long the film was forgotten, if not effectively abandoned, there should be few complaints about a feature-only release actually hitting the market.

Thanks for this review.

Received my copy earlier this week. Have yet to find time to sit and
watch it. Hoping this weekend.

From reading your review, and the comments posted in the press release
thread, it looks like they did the impossible in making a questionable source
look fantastic.

Looking forward to watching this blindly.

The old dvd released in 2000 was barely watchable and full frame with a soft image. One of my favorite Friedkin films and it's too bad there are no extras or commentary because there are alot of stories behind the making of the film.

The back of the Digibook has a full ad promoting Friedkin's memoir. First time I've seen such a thing printed directly on packaging. I'm assuming they didn't want to lose purchasers of the book who might opt for Blu-ray special features instead.

Thanks for this review, Cameron. I was really looking forward to reading a review here and hearing others thoughts on this one. I think we saw the film and the video/visual presentation in the same way in this case. It is a gorgeous looking image and appeared, at least on my screen as an explosion of deeply saturated colors. One thing I would note about this is while the world around these men is filled with splashes of color they are all dressed in drab and muted colors. This seems an intentional choice and the vibrant green of the jungle seems to be swallowing them up.

The film itself is as riveting as a motion picture can get in my opinion. The tension just drips off the screen and the images of these two trucks moving through the jungle and the obstacles they encounter are flat out fantastic. I hope more people discover this film thanks to this blu-ray because this is a fabulous piece of filmmaking.

Thanks, Cameron, for the review. I've been somewhat of a fan of this movie since I first saw it on HBO back around 1980 or so. Through I've witnessed all prior attempts at home video (even buying the 1999 DVD to eek out a tiny bit more resolution than the LaserDisc!), I'd never been able to see the movie in it's wider-screen format. So seeing this opened up wider has been a revelation, to say nothing about the increased resolution and detail, and not to mention the brilliant colors.

We live now in an age where extremely good DVDs are incrementally improved upon in the high-res Blu-ray format. SORCERER has travelled an impressive distance between those two formats.

I pride myself on having seen nearly every "good" movie ever made, including many foreign films. And yet, I was only introduced to "Sorcerer" a few weeks ago when I read a review of the Blu-ray by John Nolte on Breitbart.com. What a pleasant surprise! This is a great fil, very well acted and superbly crafted. I agree with comments Friedkin made that casting Roy Scheider in the lead was a mistake. I love Scheider's work, but he's content being a supporting actor. Imaging if Friedkin had gotten Steve McQueen as he originally wanted.

If you've never seen this film, reserve a rainy Sunday on the couch and enjoy. The rope bridge scene is breathtaking.
T

Friedkin's Sorcerer is a sublime movie.

First of all, the Blu print is gorgeous...it's definitely like seeing the film for the first time. Superb PQ & color...the green forest scenery was especially vivid; even the scenes during the downpour (as the trucks were driving over the rickety bridge) were quite clear. Those who were responsible for cleaning this picture up for this Blu print deserve a medal. This is definitely one of my all-time favorite Blu's of a '70's film, and is right up there with the Taxi Driver Blu.

The soundtrack by Tangerine Dream was astounding...I like their music in anything, but it especially worked here.

Re: the inevitable comparison to Wages of Fear, I did see that film and, to be honest, it doesn't hold a candle to the brilliance of Sorcerer. I feel Friedkin's film was much more intense & well done. Though, granted, I'm biased towards '70's films anyway since it's my favorite decade for cinema.

I thought it was great to see the beginning sequences which explained why these four guys ended up living in a hell-hole at the end of the earth, and why they were down on their luck/desperate enough to take the extremely dangerous job of transporting dynamite. The extreme contrast between the various urban areas (New Jersey, Paris, etc.) in the beginning to a s%$&%$ in the middle of nowhere was quite pronounced...This exposition was missing from the WOF; as far as I can remember, there wasn't a back-story for the characters in that film.

Also, the ending scenes were incredible:

-Great scenery when Scheider was driving through the canyons towards the end; the purple dusk sky in the background was stunning.


The final scene of the film was truly brilliant - liked the unexpected downer of having Scheider about to get away with the $, then having the taxi pull up outside of the cantina with the mob guys who were after him...after they went into the cantina you knew he was a goner.
I wonder why this film didn't do better in the theater? Possibly because, as Friedkin himself says, it came out around the same time the original Star Wars hit theaters, and nothing much could compete with SW at that time.

Also note: Prior to seeing this great Blu print of the film in 2014, I had seen a horrible pan & scan piece of crap DVD that came out in either the late '90's or early 200X's. Terrible print with awful PQ. So, if this is the only way you've seen the film - note that the Blu is incredible, and shouldn't even be compared to this earlier print. I.e., don't let your opinion of the film be affected by the sub-par DVD.
Last edited: Apr 5, 2019

I hadn't even heard of this film until a few years ago. I stumbled on an article about Wages of Fear and it referenced the Friedkin film. I bought the bluray based on some reviews I read afterwards and was completely blown away by it. One of my favorite films of the 1970's for sure. The colors, as mentioned above, are beautiful and the image is crystal clear. I particularly love the tragic beauty of the explosion and resultant fire with its brilliant oranges and reds agains the green backdrop of the rainforest.
You must log in or register to reply here.