A Biblical epic lacking in the size, scope, and technical skill of Hollywood productions such as those mounted by Cecil B. DeMille, Robert Aldrich’s Sodom and Gomorrah takes potentially juicy source material and stretches it out sometimes to tediously unfocused and badly written proportions. There are moments of excitement in the staging of big scenes, and there are characters who in more talented hands might have captured the gaudy fascination that melodramatic Hollywood epics have provided, but the ultimate product of the time and money here is an overlong movie with too few high points to justify its length. 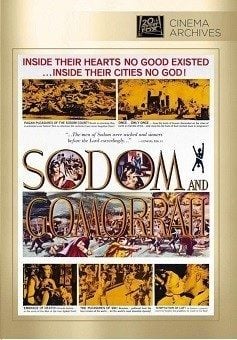 When the Hebrew tribe splits off into two separate groups, the group being led by Lot (Stewart Granger) struggles in the desert but finally makes it to the shores of the Jordan across the river from the evil twin cities of Sodom and Gomorrah. The Queen of Sodom Bera (Anouk Aimee) makes a deal with Lot which allows his tribe to live in the area and do with it as it will without molestation from her soldiers for a period of seven years provided she’s paid a certain amount of money by the end of that time. With his wisdom and guidance from Jehovah, Lot is able to pay off his debt much sooner than expected thwarting plans the Queen had in controlling this new tribe in her province. But the Queen’s scheming brother Astaroth (Stanley Baker) has his own agenda seducing both of Lot’s daughters Shuah (Rossan Podesta) and Moleb (Claudia Mori) and agreeing with the leader of the nomadic warrior tribe the Helamites to assist him in conquering the Hebrews. When they’re attacked, the Hebrew women and children are sent inside the Sodom city walls while the men have several elaborate booby traps lined up for just such an event. The Hebrews are successful in defeating their enemy, but with their land ruined, they must seek solace within the wicked city’s walls where temptations galore await them.

The screenplay by Hugo Butler and Giorgio Prosperi isn’t as full of incident as a two-and-a-half hour running time might suggest, and instead of character development, we get mostly clichéd character types (the scheming brother lusting for power, an unbelieving slave girl who resists faith despite plenty of evidence to the contrary, easily waylaid peasants, an arrogant ruler who can see faults in all but herself) that offer little or no development for the actors and little or no growing interest for the viewer. There are some exceptions: the character of Lot certainly does experience inner growth as a result of his experiences in the film, and there’s development in the character of Ildith (Pier Angeli) from haughty slave girl proud of her looks and silken finery to the loving but overconfident wife of the tribe’s commander (though her pride and lack of faith, of course, lead to her downfall). And director Robert Aldrich stages the attack of the Helamites in the Jordan River valley with its decent number of surprises and the mounting action skillfully even if the special effects don’t always live up to his efforts. The eventual destruction of the city is a combination of unconvincing models and live action, fairly unimpressive as these things go. But those expecting to see any number of carnal delights or forbidden passions indicative of the “Sodom and Gomorrah” legend are in for a most disappointing viewing experience: there’s some tame slave girl dancing and a few mild glimpses of tortures on display (a spike studded breastplate, slaves covered in oil being burned to death, occasional human whippings and brandings). One must remember that the Production Code was still in force in 1962 keeping a lid on any vicarious sexual or sadistic thrills which might be found if the film were being made today.

Stewart Granger gives by far the most accomplished performance in the movie taking Lot through an arresting array of emotional peaks and valleys until he eventually leads his people out of the sinful cities. As Ishmael, Lot’s second-in-command who never loses his faith and is disappointed to see his mentor give in to the cities’ excesses, Giacomo Rossi Stuart makes a striking impression in an underwritten role. Stanley Baker rather overdoes the villainy as the Queen’s notoriously amoral brother, but at least he goes along with the over-the-top mood of the character and doesn’t stint on performing it. The ladies, on the other hand, are less comfortable in their characters’ skins. Struggling with speaking in English, French actress Anouk Aimee seems stiffly authoritative as Queen Bera, but like Stanley Baker does seem to succumb to the character’s haughty demeanor and eventually offers an acceptable performance. Pier Angeli offers a stiff, prickly performance as Ildith. As Lot’s two daughters, neither Rossan Podesta nor Claudia Mori rise above the mundane.

This is one of the Fox Cinema Archive transfers that hits almost the bottom of the barrel. The film was originally presented in 1.85:1, but this 1.33:1 presentation isn’t the open matte frame with loads of headroom. Rather, it’s a weirdly zoomed in and then cropped image with characters often cut in half on either side of the frame and yet sometimes still with ridiculous amounts of headroom showing! Likely scraped from the back of the vault as a laserdisc transfer (it does appear sharper than an ancient VHS transfer might be), this image is loaded with specks, debris, an occasional scratch, and damage. Color runs the gamut from fairly strong and solid with natural skin tones to chalky, pasty flesh tones with washed out, dated looking or milky color and with some false contouring in some backgrounds. Black levels are not very deep. The film has been divided into 16 chapters.

The Dolby Digital 2.0 sound mix is decoded by Dolby Prologic into the center channel. While the volume level is set higher than it should be, it’s not quite at the system-threatening levels that other Fox Cinema Archive titles have been placed. Dialogue is always easily decipherable, and the continual music of three-time Oscar winner Miklos Rozsa (who had won one of those awards for another Biblical epic – Ben-Hur) and the bombastic sound effects work well together in the single track. There is some occasional hiss present in the encode, but it’s not distracting. The sound quality, however, is occasionally hollow and lacking in bass, likely due to the less than huge budget afforded the movie.

Theatrical Trailer (5:05, SD): presented in non-anamorphic letterbox at 1.85:1, this extended trailer (which zooms to perfect proportions on a widescreen display) gives a much better idea of what the proper imagery of the film should be had there been a decent quality video element on hand.

Even for fans of the Biblical epic Sodom and Gomorrah, this is not the disc you want to own. The image quality is so compromised by the weird, chopped-off framing that it’s more a torment than a pleasure to watch. This one is purely coaster material.

Ouch! It sounds like I could burn a superior DVD from my letterboxed laserdisc.

There are times when you need a reply that's so much stronger than "No sale!".

What could it be?

I've always liked the film since seeing it on first theatrical release and have long hoped that a decent version would be released on disc. This "no effort - couldn't be bothered" version is a slap in the face from Fox.

Yeah I don't think this is a Laserdisc Transfer more likely a VHS master that was never released. I have the Laserdisc and its letterbox and was a very good transfer for the time.

They used an open matte transfer when a letterboxed one exists as well? Cheap.

On a second note, I had no idea Robert Aldrich, the same man responsible for What Ever Happened to Baby Jane? and The Killing of Sister George, made this film.

Disappointing. Why bother, with a technical presentation such as this, you have to wonder. They must've released it for the title hunters that still watch movies on their 19" CRT televisions. Would you want to present this in your home theater? Not me.

A piece of garbage DVD of a film I really liked and naturally bit for, unfortunately, and these Fox Archives titles aren't cheap! The German release is SO much better (but not great by any means). Sad.

Ed Lachmann said:
A piece of garbage DVD of a film I really liked and naturally bit for, unfortunately, and these Fox Archives titles aren't cheap! The German release is SO much better (but not great by any means). Sad.
Click to expand...

I know; I really commiserate with the fans of the movie that have waited so long for this to come out in the US and THIS disc is what they get. I know it's heartbreaking AND infuriating when it should be a simple matter to transfer a decent video master for a movie onto a disc. And if there was no decent video master for it, then strike one OR don't issue the disc.

is there no way to reach the people at Fox Archives about such aborted releases?? Superior releases of Fox films continue to be released in other countries but here in the US where these films were produced we have no luck.

Sorry to resurrect an old thread, but I just watched this thru Classicflix (glad I didn't buy it). This film demands a proper release! The appearance of this DVD was basically the same as when I saw it the first time on a UHF station on a 19" CRT in the mid '80s!

Scroll down to the Cinesavant Column for some "Explosive" Blu-ray news: https://cinesavant.com/?fbclid=IwAR16cqR6VeM7bVrbyDoORLpEFaSBs8LqVcYIYdaLFgMYYhEkgJEG8IX4Q2E

Bob Cashill said:
Scroll down to the Cinesavant Column for some "Explosive" Blu-ray news: https://cinesavant.com/?fbclid=IwAR16cqR6VeM7bVrbyDoORLpEFaSBs8LqVcYIYdaLFgMYYhEkgJEG8IX4Q2E
Click to expand...

Thanks so much for sharing this interesting news. Fans of the stars, director, or film will be beyond excited!
You must log in or register to reply here.