Hitler's Madman is a fascinating semi-fictional account of the assassination of Reinhard Heydrich, one of the most notorious Nazis in the German Army. He was the Deputy/Acting Reich-Protector of Czechoslovakia, where his penchant for executing civilians earned him the nickname "Hangman." This 1943 film, the first American directorial effort by Douglas Sirk, was released by MGM and is now available from the Warner Archive. 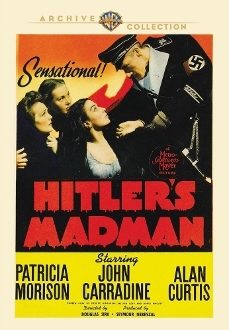 How did the year turn–how did it run
In the year of nineteen-forty-one?–
In a village called Lidice?
First came Spring, with planting and sowing;
Then came Summer, with haying and hoeing:
Then came Autumn, and the Harvest Home…
Then came Heydrich the Hangman, the Hun…

- "The Murder of Lidice" by Edna St. Vincent Millay

Lidice is a village located 25 kilometers northwest of Prague in what is now the Czech Republic. Karel Vavra (Alan Curtis) is a Czech patriot who fled to Great Britain when Germany occupied his country. He returns in 1942, parachuting into Czechoslovakia near Lidice, where he grew up and where he hopes to inspire his countrymen to form a resistance movement. His initial overtures to the leading citizens of Lidice are rebuffed due to fear that they will be discovered by the Gestapo. Indeed, early on the only person who supports Karel is the love of his life, Jarmilla Hanka (Patricia Morison). Jarmilla initially fears for his life and encourages him to return to Great Britain, but his determination and bravery wins her over.

Attitudes begin to change as the methods of the Nazi leader Reinhald Heydrich (John Carradine) become more ruthless and vicious. A committed anti-intellectual, Heydrich shuts down the university in Prague. The male students are conscripted to fight on the Russian Front and the females are forced to become "entertainers" for German soldiers. Anyone who protests is subject to immediate arrest and execution. Karel explains to the men of Lidice that they can fight machine guns and artillery by committing acts of sabotage. The final straw occurs when Heydrich murders the local priest, an act which causes Jarmilla's father, Jan Hanka (Ralph Morgan), to plot Heydrich's assassination.

Hitler's Madman reportedly had the original title "Hitler's Hangman," but it was changed when Fritz Lang's film Hangmen Also Die!, which depicts the same events, was released first. John Carradine is excellent as Heydrich, portraying him as cold-blooded rather than a maniac (as the title implies). Alan Curtis is sincere but not particularly charismatic as Karel. Patricia Morison is believable as the young woman who overcomes her initial fears and decides to risk everything by supporting Karel's resistance efforts. Look for Ava Gardner in an unbilled role as a young Czech woman named Franciska Pritric.

The film does not shy away from depicting Hitler's reprisals against the people of Lidice after Heydrich's death, reprisals which may have been the most notable Nazi atrocities of World War II until the extent of the Holocaust became known. The Lidice reprisals inspired the Edna St. Vincent Millay poem which is quoted above.

Hitler's Madman is correctly framed at 1.37:1. The picture quality is very good, with just occasional speckles which are not terribly distracting. The print is otherwise free of damage. Detail is generally sharp, contrast is fine, and black levels and grayscale are good.

The Dolby Digital 2.0 mono soundtrack is as good as one could expect. The dialogue is clear and always understandable. The score is unexceptional but is free of distortion.

The only extra on this MOD DVD-R is the film's original theatrical trailer. It is a bit rougher and grainier than the feature, but it is intact and is certainly watchable. For those who do not know the details of what happened to Lidice, the trailer pretty much gives it away. This would not have bothered filmgoers in 1943, who would have been well aware of what occurred.

Hitler's Madman was released by the Warner Archive at the same time as Hitler's Children, and together they are good examples of the kind of anti-Nazi films which Hollywood was releasing during World War II. Those who are interested in the subject matter might want to seek out Hangmen Also Die! as well, as it was written by a German (Bertolt Brecht) and an Austrian (Fritz Lang) and provides a different perspective.

I live across the street from a Lidice memorial in a heavily Czech-Slovakian settler community (erected and have done so for years in addition with being 1/4 Czech myself, so the subject matter came as a bit of a shock when I watched it.


One thing of note is that this film has its fair share of black comedy, much delivered by John Carradine. Also disappointed at the lack of mention of the late, great Edgar Kennedy in an interestingly comedic role as a selfish "outsider" of the community.