Producer-director Cecil B. DeMille dipped his toes back into the biblical waters once again with Samson and Delilah, another big budget pageant of Christian and pagan excesses which proved such a success that another biblical epic was inevitable (the blockbuster The Ten Commandments which came along six years later). Here, the visual spectacle isn’t quite so grand as it would be later, and the film is way overlong and talky for the few action set pieces which distinguish it. But there are stars to be seen and glorious Technicolor to provide recompense for the rather dull, long-winded story. 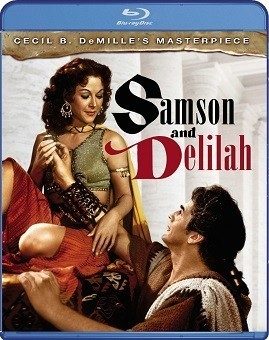 The Danites are being crushed under the yoke of the oppressive Philistines, but their champion warrior Samson (Victor Mature) doesn’t fear them, and he even lusts after one of their beauties, Semadar (Angela Lansbury). When he destroys a rampaging lion with his bare hands and then further proves his strength in front of the Saran of Gaza (George Sanders), he is allowed to choose his reward, and his choice is Semadar even though her younger sister Delilah (Hedy Lamarr) had actually been the one to champion Samson to the Saran and feels humiliated when he doesn’t choose her for his bride. The scheming, vengeful Delilah manages to ruin the wedding day of her sister, and when Samson declares his hatred for the Philistines and later defeats their army with only the jawbone of an ass as his weapon, it’s Delilah who vows to learn the secret of Samson’s power so the Philistines can bring him down.Based on the stories in the book of Judges, the screenplay by Jesse L. Lasky Jr. and Fredric M. Frank features a great deal of talk surrounding the film’s four major set pieces: Samson’s defeat of the lion, Samson stopping the army, Delilah’s torturous road to learning his secret with the world’s most famous haircut, and the inevitable climax in the temple. Cecil B. DeMille’s direction is straightforward and unfussy with all of these events (some of the violence is curtailed, of course, due to the Production Code in effect at the time), but it’s also rather uncreative and stodgy since the long-winded script drones on and on past the two-hour mark. And this being a DeMille production at Paramount, most of it is decidedly studio bound as was the custom of the time. Even the great outdoor encounters with the lion and with the army were actually filmed on soundstages (nighttime scenes with starry skies in the distance look particularly artificial). The climactic destruction of the temple nicely combines the special effects of the era with rapid pacing and quick cuts to give the movie a kick in the pants at the conclusion making it seem worth the wait to get to it. And, as was often the case with his latter day films, DeMille himself provides the narration.Compared to the über-muscular actors of today who play superheroes with ease, Victor Mature’s Samson physique doesn’t look all that great, but he was the reigning muscular hunk of the era and does surprisingly well with the emotional melodrama of the script he must act. And he’s eons better than Hedy Lamarr who spits and purrs rather stiltedly as the calculating Delilah (and who reads ludicrously false when she has a change of heart in the late stages of the movie). It’s also completely silly that the script makes a special effort to maintain that Angela Lansbury’s Semadar is her older sister when the two actresses appear separated by at least a decade but not in Lamarr’s favor. Despite her fourth billing, Lansbury’s simple, straightforward love interest doesn’t hang around but for the film’s first forty minutes, but George Sanders gets his due, and he gives probably the movie’s best performance as the Saran and not at all overacted as he might have done a few years later. DeMille veteran Henry Wilcoxon is his usual stalwart self, and Olive Dearing is lovely as the demure Miriam who carries a torch for Samson but never quite piques his romantic interest. In smaller roles, look for Russ Tamblyn, George Reeves, and Mike Mazurki making good on their limited amounts of screen time.

The film’s 1.33:1 theatrical aspect ratio is presented in 1080p resolution using the AVC codec. As with many Paramount Technicolor films of the period, the color is extremely lush with rich, deep hues throughout and deeply tanned flesh tones. Paramount color films of the period seemed less bright than those of other studios, so the picture quality might not quite seem to pop as in Technicolor transfers from other studios of the 1940s like Easter Parade or Meet Me in St. Louis where the images are unquestionably brighter. Sharpness in medium and long shots is outstanding though DeMille obviously insisted on glamour photography for close-ups which are slightly softer in appearance for the men as well as the women. Middling black levels are about the only complaint to be found here. Certainly color registration errors or age-related specks and scratches are never a problem. The film has been divided into 22 chapters.

The Dolby TrueHD 2.0 mono sound mix has a surprising amount of fidelity for a film from this era. Age-related artifacts like hiss or crackle never crop up, and the dialogue, sound effects (the temple destruction is especially impressive for a mono mix), and Victor Young’s wonderfully evocative score (the disc includes both overture and exit music) all share the track without intruding on each other’s turf.

Theatrical Trailer (2:04, HD): the re-release trailer for the film is what is presented here.

Winner of Oscars for its production design and costumes (and both unquestionably worthy of them), Samson and Delilah is a good old-fashioned Cecil B. DeMille biblical epic. It doesn’t have the eye-popping size and scope of his later The Ten Commandments, but for those who like his florid epic films with dazzling color and the star system working at its zenith, Samson and Delilah could hardly look or sound better.

I was blown away by how great the DVD looked and almost did not upgrade, but this Blu-ray gorgeous and I am glad I did. Now let's see a Blu of THE GREATEST SHOW ON EARTH.

I'm looking forward to watching this.

Agreed, De Mille's The Greatest Show on Earth needs a brand-spanking new hi-def transfer, digital restoration preferred. Another Oscar-winning Best Picture still MIA. Regarding Samson and Delilah...everything looks as it should. The movie pales in comparison to some of De Mille's other masterworks - not in the same league as The Ten Commandments or Cleopatra, or Union Pacific or The Crusades. It would be nice to have all of the aforementioned reissued in a box set of De Mille's work. It's frankly appalling how many iconic treasures are NOT represented comprehensively in hi-def.

DeMille for one: Wyler, Cukor, Wilder and Fleming are others. The list could go on and become endless, but I suspect the point has already been made. More classics on Blu-ray please! We who partake on these message boards (to say nothing of the vintage archival materials yet to be unearthed and see the light of day) are aging rapidly.