So, turn on the news today and it is all Russia, Russia, Russia...well, I have a real interest in taking a much deeper dive into Soviet and Russian cinema. Now, I am aware of and have seen the pictures that are widely available and praised here but I was looking to go beyond folks like Tarkovsky, Eisenstein, and Bondarchuk. So, I was hoping maybe there were people here with a much greater knowledge of Soviet and Russian cinema...perhaps lived there and experienced much more than I have when it comes to the cinema of the Soviet Union and Russian filmmakers.

Tarkovsky was really my introduction to Russian filmmakers when back in the 1980s I discovered Solaris and Stalker on VHS tape. They stood out in the science fiction section of the rental store because they were both housed in large duel tape boxes. I fell completely in love with these films. Along the way it seemed any time I would catch a film made by a Russian filmmaker I found them beautiful and fascinating.

Sadly, even though this was the case I never really pursued a further investigation of Soviet or Russian filmmaking other than the things that would pop up here and there. Well, I decided to change that and see what else was out there.

Now the big issue I found right off was it is hard to find versions of films that are not well known here that actually have English subtitles or an English language track. I don't read or speak Russian so sort of up the creek if there is not a release with subtitles or a dub I can understand.

So, are there any folks here that are into Soviet or Russian cinema (right now I am sort of interested in the period from 1960-1990) but any recommendations and information on films available with subtitles or English dubs would be greatly appreciated.

So, for some time I had heard and read about a film called The White Sun of the Desert. This is from what I understand, a very popular film and was voted by Russians one of their favorite films. Now, it is basically a Western but in this case they actually call it an "Eastern" or "Ostern" or some people just call it a Red Western. I had heard/read many times that this film was/is always watched by Russian cosmonauts before they would travel into space. That sounded very intriguing combined with the idea that it was influenced by Sergio Leone. It is beautifully shot in a desert with gorgeous architecture on display. It is available on both blu-ray (with no English or any other language spoken or available via subtitles) and DVD (in a version with English subtitles, an English dub that's not bad at all, and multiple other languages both spoken and subtitled on the disc).

I won't yet go into a review of the film but I am curious if others here have seen it, what they thought of it, and if they have recommendations for other "Osterns" as I found this a very fun film.

Sergei Parajanov's "Shadows of Forgotten Ancestors" (1964) is one of my favorite films of all time.
Reactions: Reggie W

Early in the 21st century, a company called Ruscico released through Image Entertainment a number of Russian fantasy films by Alexander Ptushko on DVD, including SADKO (1952) and ILYA MUROMETS (1956), both of which I recommend. I had seen both of these films in theaters as a child under their English dub titles, THE MAGIC VOYAGE OF SINBAD and SWORD AND THE DRAGON, so it was a thrill to finally see their uncut original Russian-language versions (with subs, of course). There were others in that series of releases including RUSLAN AND LUDMILA (1972), which came with a beautifully animated half-hour color short called "The Fisherman and the Goldfish." I've enjoyed the Soviet animation I've seen from the 1950s and '60s, including, of course, THE SNOW QUEEN, which I saw in an English dubbed version as a child and have a VHS copy of it, but I still have yet to see the Russian original. There were some box sets, "Masters of Russian Animation," also through Image Entertainment, but those were more arty, experimental or political shorts. I found some Russian cartoons on YouTube, including some that an Uzbek co-worker directed me to that were take-offs on old Warner Bros. cartoons with a wolf and a rabbit in constant conflict. The title of the series was "Nu Pogodi," which is translated as "I'll get you!," the wolf's tagline at the end of every cartoon They were lacking subs., but still quite funny without them.

From "The Fisherman and the Goldfish": 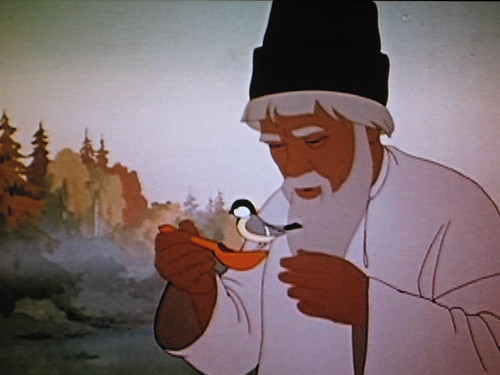