Named one of the top 25 cult TV shows of all time and winner of 22 Emmy Awards, Pee-wee’s Playhouse remains one of the most imaginative and creative series ever produced for Saturday morning children’s television. Shout! Factory, under series creator Paul Reubens’ supervision, has remastered the series in high definition, and this is the set fans have been waiting for. 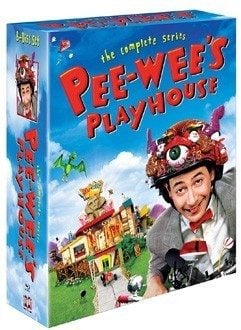 After the success of his Los Angeles stage show, The Pee-wee Herman Show (later recorded for an HBO special) and the Tim Burton directed feature film, Pee-wee’s Big Adventure, CBS offered Paul Reubens the chance to bring his iconic, comedic man-child character, Pee-wee Herman, to the small screen for a weekly Saturday morning children’s show. Reubens took his adult-themed stage show, toned down the innuendos, created some more kid-friendly characters, and amped up the imagination factor with a few life lessons thrown in for good measure to create Pee-wee’s Playhouse.The series ran on CBS from 1986 through 1991, producing a total of 45 episodes, as well as a prime-time Christmas special that first aired in 1988. The series would quickly achieve cult status among college students who would watch the show, many creating a drinking game where instead of cheering whenever the weekly “secret word” was mentioned, they would down a shot of liquor. But the real charm of the show was its intoxicating creativity and eye-popping set design and animation (which is even more appreciated in this remastered set), as well as its supporting cast of wacky characters (and, in retrospect, the actors that played them). The late, great Phil Hartman would reprise his stage role as Captain Carl, as would Lynne Marie Stewart as the always beautiful Miss Yvonne and John Paragon as the wish-granting Jambi the Genie. But keep your eyes open for Laurence Fishburne as Cowboy Curtis, Law & Order’s S. Epatha Merkerson as Reba the Mail Woman, Jimmy Smits as Conky’s repairman, Leslie Jordan as Busby, and Calvert DeForest (better known as Larry “Bud” Melman) as Rusty. Much of the stop-motion animation on the series was created by a team of animators that included Phil Trumbo (who directed the eye-popping opening title sequence) and Aardman Animation founders Peter Lord and David Sproxton (responsible for the Penny shorts).The creativity and imagination of the series would be kicked into high gear with prime time Pee-wee’s Playhouse Christmas Special, opening the show with a musical number performed by the UCLA Men’s Glee Club as the Marines, as well as other numbers performed by Grace Jones (“Little Drummer Boy”), Del Rubio Triplets (“Winter Wonderland”), k.d. lang (“Jingle Bell Rock”), Dinah Shore (“Twelve Days of Christmas”), and Charo (“Feliz Navidad”). Other guest stars included Whoopi Goldberg (being told by Pee-wee that he did not have room for her in this year’s special), Cher (asking Pee-wee and Conky what the secret word is), Magic Johnson (who turns out to be Magic Screen’s cousin), Annette Funicello and Frankie Avalon (demonstrating how to make your own holiday decorations and cards), as well as Little Richard, Zsa Zsa Gabor, and Joan Rivers.

As I had stated in my 2010 review of the Image DVD boxed set, “As with most television series produced in the mid 1980s, to cut costs the show was shot on film but post production was completed on standard definition analog video tape.” When it was first announced that Pee-wee’s Playhouse was going to be released on Blu-ray, I wondered if it was going to be a simple upconversion of the 480i broadcast masters (similar to Farscape) or if it was going to undergo a full remastering similar to Star Trek:The Next Generation. I’m happy (and relieved) to report that the latter is true. Shout! Factory has transferred the original film elements in 1080i and recomposited (and in many cases painstakingly recreated) the analog visual effects for all 45 episodes, including the one-hour Christmas special. While not quite at the same level as Star Trek: TNG, the results are still extraordinary, with the show never looking this good. The 1080i transfer, compressed using the AVC codec, retains the original broadcast aspect ratio of 1.33:1, and virtually breathes new life into the eye-candy this series was. Colors pop with vibrancy, and details previously lost in the analog 480i masters are front and center. The pattern on Pee-wee’s suit is clearly visible without that annoying moir pattern that plagued previous releases. The sets designed by Gary Panter have an added dimension to them, and the stop-motion animation segments no longer have a smeary look to them. Many of the segments featuring public domain footage (such as the classic cartoons and some of the chroma-key segments) were likely upscaled, as they appear somewhat soft (or at least the PD footage does while Pee-wee looks quite sharp). This is a major improvement over the Image DVD set.

Audio is presented in uncompressed PCM 2.0 at 2.3 Mbps, with the series in its original mono mixes and the special in its original stereo. Dialogue is clear and understandable, and the music score by Mark Mothersbaugh (of Devo) and a host of other guest composers (that included Danny Elfman, Todd Rundgren, Mark Snow, Dweezil Zappa) benefits from the wider dynamic range and higher fidelity.

This is the set that fans of the show were promised many years ago, with lots of interesting bonus content, and a major improvement in the video aspect of the series. Pee-wee’s Playhouse has never looked better, and highly recommended for fans of the show and its star, although Paul Reubens is noticeable absent from the new documentaries.

Missing from the boxed set, here is a piece of PR from Shout! Factory on the remastering process applied to Pee-wee's Playhouse.

Have fond memories of working in a video store in the mid 1980s and having
this show playing every Saturday morning across two dozen displays we had
on sale.

What a fun morning show. One of these days I'll buy this on sale and add it
to my collection.

I'm also a huge Pee-wee Herman fan and I'm hoping to pick this up right before I go on my 2 1/2 week vacation in January.
I plan on doing a mega marathon.

This is a good opportunity to tell my Pee-wee Herman story.

Five or six years ago Paul Reubens was one of the guests who appeared at the bi-annual Chiller Theater Expo in New Jersey. I brought along the jacket for my laserdisc of Pee-wee's Playhouse Christmas Special for him to sign. I've found that laserdisc covers are great for autographs because there is plenty of room for a signature.

When I got to the front of the line his eyes lit up when he saw the laserdisc. "A laserdisc!" he said. "I have lots of laserdiscs at home." We chatted for a minute and he then said, "Let me tell you my laserdisc story."

"A few years ago I was moving, and I hired some neighborhood kids to do some of my packing. One of the kids was in my TV room and he was packing my laserdisc collection.When he finished packing all of them, I went in to check on everything. He had done a nice job, and each box was carefully closed and taped. Then i noticed that he had labeled each box. Each one was marked "Giant CDs."

He and I had a good laugh over that.

Could anyone please confirm (with absolute certainty) what disc # the Christmas Special is on?

Edit: Nevermind - I was going to rent it through store-3d-blurayrental.com but their listings don't make any sense because I realized that each disc is numbered by season; ie. S1 disc 1-?, S2 disc 1-?, S3, disc 1-?, etc. 3d-br lists them only as discs 1-8, which is a pretty sure way of sending the incorrect discs unless one were to rent the entire set.
Last edited: Aug 28, 2016

As stated in my review of the special features, the Christmas Special is on Disc Five.

I love Pee-wee but, to this day, my favorite project of his is still 'Big Adventure' To me, nothing has come close to it.

The remake of the Roxy show a couple of years ago was a disappointment, and the recent cable TV special downright sucked.
You must log in or register to reply here.