An engrossing, existential mystery lies at the heart of BBC America’s instantly addicting new sci-fi drama, but it’s the amazing performance by the show’s lead actress that really sells the premise. No doubt the series looks its best on the Blu-ray format, but even if DVD were the only option, the show would still be recommended viewing. 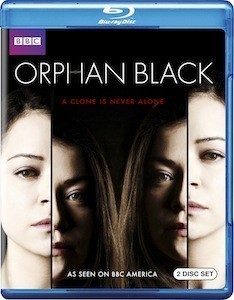 Sarah Manning (Tatiana Maslany) is back in New York City after 10 months of self-imposed exile. She’s returned for her daughter Kira (Skyler Wexler), who’s under the care of Sarah’s former foster mother Mrs. S (Maria Doyle Kennedy), but after Sarah’s string of poor choices, it’s not likely the only stable adult in Kira’s life will give her up so easily.

While en route to see her foster brother Felix (Jordan Gavaris), Sarah witnesses a woman kill herself by jumping in front of the train. Though disturbing on its own, that the woman looked exactly like Sarah makes the incident even more unnerving.

Intrigued, Sarah goes through the dead woman’s purse, getting her name – Beth Childs – and address. Visiting her home, Sarah sees that though the two may have looked alike, their styles and personalities could not be more different. Beth was American, well off, and professional; Sarah is...well, none of those things with her British accent, empty pockets, and punker wardrobe. After finding a bank statement showing a balance of $75,000, Sarah decides to swap identities with Beth to get to the money, but even though she proves a quick study in passing as her, she soon finds the other woman’s personal life catching up.

In short order Sarah learns Beth was an NYPD detective who recently shot and killed a civilian. She has to testify at a review board hearing on the incident, and her partner, Art (Kevin Hanchard), isn’t going to let her skip out on it. Beth’s live-in boyfriend Paul (Dylan Bruce) also shows up, further testing Sarah’s skills at improvisational deception and distraction.

Sarah also must deal with the loose ends of her former identity, namely how to convince her thug of an ex-boyfriend that she threw herself under a subway train, while keeping her daughter and Mrs. S none the wiser. Felix, her sole confidant, lays a lot of groundwork in that regard, but even with his help Sarah can’t keep the charade going forever without the truth eventually coming out.

Beth also appears to have been keeping a lot of secrets of her own, well beyond those involving her crisis at work. There’s the recently opened $75,000 savings account for one, but a safe deposit box with other women’s birth records and an unending series of texts and calls coming in to a second mobile phone points to a whole other life. As Sarah continues masquerading as Beth, she’ll soon learn why, but more critically that their resemblance to each other is more than just a coincidence, but the makings of a bizarre, existential mystery more easily dismissed than believed.

Though the pilot episode of Orphan Black sometimes gets mired in the personal drama of its main character, there are enough intriguing bits around the show’s central, sci-fi driven mystery to keep viewers coming back for more. As the season peels back the layers of an increasingly intricate conspiracy involving Sarah’s doppelganger Beth (and her subsequent associates), the show stands out for its ability to manage the growing cast of characters but, most critically, the casting of Maslany in the lead role (who herself looks like a Euro version of Alyssa Milano). To say more would be giving away too much, but for those who followed Joss Whedon’s Dollhouse, imagine if the show’s main actress had been someone with the acting chops to really give life to the characters she played from week-to-week. Maslany’s job is no less formidable, and she handles it with such incredible skill and subtlety, that it’s no surprise the Critics Choice Awards recently named her Best Actress in a Drama (though the lack of a 2013 Emmy nom is an outright travesty). Convincing visual effects and hair/makeup only further sell the outlandish premise, though by the last few episodes deviations from the central character and shifts in the narrative tone can make things less convincing. Maslany’s amazing performances, however, consistently ground the series, making it one of the most engrossing shows to come out in quite some time (and that isn’t on HBO or AMC). Fortunately, with only 10 briskly paced episodes in its first season, new fans won’t have to give up too much sleep to binge watch the series. The only downside is the empty feeling of withdrawal that reportedly won’t be remedied until sometime in 2014.

Orphan Black: Season One includes the 10 episodes that aired on BBC America between March and June 2013:

Framed at 1.78:1 and presented in 1080p with the AVC codec, the transfer features inky black levels and contrast that accurately displays the full range of values, even in the frequent nighttime settings. Colors are deep and nicely saturated and flesh tones appear true to life. Detail is especially impressive in facial close ups, but panoramic skylines and establishing shots also look sharp and well defined.

Dialogue in the 5.1 DTS-HD Master Audio track is consistently crisp, clear and intelligible, though the variety of accents in play sometimes requires engaging subtitles. Support for the score in the surround channels is balanced and seamless, as are the occasional environmental and directional effects. Bass activity is clean and nicely balanced with the other audio elements, though frequencies rarely reach LFE levels.

Send in the Clones (16:20, HD): The behind-the-scenes documentary includes interviews with series creators Graeme Manson and John Fawcett and members of the cast describing the inspiration for the series, primary characters and personal production experiences.

Insiders: Clips originally produced for online distribution provide background on a few of the main characters and reveal how a certain scene was shot.

One of the more engrossing, sci-fi series to come out in some time gets a great looking high definition presentation thanks to BBC Home Entertainment. The special features are perfunctory, but the strength of the series makes it one worth picking up regardless.

I sat through the first episode because it was on after Doctor Who, and I found that I started getting more excited about it than the next Who!

Great show! Picked up the Blu-ray!

This is a series I had some interest in from the premiere, but by the time we were at episode 3 or 4, it became a real weekly treat. Excellent performances and a great punchy story.

This is on my wish list. I've been hearing about it everywhere: The Incomparable, EW, and HTF.

I started watching from the second episode, which looked interesting at the time. (I missed the first episode at the time).

I thought the show got better and better each week.

Thanks for the review, Cameron. My copy just arrived in the mail. I was a bit worried about the compression with five episodes squeezed onto each disc, but it sounds like I have nothing to worry about.

jcroy said:
I thought the show got better and better each week.

I agree 100 percent. After the pilot, I only came back next week because it aired right after "Doctor Who" on a night with nothing else on. The rare show where each episode is more gripping than the last. By the time the shocking ending to episode eight rolled around, I couldn't imagine how I'd make it another week not knowing what was coming next.

I finally broke out my Blu-Ray copy this week to marathon the first season before the second season starts tomorrow.A strange thing I noticed in the pilot: When Sarah holds up Beth Childs's Ontario drivers license, both the province name and the city are digitally blurred out, like you'd see for nudity on "COPS." At first I thought it was to obscure the location of the show, but the license plates are all clearly Ontario plates and there are other documents with the same address that clearly show Toronto as the city.Anybody else notice this?I also agree with Cameron: The picture quality of this set is stellar.
You must log in or register to reply here.