A freak show would understandably seem a perfect setting for the fourth season of FX’s hit American Horror Story, and indeed it does prove grandly atmospheric and creepy. True to the natures of the previous seasons of the show, however, the storylines teeter-totter in quality and interest during the course of the season and the primary one rather falls apart near the end, but there’s more than enough savagery and dread (along with an unexpected heavy dose of sentiment) dredged up during this season of the show to satisfy its fans, and it’s certainly a great deal more on track than last season’s Coven. 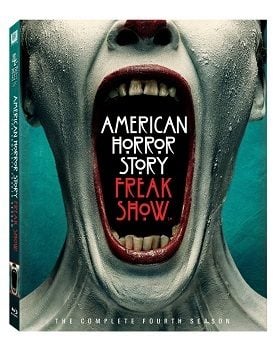 keep case with leaf in a slipcover

Elsa Mars’ (Jessica Lange) Cabinet of Curiosities arrives in Jupiter, Florida, in 1952 on its last legs, one of the last remaining freak shows on the carnival circuit. She knows she needs a socko act to add to her collection of unique individuals in order to draw the crowds, and she finds it with the conjoined twins Bette and Dot Tattler (Sarah Paulson) who can sing together (Dot, the brusquer one, more than Bette who has the sweeter disposition). While the clan adjusts its show to fit the new arrivals, a series of murders and abductions have the town on edge, many citizens believing one of the freaks from the new show being the culprit. Actually, the perpetrator isn’t a member of the show but rather Twisty the Clown (John Carroll Lynch) with a horrifying visage both on and beneath his mask who is killing people and abducting children and young girls to play with. Also wreaking havoc in the area is spoiled, psychotic Dandy Mott (Finn Wittrock) who finds his pampered life boring and begins expressing his rage in a series of his own murders. Also preying on the clan is Lillian Hemmings (Celia Weston), owner of a struggling museum of oddities, who has sent agents Stanley (Denis O'Hare) and Maggie (Emma Roberts) disguised respectively as a Hollywood agent and a medium but actually there to find ways to kill various freaks and send them to her for display. All of the well-meaning, amenably gentle, and guileless carney folk mostly come to be touched in some way by these outside individuals, coming under their spells or destroyed by their malevolence.

The aura of the freak show is enhanced by combining real life human oddities with actors from the show’s repertory company, and the blend is rather seamless despite some of these actors being very familiar to regular viewers of the show. Thus, Evan Peters’ “Lobster Boy” (with claw hands), Kathy Bates’ bearded lady Ethel, Sarah Paulson as the conjoined twins, Angela Bassett as triple-breasted hermaphrodite Desiree Dupree, Naomi Grossman’s pinhead Pepper, and (late in the season) Grace Gummer’s lizard-faced Penny fit right in alongside Mat Fraser’s Paul the Illustrated Seal, Rose Siggins’ Legless Suzi, and the incredible dwarfs Jyoti Amge as Ma Petit and Drew Rin Varick’s Toulouse. During the season’s thirteen episodes, we’re given backstories on many of these characters (including a giant helping of backstories during the dual episodes involving the legendary freak Edward Mordrake (Wes Bentley) who comes looking for a worthy soul to claim), all of which allow them to emerge as real people with real human problems. Ironically, it is they who come off as the kinder, more normal acting and admirable of the show’s characters instead of the mercenary, grasping, and deceitful outsiders and interlopers who cause most of the death and destruction present during the season.

The acting is stellar throughout the season. Foremost among the triumphant performances is Sarah Paulson as twins Dot and Bette, a tour-de-force portrayal for the actress who rises to her greatest heights during this season. The other MVP during the season is Evan Peters who imbues his Jimmy Darling with a winning mix of feisty pride and inward insecurity that makes his character uniquely appealing. Jessica Lange’s jealous, ambitious Elsa Mars has borrowed her accent from Marlene Dietrich (and wants her career, too, as the character). The show anachronistically allows Elsa (and others) to sing songs obviously not of 1952 vintage (“Life on Mars,” “Criminal,” “Come as You Are,” even a music box plays “Love Makes the World Go Round” which wasn’t written until the 1960s) and expects us to believe that Elsa wrangled a long-running television variety series from her very limited talent (one of the weaker wrap-ups in the season’s final three episodes). Kathy Bates is funny and poignant as the dying-from-cirrhosis Ethel, and Angela Bassett blazes forth with sass and attitude as Desiree. Mat Fraser as Paul is also the best of the non-repertory company performers this season. Of the show’s scoundrels, all are really effective: Michael Chiklis as the closeted gay strongman Dell Toledo, John Carroll Lynch’s truly scary, mostly mute Twisty, Finn Wittrock’s unpredictable psycho Dandy (a horrifying shooting spree near season’s end is wonderfully sustained), and Denis O'Hare’s sleazy Stanley all make major impressions. Of the actors with more limited exposure this season, Neil Patrick Harris pops up for a couple of episodes as the schizophrenic ventriloquist/magician Chester Creb, a role not integrated well into the story (and using a combination of a real dummy and actress Jamie Brewer as Marjorie doesn’t work at all). Patti LaBelle as a feisty maid gets some good scenes, and Lily Rabe reprises effectively her nun from the Asylum season hinting that the seasons of this series are all somehow going to tie together, but Matt Bomer is wasted in a one-off as a rent boy at the wrong place at the wrong time.

Here are the thirteen episodes contained on three Blu-ray discs in the season four set:

The program’s widescreen television aspect ratio of 1.78:1 is faithfully rendered in this 1080p transfer using the AVC codec. Picture quality while solid is at the mercy of atmospheric effects such asan eccentric use of contrast, soft focus glamor photography for some of the performers, and occasional clotted black levels during some low light sequences. Color is sometimes bright and impressive, other times desaturated and ghost-like. The episodes have been divided into 12 chapters.

The DTS-HD Master Audio 5.1 sound mix works its effective spell throughout the run of the series though one may find that the rear channels aren’t used quite as imaginatively as the front soundstage in many of the shows. James S. Levine’s background music plays a crucial part in several “boo” moments and is the most enveloping aspect of the sound design. Dialogue has been expertly recorded and is always clearly heard in the center channel. The LFE channel is used quite well to keep a low, rumbling bass going through various episodes to maximize tension.

Two Heads Are Better Than One (10:17, HD): producer Tim Minear comments on the show’s single most difficult achievement this year: pulling off the conjoined twin effect using one actress playing both parts. Sarah Paulson relates the difficulties she faced in playing the parts, while the director of photography and special effects supervisors describe how it was done with behind-the-scenes looks at the filming and layering process. Also offering praise for Paulson’s and the crew’s work to achieve this are Angela Bassett, Neil Patrick Harris, Finn Wittrock, and Denis O’Hare.

Twisty: Behind the Mask of Terror (12:25, HD): Brad Falchuk relates their aim to make the scariest clown ever for the show while actor John Carroll Lynch describes his process of finding Twisty. The show’s make-up and special effects supervisors comment on their work to make the character memorable while production designer Mark Worthington describes what he wanted for Twisty’s creepy bus/home.

Freaklore: The Spectre of Edward Mordrake (9:04, HD): producer Tim Minear describes the real-life character of Edward Mordrake and tells how he was adapted to fit the series. Actor Wes Bentley chats about the fun he had inhabiting the role while producer Brad Falchuk, director of photography Michael Goi, and actors Emma Roberts, Mat Fraser, and Naomi Grossman also comment on the two-part story’s effectiveness.

The Premiere (4:51, HD): the cast walks the red carpet at the show’s premiere in Hollywood.

A generally effective season of American Horror Story (which collected another seventeen nominations and five Emmys this season), Freak Show features dazzling performances from a star-laden cast and really gripping storytelling when the show is firing on all cylinders.

Personally, I got a little weary of Murphy's over-the-top for the sake of being over-the-top style that started with Nip/Tuck and exploded during this series. It stopped being atmospheric creepy and just got to be predictable shocking creepy. And it's always at the expense of good story development.

Hollywoodaholic said:
It stopped being atmospheric creepy and just got to be predictable shocking creepy.
Click to expand...

I know everyone loves the first season but I thought that was purely shock value for the sake of shock value. Like they sat around thinking "What will scare all those little people in the flyover states? I know! Gay sex and bondage gear! That'll blow their simple provincial minds!" I think the second season was the best year for being a scary story without the shock BS or comedic elements. The third and fourth years went for the occasional comedic moments which is probably why I've enjoyed them more than the first two years.

TravisR said:
I know everyone loves the first season but I thought that was purely shock value for the sake of shock value. Like they sat around thinking "What will scare all those little people in the flyover states? I know! Gay sex and bondage gear! That'll blow their simple provincial minds!" I think the second season was the best year for being a scary story without the shock BS or comedic elements. The third and fourth years went for the occasional comedic moments which is probably why I've enjoyed them more than the first two years.
Click to expand...

Yeah, I didn't watch the second or third seasons, but I tried to get into the Freak show season since that seemed ripe for horror. In the end, I think The X-Files episode "Humbug" still stands as the best treatment of that topic (besides the Tod Browning film).

Slowly Freak Show has snuck up to Asylum as my favorites to date. Followed by Murder House and lastly, Coven. The only thing that keeps Freak Show from completely tying (or surpassing) Asylum is the ending. Aside from the Dandy shooting spree, the finale lacked punch and I never really bought Elsa becoming a big TV star, as Matt points out. The finale of Asylum, on the other hand, was very nearly perfect. The perfect storytelling cap to a great season. If only Freak Show had eneded as well. Otherwise, I thought it was a fantastic season.
You must log in or register to reply here.