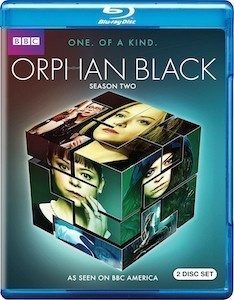 With her daughter Kira (Skyler Wexler) and one-time foster mother Siobhan (Maria Doyle Kennedy) apparently abducted, Sarah Manning (Tatiana Maslany) – troubled grifter and lynchpin to an intricate genetic engineering conspiracy – is leaving no stone unturned trying to find them. The most obvious culprit behind their disappearance is Rachel Duncan (Maslany), one of several clones all bearing and sharing Sarah’s lovely visage. But Rachel, head of the Dyad bioengineering corporation responsible for the cloning, isn’t the only threat to Sarah and her DNA sisters Cosima, Alison and Helena (Maslany, Maslany, Maslany). An extremist cult known as the Proletheans, headed by rancher Henrik Johanssen (Peter Outerbridge), is building on a disturbing vision of the future, denouncing the bioengineering that created the clones but willing to exploit them for its plans. Still, Sarah’s struggle has given her some valuable allies – longsuffering foster brother Felix (Jordan Gavaris), detective Art Bell (Kevin Hanchard), and a former mark who has plenty of reasons to refuse Sarah help, but ultimately doesn’t. But whether he proves as disconnected from the Dyads or the Proletheans as Sarah believes, remains to be seen. Even those who aren’t clones have shown to have more than one face.

Though Orphan Black’s second season naturally lacks some of the unpredictability that made its first year so audacious, the gradual revelations behind the project that gave birth to Sarah and her sistren, along with the Prolethean cult’s twisted religious machinations, keep the show as binge-watch worthy as ever. The departure from the “A” story in the form of clone Alison’s continued suburban breakdown provides some comic relief, but may raise the question of relevance for some viewers, especially with only 10 episodes in the season. At times showrunners play a bit fast and loose with the clones, particularly the seemingly bulletproof Helena, but it meshes well with the gonzo nature of that character and there’s no shortage of intrigue around her unique relationship with Sarah. Maslany continues to portray the multiple clone roles with astonishing facility, both despite and thanks to some seamless cinematic wizardry, making yet another Emmy snub confounding. Fortunately the accolades are plentiful where things really count, giving us another clone-filled season to look forward to in Spring 2015.

Orphan Black: Season Two includes the 10 episodes that aired on BBC America between March and June 2014:

Framed at 1.78:1 and presented in 1080p with the AVC codec, the transfer features inky black levels and contrast that accurately displays the full range of values, even in the frequent nighttime settings. Colors are deep and nicely saturated and flesh tones appear true to life. Detail is especially impressive in facial close ups, but panoramic skylines and establishing shots also look sharp and well defined.

Dialogue in the 5.1 DTS-HD Master Audio track is consistently crisp, clear and intelligible, though the variety of accents in play sometimes requires engaging subtitles. Support for the score in the surround channels is balanced and seamless, as are the occasional environmental and directional effects. Bass activity is clean and nicely balanced with the other audio elements, though frequencies rarely reach LFE levels.

The Clonversation (42:28, HD): Wil Wheaton hosts a pre-season premiere “celebration” of the series with appearances by the cast and crew, celebrity fans Patton Oswalt and Orlando Jones, and various show fans, highlighting key moments from the first season and what followers have to look forward to in the second.

BBC Home Entertainment turns in another stellar presentation for its clone-centric sci-fi drama, Orphan Black. The special features offers some solid glimpses behind-the-scenes, making for a worthwhile release for fans, but also those willing to risk a blind buy on a consistently involving series.

I bought S1 and S2 on blu and heartily recommend them if you want to catch up before S3 debuts.
You must log in or register to reply here.