An animated program taking place in the Star Wars universe some five years before the events of A New Hope, Star Wars Rebels is crammed full of the things Jedi fanatics love, and it’s no surprise that the series was an instant hit with viewers of all ages (though obviously focused on the male preteen crowd). Put together by people who know the Star Wars universe inside and out and dipping just enough into the old, familiar characters from movies gone by to ground the show while concentrating on a new ragtag group of insurgents against the Empire, Star Wars Rebels is enjoyable enough even for those of us who don’t sleep, eat, drink, and breathe the universe of George Lucas’ masterful creation. 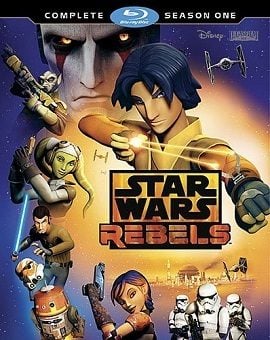 With the Empire making life miserable for all of the people who suffer under their rule, cells of insurgents have been gathering for some time attempting to do what they can to waylay the wicked masters of death and destruction. The show concentrates on an original group of five agitators: former Jedi Kanan Jarrus (Freddie Prinze Jr.), his ace pilot (and sweetheart) Hera Syndulla (Vanessa Marshall), team muscle Zeb Orrelios (Steve Blum), demolitions expert/artist Sabine Wren (Tiya Sircar), and an R1 droid they call Chopper. Into one of their missions drops fifteen-year old orphan/street thief Ezra Bridger (Taylor Gray) who gets scooped up by the rebels and with his own rebellion against authority and a natural dislike of rules seems to fit right in with the other members of the team. And, surprise, surprise, it doesn’t take long for Jedi Kanan to realize that Ezra has the Force within him and thus begins his instruction in mastering his power to become a Jedi Knight. But the lessons are sporadic since the Imperial Forces have several more than capable leaders out to stop the team: sneering Agent Kallus (David Oyelowo) and the even more menacing Grand Inquisitor (Jason Isaacs).

The fifteen episodes in season one are almost all jammed with action sequences, and those who adored the space fights in the live action Star Wars films and the continuous duels with light sabers between combatants will feel right at home with this series even though it's animated. Some of the missions the team goes on are traps set by the Empire which they quite gullibly fall for while occasionally a member of the team (including Ezra early on and Kanan in the season’s final three-episode story arc) get captured by the villains requiring ingenious subterfuges and dangerous infiltrations in order to make the rescues possible. And Star Wars fans will feel right at home with the use of many of the familiar tropes from the films: walkers, TIE fighters, light sabers, and the like. And though the primary cast members are all fresh new characters, expect cameos from some old favorites including R2D2 and C3PO, Lando Calrissian, Yoda, Obi-Wan Kenobi, and, naturally, Darth Vader.

The voice cast is outstanding from the most important characters to the occasional word from a TIE pilot or a downtrodden villager. Freddie Prinze Jr. is especially charismatic as Kanan, and Taylor Gray evinces all of the traits one would expect of a fifteen-year old boy: headstrong, stubborn, enthusiastic but easily distracted, quick to take offense, get angry, or emotionally hurt. Steve Blum does a great job adding most of the comic relief (along with the droid Chopper) with his muscle-bound galoot who is hard on the outside and marshmallow soft on the inside. And the program’s two major villains voiced by David Oyelowo and Jason Isaacs sound viciously evil without overdoing the sinister qualities of their characters or sinking to stereotypical maniacal laughter to express their wicked natures.

Here are the fifteen episodes found on the two enclosed discs in the season one set:

The transfers are framed at 1.78:1 and are presented in 1080p using the AVC codec. Sharpness is outstanding throughout, and color depth and reproduction is beautiful and consistent with no blooming. The character animation will remind you of the in between examples one often sees on CG animated features as the movies are readying themselves for the final animation passes, but the look is consistent and quickly becomes the status quo for the series, and that doesn’t negate any of the really finely detailed background art or action sequences which get the more realistic CG treatment. The black levels of space are inky black and quite impressive. There is occasional evidence of banding in lighter colored backgrounds, but this anomaly occurs quite infrequently. Each episode has been divided into 5 chapters.

The Dolby Digital 5.1 sound mix is aggressively present in all available channels with thundering bass to give tremendous rumble to the LFE channel and split effects that provide the kind of immersive movie-like experience one takes for granted in theatrical sci-fi presentations but which he rarely gets in television productions. Dialogue has been well recorded and is mostly found in the center channel though there is an occasional bit of directionalized dialogue. The music by Kevin Kiner (with occasional themes based on the original scores by John Williams) also adds enormous presence to all of the scenes being offered in both the fronts and rears. A half point has been deduced from the score for the lack of a lossless high definition mix. Otherwise, this is reference quality work.

Rebels Recon (81:12, HD): StarWars.com host Andi Gutierrez along with producers Dave Filoni, Simon Kinberg, the star cast, special effects supervisor Joel Aron, and art director Kilian Plunkett offers the on-line scoop on each of the program’s episodes from season one. Each of the programs offers a quick introduction to the episode’s plot, some background information on the production, and then presents previews for the next episode. The programs can be played all together or accessed separately.

Star Wars Rebels: The Ultimate Guide (22:05, HD): Freddie Prinze Jr. narrates a recap of the first season introducing each of the characters and discussing their journeys during the fifteen episodes.

Rebels Season 2: A Look Ahead (7:06, HD): producer Dave Filoni previews some character growth occurring during the second season via storyboards and then presents about three minutes of film clips from the upcoming season.

Star Wars Rebels Shorts (each one 3:02, HD): four brief and amusing stories featuring a member of the crew in a short adventure: “The Machine in the Ghost” features Chopper, “Art Attack” showcases Sabine, “Entanglement” spotlights Zeb, and “The Property of Ezra Bridger” focuses on everyone’s favorite sneak-thief.

Star Wars Rebels offers a fresh but familiar set of adventures for fans of the Force (young apprentice being trained by a Jedi master while enjoying the camaraderie and support of an eclectic group of friends), and this Blu-ray release of the first season offers outstanding picture and sound and some exhaustive bonus material. Recommended!

I picked this up today and I love this show. I am just disappointed by the lack of lossless sound.

Wayne_j said:
I picked this up today and I love this show. I am just disappointed by the lack of lossless sound.

It's most likely the changeover from Warners to Disney. WB had the first 5 years of The Clone Wars and Disney had S6 and Rebels.

My only complaint is that they divided up the pilot/first episode into two parts instead of as originally broadcast. Ah well - I can deal.

I really enjoyed watching this with my kids. It was something we could equally enjoy together and there aren't too many shows on TV I can say that about.


It's nice to know what these bonus features are, since the discs don't tell you what they are until you start to play them.


I don't know why I falsely thought the season 2 premiere with Vader was going to be on here. Thanks goodness I did not delete that off of my DVR.

Wayne_j said:
I picked this up today and I love this show. I am just disappointed by the lack of lossless sound.

Just picked up mine at Target. It was the last Blu-ray on the shelf!!


This is a "blind buy" for me as I was waiting for the Blu-ray release to view these eps. But I really enjoyed "The Clone Wars" and everybody tells me this new series is even better! Can't wait to get home tonight!!


BTW: Target had their entire DVD/Blu-ray stock of this title in their "For the Kids" section!

I really need to ask a Best Buy manager about creating a "man-child" section. This would greatly enhance one-stop shopping for me.

Tony J Case said:
My only complaint is that they divided up the pilot/first episode into two parts instead of as originally broadcast. Ah well - I can deal.
Click to expand...

Just to be super nerdy: I'll note that in addition to that, they also use the extended version of the first episode (the minute long opening scene with Darth Vader and The Inquisitor was added to a special airing on ABC) rather than the original cut of Spark Of Rebellion.
You must log in or register to reply here.