National Lampoon's Vacation, the family road trip comedy that arguably features Chevy Chase's best on-screen performance, is receiving a double-dip release on Blu-ray for its (gulp - prepare to feel old), 30th Anniversary. This release features an identical audio/video encoding and all of the sparse collection of extras from the previous August 2010 Blu-ray release. The single new enticement for fans of the film is a feature length documentary on the film's production that was produced in 2011 for the A&E television network. 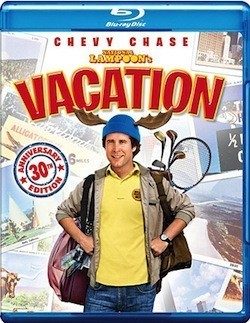 Directed by: Harold RamisStarring: Chevy Chase, Beverly D'Angelo, Anthony Michael Hall, Dana Barron, Imogene Coca, Randy Quaid, and John CandyNational Lampoon's Vacation follows the misadventures of the Griswold family as they make a cross country trek in their "Family Truckster" station wagon from suburban Chicago to Southern California, home of the famed "Wally World" theme park. The family, consisting of father Clark (Chase), mother Ellen (D'Angelo), son Rusty (Hall) and daughter Audrey (Barron) suffers an episodically comic series of mishaps and embarrassments over the 2,400 mile trip that pushes patriarch Clark to his breaking point.National Lampoon's Vacation was arguably Chevy Chase's most successful foray into feature films, rivaled for that position only by Caddyshack, Fletch, and the Christmas-themed follow-up National Lampoon's Christmas Vacation. Ironically, Chase achieved this particular success in a role that abandoned his signature "I'm Chevy Chase and your not" coolest and funniest guy in the room persona and only made sparse use of the other go-to weapon in his established comic arsenal: pratfalls. (Never fear, though, the film does feature a couple of choice bits of physical comedy including an amusing scene where Chase attempts to refuel his new station wagon). By adapting the role of a frustrated middle aged parent, initially underplaying that frustration, and stepping back into a supportive straight man role as he encounters a bevy of humorous characters throughout the film, Chase proves to be an effective comic everyman who provides a through-line to the episodic script.The film shored up the then wavering reputation of the "National Lampoon" brand, helped launch the big screen career of screenwriter John Hughes, and established that director Harold Ramis' success with Caddyshack was no fluke. Ramis proves to be a very good actor's director as he coaxes well-modulated comic performance from actors as inexperienced as teenagers Hall, Barron, and Jane Krakowski, while deploying both broad and underplayed comic depth charges from an array of veteran character actors inclusive of Eugene Levy, John Candy, Randy Quaid, Miriam Flynn, Brian Doyle-Murray, James Keach, Eddie Bracken, and comedy legend Imogene Coca.John Hughes adapted the screenplay from an article he had written for the National Lampoon magazine, and its fresh blend of the familiar, satiric, and the profane managed to connect with a broad audience, many of whom were likely within the demographic being satirized. Hughes and Ramis may be laughing at the middle-American squares, but they clearly have a great affection for them at the same time. This allows them to get away with a lot of R-rated fun and politically incorrect shenanigans without losing the audience's sympathy. Hughes would continue to experiment with this balance through a very successful run of films as a writer and/or director for the next decade.

The 1080p VC-1 encoded presentations approximates the film's original theatrical aspect ratio by filling the whole 16:9 frame. I was not able to detect any visible differences between this release and the previous Blu-ray released from three years ago, and the fact that Warner has not been using the VC-1 codec for the last couple of years suggests that it likely is identical. That is not necessarily a bad thing as the presentation is pretty solid.The film has a certain softness and exhibits contrast gradients that drop off quickly to black, both characteristics of a lot of early 80s film productions. The transfer and digital encoding stay faithful to the film's original look, with no signs of any significant film damage and no visible artifacts of whatever digital tools may have been used to clean the source element up. Grain looks natural, and the balance between the softer optical shots (such as the opening titles) and the rest of the film is noticeable to attentive viewers, but handled well by the colorist to prevent jarring transitions.

The film's soundtrack is encoded as a lossless DTS HD-MA mono track. Music and effects are presented with acceptable fidelity. Dialog is clear, but frequently has a slight but noticeable harshness to it with mildly distorted dynamic peaks. Alternate language Dolby Digital mono tracks are available in German, Latin Spanish, and Castilian Spanish with subtitles available in English SDH, French, German, Spanish (Latin), Spanish (Castilian), Danish, Finnish, and Norwegian. Even if you are not normally inclined to watch with alternate language options, I bet you are just a little bit curious about how the translators and dubbers dealt with the line "You'll be whistling Zippidy Doo Da out of your a--holes".

Introduction by Chevy Chase, Randy Quaid, and Matty Simmons (480i 4:3 SD video - :44) This brief clip from 1993 features Actors Chase ("Clark Griswold") and Quaid ("Cousin Eddie") seated with Producer/National Lampoon Founder Matty Simmons. They goof their way through an introduction/welcome to the 20th Anniversary DVD release of the film.Commentary by Harold Ramis, Chevy Chase, Randy Quaid, Anthony Michael Hall, Dana Baron, and Matty Simmons This feature originally appeared on the 20th Anniversary DVD release of the film (on which it was referred to as "Griswold Family Commentary"). Recorded separately from the rest of the participants, Director Harold Ramis carries the lion's share of the commentary. All other participants were recorded together. The end result is a leisurely paced but reasonably informative commentary. Ramis' previous solo commentaries had a tendency to be a bit dry, and the intercutting between Ramis' production information downloads with the occasional cast interactions and reminiscences from Chase, Simmons, Quaid, Hall ("Rusty"), and Baron ("Audrey") helps to make it a modestly enjoyable listen.Inside Story: National Lampoon's Vacation (VC-1 Encoded 1080p Video - 1:24:49) is a made for TV feature length documentary produced by the A&E Network in 2011. With its extended running time and large cast of interview subjects, one expects a fairly comprehensive overview of the film, and, for the most part, that is what it delivers. The editorial style is very jumpy and seemingly catered to short attention spanned viewers with many opportunities for commercial breaks. Quotes from interview participants rarely go beyond a few seconds, and a lot of the interview pieces are repeated multiple times as if the documentary is constantly teasing what it may show next. On-camera comments are provided by cast members Chase, Hall, Barron, Christie Brinkley ("The Girl in the Ferrari"), Beverly D’Angelo ("Ellen Griswold"), John Diehl ("Assistant Mechanic"), Miriam Flynn ("Cousin Catherine"), Christopher Jackson ("Pimp"), Mickey Jones ("Mechanic"), James Keach ("Motorcycle Cop"), Jane Krakowski ("Cousin Vicki"), and Eugene Levy ("Car Salesman"). The production team is represented by interviews with Ramis, Simmons, Production Assistant Trevor Albert, Casting Director Susan Arnold, Production Manager Bill Borden, Studio Executive Mark Canton, First AD Robert P. Cohen, Director of Photography Victor J. Kemper, Location Manager Sam Mercer, Animal Trainer Jules Sylvester, and Stunt Coordinator Dick Ziker.Theatrical Trailer (480p 16:9 video - 1:26) Is a standard for its era low-budget trailer emphasizing the better known members of the film's ensemble cast with a lot of voiceover narration.

This release of National Lampoon's Vacation is a no-brainer recommendation for first time purchasers as it features the best available A/V presentation of this classic 80s comedy, all of the contents of the previous Blu-ray, and an additional feature length documentary - all for a modest price. Owners of the previous release have a tougher decision since the cost to upgrade will buy them the A&E documentary, but no other new features or upgrades in audio or video quality. 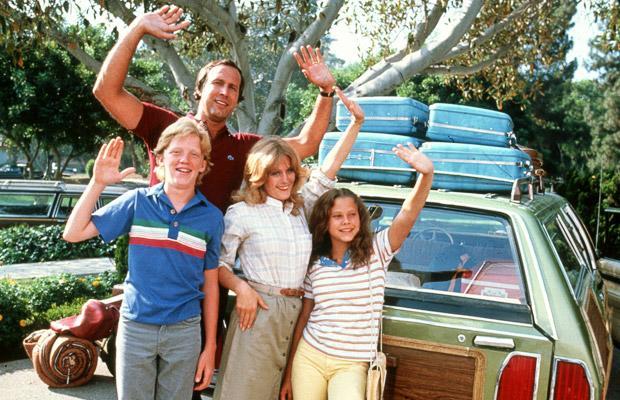 For alternate perspectives on the film and assessments of previous releases on Blu-ray and DVD, readers may want to check out Cameron Yee's HTF review of the original 2010 Blu-ray release of this title and/or Herb Kane's assessment of the 20th Anniversary Special Edition DVD release from 2003.

They still didn't fix "I'm So Excited", so still no sale.

For those keeping score at home, The Pointer Sisters' "I'm So Excited" still appears as in the original theatrical showings on the German and Latin Spanish audio tracks on this Blu-ray. June Pointer's "Little Boy Sweet" is substituted for it on the English and Castilian Spanish tracks.

Oh, and for a different kind of music substitution, the song Clark tells his family they wil be whistling out of their a--holes on the French subtitle track is "Viens, Poupoule" instead of "Zip-a-Dee-Doo-Dah".

I'm not your ordinary everyday FOOL!

Gotta upgrade this classic someday. This would be a good one.

I really can't justify upgrading from my current BD...especially since I haven't even watched it. Maybe one day when it's in a discount bin somewhere, I will. Right now, an extra doc just isn't enough of a "gotta have."

WOW No idea that "Little Boy Sweet" wasn't the original song - I've never seen this movie without it so it would be weird to have I'm So Excited drop in now.I actually love LBS so much I used it as the temp main title track for my first feature, as the guide for the composer.

I think I saw it once with I'm so Excited. Probably the numerous VHS rentals in the 80s, or on cable maybe? I've gotten used to the replacement but would prefer the original restored since I do associate it with this. well, I also associate the replacement...

I would have to double check the disc to be sure, but I think "Little Boy Sweet" was used for the "sandwich scene" in the original, but "I'm So Excited" was used for the other on-road encounters with Brinkley in the Ferrari. The revised version that has been on just about every English language home video release uses "Little Boy Sweet" for everything. I will verify after work today unless someone beats me to it.
E

Ken_McAlinden said:
For those keeping score at home, The Pointer Sisters' "I'm So Excited" still appears as in the original theatrical showings on the German and Latin Spanish audio tracks on this Blu-ray. June Pointer's "Little Boy Sweet" is substituted for it on the English and Castilian Spanish tracks.

Oh, and for a different kind of music substitution, the song Clark tells his family they wil be whistling out of their a--holes on the French subtitle track is "Viens, Poupoule" instead of "Zip-a-Dee-Doo-Dah".
Click to expand...