Mystery Science Theater 3000: Volume XXXIII benefits from a better selection of episodes than the last few sets, including fan favorites Daddy-O and Agent For H.A.R.M., plus Earth vs. the Spider and Teen-Age Crime Wave, and throwing in some fun bonus features centered around the films featured in each episode. 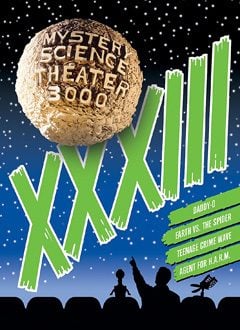 In the not too distant future, somewhere in Deep 13....

This 33rd volume starts off with the Joel-hosted Daddy-O from season 3 (Experiment #307), a juvenile delinquent exploitation film from 1958 starring Dick Contino as Phil Sandifer, a truck driver by day and accordion-playing singer by night, who meets up with Jana Ryan (Sandra Giles), a young blonde who likes to drag race. The two wind up working at the same night club, Phil taking center stage when he’s not running errands for the boss (played by Bruno VeSota), and Jana as a cigarette girl. Phil eventually finds out those errands are shady when he ends up on the wrong side of a double-cross. The feature is preceded by the Castle Films classroom short Alphabet Antics, an annoying run-through of the alphabet that is very often not politically correct by today’s standards. My favorite riff from the short is “P is for PETA, who’s boycotting this.” The riffing in the short never overpowers the feature, including some great lines: “Daddy-O, must be Harry-O’s father;” “John Frankenheimer directs Race for the Pita;” “This is great, we’re having an adventure just like The Goonies!” and “Coming up on Dead Plot Curve.” With the exception of the invention exchange (Joel has the air-freshener mobile, while Dr. F shows off the alien teething nook), the host segments are centered around the feature film, with Joel parodying Phil’s hiked up pants with the song Hike Your Pants Up, re-enacting the drag race scene, and Joel gives spit-take lessons, ending with a defective Deep 13 button during the end credits crawl.

Experiment #313 features the Bert I. Gordon film Earth vs. the Spider, preceded by the Centron-produced educational short Speech: Using Your Voice where an unpleasant-sounding professor provides examples of good and bad speech practices. Earth vs. the Spider is a typical 1950s giant insect thriller with some decent special effects (for its time) by the film’s director, where a giant spider is awakened from its cave and terrorizes a small town (on the Universal backlot). This is an episode where everything is in synch, terrific riffs, amusing host segments, and a fun movie. Some of my favorite riffs include: “E.C. Buehler, must be his day off;” “Ven David Duke is elected, ve vill take over ze country;” “Hey, Charlotte, it spells out a word;” and the return of “We’re having an adventure just like The Goonies!” Host segments include Crow and Tom going Inside the Robot Mind, the Mads invent the cheese phone while Joel shows off his CD hair dryer, Crow has Tom and Joel read his screenplay for Earth vs. Soup, and Crow and Tom report on Bert I. Gordon.

Another juvenile delinquent exploitation film finds its way in Experiment #522, Teen-Age Crime Wave, a cautionary tale about teenage hoodlums escaping from a detention facility and kidnapping an old couple at their farmhouse over the Thanksgiving holiday. The episode is average, partially due to the slow pacing of the movie, but there are still some good riffs: “Deuteronomy is a hoot;” “I hear the secrets that you keep, when you’re talking in your sleep;” and the final riff of the episode “Go ahead, let it out, have a teenage cry wave.” The host segments fare slightly better, with Mike and the bots trying to escape during the invention exchange while Dr. F demonstrates his mace mousse, Mike and the Bots salute the “doughy guy,” Mike and the Bots start their own deli in space, Mike and the Bots perform a Mystos commercial, and a return of the faulty Deep 13 button as Frank gets continually doused by Dr. F with mace mousse.

The real gem in this set, though, is Experiment #815, Agent For H.A.R.M., an unsold TV pilot for a possible series that was released to theaters in 1966 about a secret agent, Adam Chance (a miscast Peter Mark Richman), who must protect a scientist and his niece from Russian spies that want the doctor’s spore formula (which reduces humans to a pile of foaming green goo) in an attempt to take over the world. The movie is corny as all get go, with phrases such as “Better go back to the judo range” and “Well, my job is to the apple pie on the table, and nobody asks me how I do it!” and action sequences that never even reach a climax. This leads to riffs such as “Meet me at the karate rink later;” “Then go practice your skeet kendo and bring your aikido rifle;” “Huge Angular Red Marshmallows;” “Heuristic Analog Rental Meat;” and “He maintains an appliance! Duh-da da da!!” There are also tons of riffs on the henchman who bears a striking resemblance to Prince. The host segments are odd and humorous, part of the mandate by the Sci-Fi Channel for the series to have a continuing plot line, as Mike stands trial for destroying three planets. Much of the humor comes from Bobo’s attempt to act as Mike’s defense attorney, often going off on a tangent about food. I’ve often considered this episode as one of the best from the Sci-Fi era.

The only fair thing to do is to judge the host segments, and the quality improves as you get later into the series. Discs one and two have some minor softness to it, but colors are consistent. The remaining discs are excellent, with increased detail and well-defined colors. Throughout all four discs, however, there are some brief minor anomalies inherent in the broadcast masters, such as dropouts, but these are few and far between.

The only fair thing to do is to judge the host segments, and the quality improves as you get later into the series. Discs one and two have some minor softness to them, but colors are consistent. The remaining discs are excellent, with increased detail and well-defined colors. Throughout all four discs, however, there are some brief minor anomalies inherent in the broadcast masters, such as dropouts, but these are few and far between.

As with Shout! Factory’s other MST3K boxed sets, the menu designs on each disc are themed with the episode, with new puppet animation, and are very funny. Also included in the set are a set of original comic book style mini-posters for each episode, identical to the DVD covers, created by Steve Vance. All four discs come housed in THIN-Pak keepcases inside a paperboard sleeve.

Disc One (Daddy-O):
Beatnick Blues: Investigating Daddy-O (9:01): A look at the teen exploitation films of the 1950s and Daddy-O, in particular. Produced by Ballyhoo Motion Pictures.

MST Hour Wraps (5:32): Mystery Science Theater Hour was a short-lived hour-long version of the series for syndication (splitting each original episode in half), with Mike Nelson, in his Jack Perkins character, bracketing each episode.

MST Hour Wraps (5:17): Mystery Science Theater Hour was a short-lived hour-long version of the series for syndication (splitting each original episode in half), with Mike Nelson, in his Jack Perkins character, bracketing each episode.

Disc Three (Teen-Age Crime Wave):
Film It Again, Sam: The Katzman Chonicles (22:24): A look at the career of film producer Sam Katzman, in yet another terrific documentary from Ballyhoo Motion Pictures.

Disc Four (Agent For .H.A.R.M.):
Peter Mark Richman: In H.A.R.M.’s Way (8:11): The actor who plays Adam Chance talks about his career, his experiences on the set of H.A.R.M., and his disappointment with Universal’s misspelling of his name in all of the promotional materials for the film.

The last few volumes of MST3K have been somewhat disappointing, with no real standout episodes and weak bonus features. Volume XXXIII puts that to rest, with three out of the four episodes being winners and overall some really interesting documentaries on the films themselves.

This is rare one for me where all 4 of them i have never seen so this will be a easy buy for me. Now i have to make room for my 18th box set of MST and hope more to come. My local PBS station just started to air MST episodes and they were showing Gunslinger.
You must log in or register to reply here.