The favorite TV family of the 1980s returned for a second season of The Goldbergs on ABC, sticking with the formula that worked well in its first season, but still allowed for some growth in the series characters. 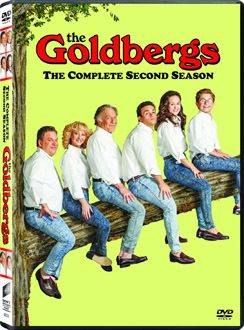 Set in 1980s Jenkintown (a suburb of Philadelphia), The Goldbergs is based, rather loosely, on creator Adam F. Goldberg’s childhood, videotaping his family and documenting the insanity of living in that household (actual clips often are used in the end credits of various episodes). The family consists of father Murray (Jeff Garlin), who runs a furniture store and lovingly refers to his children as “morons.” Smother Beverly (Wendi McLendon-Covey) is a woman who controls and manipulates everyone around her, refusing to acknowledge that her home will become an empty nest in a few short years, and has a tragic story that warned of the dangers of everything. Older daughter Erica (Hayley Orrantia) is a moody, rebellious teenager with a nerdy interior. Middle son Barry (Troy Gentile) is a wannabe jock and rapper with anger management issues. Youngest son Adam (Sean Giambrone) is a film geek struggling with puberty and dealing with bullies. Finally, Pops (George Segal) is a widower turned ladies man who loves his grandchildren but gets easily frustrated (yet is always around to provide advice). Patton Oswalt lends his voice to narrate the show as the grown-up Adam.

Although relying on the same formula that was established in its debut season, there is a lot of growth for nearly all of the major characters. Barry and Adam learn the ropes of having and trying to keep a relationship with a member of the opposite sex, ending on an upbeat for Barry and a heartbreaking season finale for Adam. Erica and Beverly come to the realization that Erica will be leaving the house for college in less than a year, and a possible singing career. And Murray reconnects with his father (played to the hilt by sad-eyed Paul Sorvino), beginning to forgive the man who abandoned him and his brother at a young age. As was the case last season, an entire episode was dedicated to honoring one of Adam F. Goldberg's favorite movies of the 1980s. Last year it was The Goonies, and this season's Barry Goldberg's Day Off is a very much a love letter to John Hughes and Ferris Bueller's Day Off. Rather than spoofing or cloning that iconic movie, Barry and Adam try to recreate it (with disastrous but humorous results) with help from Pops.

Disc One
Love Is A Mix Tape
Mama Drama
The Facts of Bleeping Life
Shall We Play A Game?
Family Takes Care of Beverly
Big Baby Ball
A Goldberg Thanksgiving
I Rode A Hoverboard

The Goldbergs is broadcast on ABC in 720p, and the episodes are presented on this DVD set in 1.78:1 anamorphic widescreen in 480p. For DVD, these look pretty darn good, with solid colors and black levels, and fairly good detail. My cable company, Cox, seems to heavily compress all of their channels, so in some ways, the upscaled DVD is actually an improvement with far fewer compression artifacts, if any.

The Dolby Digital 5.1 tracks, at 448 kbps, are about what one would expect from a sitcom. Dialogue is clear and mostly directed to the center channel, with some occasional left, right, and surround activity when the 1980s soundtrack kicks in.

The second season set does not include any commentaries this time out. In fact, Adam F. Goldberg's presence on this set is minimal, at best, showing up in some behind the scenes footage in one of the featurettes, but never in an on-camera interview.

Disc One:
On Location with Sean Giambrone (9:40): Sean takes the viewer through a typical day of shooting on location while filming the episode The Lost Boy.

Deleted Scenes (5:40): A set of eight deleted, extended, or alternate scenes from the episodes included in Disc One, with timecode and temporary voice over tracks.

Disc Two:
Making "Barry Goldberg's Day Off (9:26): The cast and crew talk about making this episode.

Deleted Scenes (4:07): A set of eight deleted, extended, or alternate scenes from the episodes included in Disc Two, with timecode and temporary voice over tracks.

Disc Three:
On The Set With Wendi McLendon-Covey (11:36): The actress takes the viewer through a typical day on the set for the actress.

Deleted Scenes (3:32): A set of nine deleted, extended, or alternate scenes from the episodes included in Disc Three, with timecode and temporary voice over tracks.

The Goldbergs remains one of the funniest and best written comedies on broadcast television, and the second season was no exception, which broadened supporting characters while deepening its core leads. The special features are a bit sparse compared to the previous season, but there’s still much to enjoy.

This is one of my favorite shows on TV and my favorite comedy. When school started up this year we threatened to make my son wear a train sweater on the first day. We bought Season 1 on DVD but it is never here as so many people who missed the show have been borrowing it. Like Firefly I think I need to get a second copy of the show so I always have one on hand.

Adam Gregorich said:
This is one of my favorite shows on TV and my favorite comedy. When school started up this year we threatened to send him on the first day in a train sweater. We bought Season 1 on DVD but it is never hear as so many people who missed the show have been borrowing it. Like Firefly I think I need to get a second copy of the show so I always have one on hand.
Click to expand...

I will have to pick up one to use for our reserve copy! Way to get your review noticed by the one and only Adam Goldberg!